How did the Sixers let T.J. Warren score 53 points? 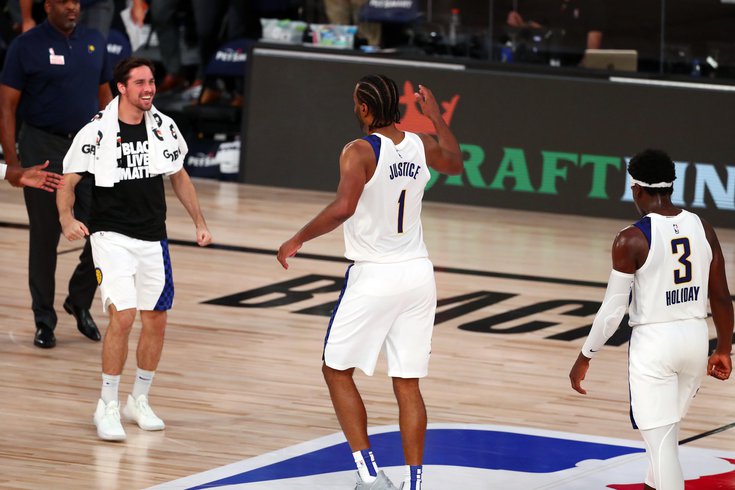 Indiana Pacers forward T.J. Warren (1) reacts during the first quarter of a NBA basketball game against the Philadelphia 76ers at Visa Athletic Center.

Seriously, how did the Sixers give up 53 points to T.J. Warren in the opening game of the Orlando restart?

It started, it seems, with an inability or unwillingness to react to what was happening right in front of them.

"Give him credit, he was hot, but too many times we were guarding him like he wasn't on fire," Tobias Harris said Saturday evening. "We gave him too much space, just not enough credit in his ability to score. He punished us tonight."

"I think the space we gave him was too generous. I think when you have Matisse [Thybulle] and Ben [Simmons] who are the primary defensive assignments, you normally feel comfortable that those two can tag-team a player, and he was great tonight," Brett Brown added after the game. "Maybe we could have double-teamed sooner than we tried to. They have tremendous three-point shooters behind the double team, so you try to pick your poison. I thought in the first quarter, first part of the game, he got out and was sensational, and the physicality as it relates to the whole game wasn't at the level where we needed it to be."

Those ideas can be examined with tape, in ways that will coincide but also conflict with what the team had to say about their defensive effort.

"I think the space we gave him was too generous"

If I were running a fact-checking service, I would rate this statement as mostly true. It would be overstating it to say they let Warren roam free for most of the game, but their reaction to Warren's game lagged behind, well, Warren's game.

Warren is not a dominant scorer, but putting the ball in the hoop is absolutely his calling card, and has been since he entered the league. There is no shame in letting a professional scorer get off to a hot start. And before his avalanche of jumpers began in earnest, Warren had to earn some tough points inside the arc to get his night started.

But when a guy puts up 29 points on 12/14 shooting in the first half and just starts pulling up for heat-check shots from 35 feet, you have to adjust accordingly.

The topic, Brown says, absolutely came up with the team during the game.

"Anytime someone comes out and has the first period he has, it's a pretty easy conversation," Brown said. "It's not a mystery coming back at the end of the game saying oh, how did he score, I can't believe it, you just got to pay attention to the first period and you have some issues. We just didn't get it done the way we needed to get it done. Some of it is just, maybe initially playing again? I don't know. But he certainly had a hell of a game and you got to give him credit."

Still, the issues persisted. In a Pacers four-on-five early in the fourth quarter, no one stops to think that they should move off of their assignment to pick up Warren in the trail position, allowing him to step into an easy three.

With the game winding down later in the fourth quarter, the Sixers tried to play some pressure defense to turn the Pacers over and claw back into it. The motivation is easy to understand. But pressure does not necessitate the abandonment of structure or awareness. Aaron Holiday breaking the full-court pressure doesn't compromise your defense. Simmons abandoning Warren to try to correct that broken pressure does, and it gave Warren the easiest look he got all night for his 48th, 49th, and 50th points.

And look, end-game defense is tough. Guys make panicked decisions on both sides of the ball with the clock ticking down. But Simmons has often been at his best on defense during these situations, creating turnovers and earning stops when they count. But sagging off of Warren to help on a Holiday drive (which didn't appear to be in much danger, by the way) is just ridiculous. He was punished for it.

While we're on the topic of Mr. Simmons...

Once again, our fact checkers have consulted the truth-o-meter and agree with Brown's claim. Simmons is in the midst of an All-Defense campaign, and Thybulle has been one of the most disruptive rookie defenders in recent memory. They have not struggled with the T.J. Warren types around the league this season, and have blanketed better players on many occasions.

In limited reps on Warren, Thybulle showed the level of discipline the Sixers needed to contain him, if not stop him. This possession from the end of the first quarter is textbook: Thybulle tracks him through the sideline out-of-bounds play, plays him relatively tight, refuses to bite on the pump fake, and offers a good contest that leads to a rare Warren miss.

Thybulle, quite frankly, wasn't given much of a chance to make an impact. The rookie played just 11:46 on Saturday night, one of the many marks against Brown on Saturday evening. With a wing giving you fits and your defense a mess for most of the night, giving your best defensive weapon on the bench more burn seems obvious.

Simmons was the real problem, or at least not the solution, on Saturday night. He does not lack for anything as a defensive player — speed, strength, agility, intelligence, there's nothing holding him back except for his effort on most nights.

Before this season, that last part was all that separated him from being an all-world defender. This year, he has been a leader for Philadelphia on that end, picking up the slack with Joel Embiid toggling on and off at times.

But Simmons, perhaps because it was the first real game they've played in four-plus months, was just off. There were numerous occasions where he simply wasn't ready to explode out of his defensive stance, allowing Warren to run right by him for an easy entry.

Because Simmons and Thybulle are gamblers, they often have to rely on their recovery speed to get them back into plays and in position to get stops. In a weird way, being used to closing gaps and leveraging your speed is an asset for Simmons, allowing him to mix up his approach and keep guys off-balance.

But when you're constantly chasing the game, you start making uncharacteristic mistakes and losing your sense of place on the floor. Simmons compounded that with, well, we can call it sub-standard effort to get back within range of Warren. He never locates the rim, and Warren is able to go right past him without having to lift his pivot foot.

In the sense that this gives the coaching staff clips to hound Simmons about during film study, this can be turned into a productive loss. These are mistakes many thought he'd put in the past, and they're pretty much all correctable.

But his space cadet performance on defense goes a long way toward explaining the Warren outburst. Playing up in the face of a hot shooter is something understood by basketball players intuitively, even guys with beer guts playing in pickup leagues. When your best perimeter defender is abandoning the assignment, falling asleep on cuts, and not trusting teammates to win their own assignments, the system collapses. Basketball is a game where one guy can dominate, which means it's also a game where one guy can flush the integrity of your defense down the toilet.

For long stretches of Saturday's game, Simmons did just that. While he wasn't the only Sixers player to come up short there against Indiana, he was the guy who was tasked with defending the 53-point scorer. He has earned the benefit of the doubt with his play all season, so it's not a performance I'd expect a repeat of, but there's not enough lipstick in the world to pretty up this pig.

Luckily for the Sixers, they get right back to work again on Monday. Improving on this effort won't be difficult.