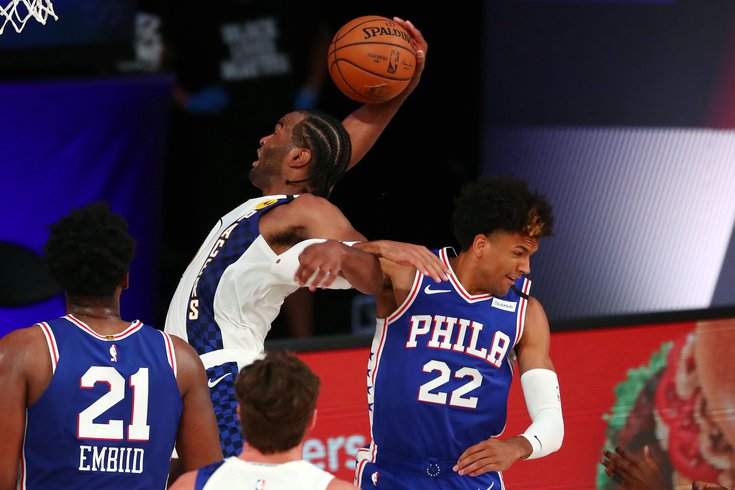 T.J. Warren had a ridiculous 53 points to lift the Pacers over the Sixers Saturday.

Joel Embiid had a dominant opening game in Orlando, but a 53-point game from Pacers forward T.J. Warren ended up being the difference in a 127-121 Sixers loss to kick off their restart schedule.

• This was not Joel Embiid's best game in any respect. He drifted defensively at times, coughed up lazy turnovers, and of course, had the heated exchange with Shake Milton on the sidelines.

But then there was the offensive side of the game, where Embiid (41 points, 21 rebounds) was the biggest and baddest dude in the gym from the moment he stepped on the floor. Within the game's first ten seconds, he drew Myles Turner's first foul. On the very next possession, he used Turner's newfound passiveness against him and scored easily at the rim. Within minutes, he baited Turner's second foul, and look, you get the picture.

Without Domantas Sabonis available for Indiana, the Pacers were woefully undersized in the paint. But this wasn't a case of simply feeding Embiid in the post over and over again, wearing down the Pacers with his back to the basket. Those touches were combined with an aggressive approach to offensive rebounding, leading to a healthy dose of second-chance points and extra possessions for Philadelphia. There was no stopping him on the glass.

Embiid has sort of owned Turner historically, so it wasn't a total surprise, but this is the guy the Sixers need to get if they want to contend for a championship. In a game that could be described with words like chaotic, scattered, or "complete roller coaster," the one constant was the big man dominating. That's their path to victory, now, tomorrow, and always.

• This is going to come off as an insult, though it certainly isn't meant like one — if Tobias Harris (30 points) can consistently be Philadelphia's third-quarter guy, it would make a meaningful impact on the upside of this team.

Harris can be somewhat of a boom-or-bust player for the Sixers, which is really just a reflection of how his touches and role can change on a given night. In Orlando, granted in a very limited sample, he has done his part to actively seize the game after halftime and take charge during a quarter that has been a trouble spot for them all year.

Turns out, when you don't completely collapse for an entire quarter, it changes the complexion of a game. Harris did a lot of his best work in transition on Saturday night, turning runouts into buckets at the rim and Indiana fouls, or at worst, a good look from three. He sprinkled in some bully ball of the smaller Victor Oladipo in the mid-post, and with that, he held down the fort without Embiid on the floor.

• I don't really know what to make of that Ben Simmons game. He filled up the box score (19 points, 13 rebounds), made some spectacular individual plays, and ostensibly was "good" in that respect. But it didn't feel like an impactful Simmons game. He has built a case to be first-team All-Defense this season, but he wasn't especially helpful in slowing down TJ Warren, who tortured the Sixers all night.

I expressed some optimism on Saturday morning about the progress of his shot and the mentality attached to it. But the same old problems are there:

Whether you call Simmons a guard or forward, he & Embiid are both at their best in the paint. He's spaced here, but his unwillingness to shoot erases the advantage gained by the double-team. pic.twitter.com/ytnUi1gfvU

I agree with the assessment of my colleague Rich Hofmann. Simmons has a number of things he can do there to help himself and/or the team. Standing still on the perimeter and not shooting isn't on the list.

• There's always an excuse for Al Horford. Well, he's in a lineup that is tough for all the top players. Well, he's not in a defensive scheme that suits his strengths. Well, he probably isn't healthy, and will look better in Orlando.

Offensively, it wasn't any better. For all the concern about Embiid's style of play and how he allegedly shoots too many jumpers, at least Embiid wields his physicality at times. Horford attempts layups and jump hooks as if he's in perpetual fear of being blocked, which is strange behavior coming from a 6-foot-10 center who masquerades as a power forward. Horford was being guarded by Justin Holiday, a lanky wing defender who routinely struggles with physical forwards, and couldn't do anything against him.

Here's a bit of positivity: Horford and Embiid played together during a solid Sixers run in the third quarter, and though they played together more than most fans would probably like, if he continues to shoot jumpers well in Orlando, those lineups will keep on coming.

• I don't envy Raul Neto having to come into this game and play a huge role when everyone (Neto included, I imagine) expected him to be buried on the bench in Orlando. But while he did have his moments in the first half, he really struggled on both ends down the stretch.

(Not sure why Alec Burks didn't get more of a shot either with the starters or one of the closing groups. He's not a defensive stopper by any means, but he was more than competent during his time on the floor, and Neto was drowning out there. Brown had a bad night that did nothing to dispel the concerns anyone would have about him coming in.)

• The overarching bad thought I have watching this game is that every long-term issue and potential playoff concern came roaring back at once. It's a game that's easy to overreact to because of that, though you're not out of line to get a little worked up about it.

The team struggled without Embiid, Milton looked unprepared, Horford was ineffective for a lot of the game, Simmons was multi-talented but shooting averse, their defensive effort was inconsistent, you get the picture. The Sixers can say whatever they want about chemistry (which admittedly seems hilarious after the sideline argument), the end product is what matters.

So far, the end product looks like the defective product we've seen all year. This game should have been a relatively easy victory — the Sixers were quite good on offense, and that should not get lost in all the complaining about this game. But they still felt like they never got out of their own way, and in many respects, that's the story of this season.

• A small version of a big problem — Philadelphia's defense was nowhere near good enough. We'll talk more about this at length, but it was a stinker.

• You already knew where we had to start for this section.

Raul Neto now out on the floor for the Sixers to open the 2nd after this exchange between Milton and Embiid. This is... not great! pic.twitter.com/VO09gQMeM4

In a vacuum, a couple of teammates getting into a heated argument is not a big deal. These guys are all hyper-competitive or they wouldn't be playing pro basketball in the first place.

That being said, not a great look for either guy involved in the dust-up. Embiid was jawing and getting a little passive-aggressive with Milton before it spilled over on the sideline, and though Milton doesn't have to sit there and take it, he's supposed to be the steady hand in control of the offense and the team. Letting this reach a blow-up point in the first quarter of the first game back is a little insane.

(We'll dive more into this once we can talk to the parties involved, but it might have started with inbounds passes, which Embiid and Milton struggled with on more than one occasion. T.J. McConnell still likes to hound guys in the backcourt, as you can imagine.)

Even aside from this, Milton had a nightmare first game of the restart, and though I think you can still be optimistic about his role in Orlando, there's a reason coaches don't love relying on young players when it matters.

• The thought, "Has Josh Richardson lost his mind?" went through my head a few times during the first quarter alone. He is not equipped to be the team's primary ballhandler. As an attacker in some side pick-and-rolls? Maybe you get some value out of that. With him bringing the ball up the floor and initiating, you're asking a lot of a guy who has proven incapable of shouldering that load. Every time they do it, things go haywire.

And look, at this point that's firmly on the shoulders of the coach. Richardson wasn't thrust into the point guard role in the first half because of the Milton-Embiid dust-up, it was an intentional lineup choice Brown went to early, and the team completely collapsed with that look. There is a mountain of evidence that Richardson doesn't cut it there, and you have a bunch of playable guards now to push him to the role he's meant to play. Use them!

• If you watched this game with a person who had never seen a basketball game before, they may have believed this was the first time Sixers players had ever attempted to throw entry passes before. They missed in every which way — passes that fell short, passes that went high, passes that were 50/50 balls for players who can't win 50/50 battles — and Philadelphia's turnover problem we thought they had kicked suddenly came roaring back.

TJ Warren going nuclear in the first half probably could have been avoided by just taking care of the basketball. With Indiana's streaky scorer cooking, the Sixers were getting the ball back in his hands quicker and quicker as the first half rolled on, and at that point it basically becomes a shooting drill. Turns out the guy who has made a living as a bucket getter welcomes that sort of opportunity.

It's simply not acceptable in any way. After looking cohesive in the tune-up games, albeit with Embiid only playing one half in those three games