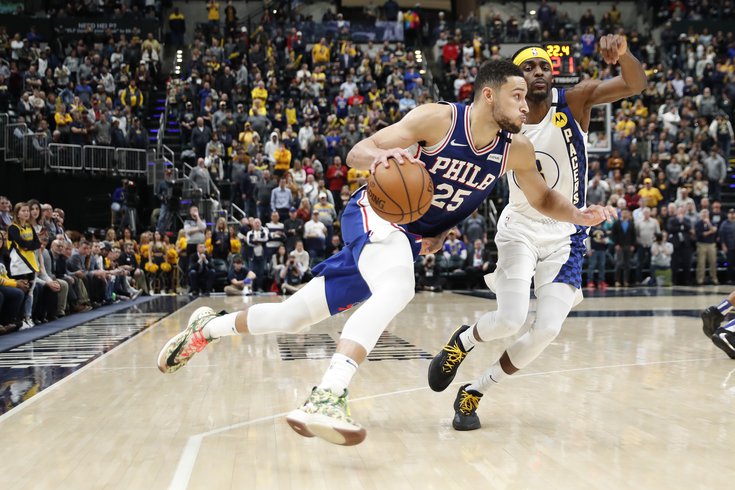 Ben Simmons and the Sixers will face the Indiana Pacers in their first game of the Orlando restart.

The NBA is back, the Sixers are (mostly) healthy, and their quest to win a title begins again on Saturday. With so much chaos and disorder in our everyday lives, the right to be aggravated by the Sixers again is to be valued.

Over the course of three scrimmages, the Sixers showed you everything they might be in Orlando. The starters have poured it on, the bench players have coughed up massive leads, and we even had our first Joel Embiid health scare of the restart. It's like we never had the pandemic in the first place.

In honor of the season kicking back off on Saturday evening, I went back through the tape, stared into the crystal ball, and spotlighted a few things we can keep an eye on in each of the eight games the Sixers will play before the playoffs begin. Tomorrow, we'll serve up a bunch of Sixers-related predictions, which I imagine will be proven hilariously wrong by the time this is all wrapped up. So it goes.

Yes, we saw the Milton-Richardson-Harris-Simmons-Embiid lineup debut last Friday, when they rolled in limited reps vs. the Memphis Grizzlies. The surprise factor has worn off a little bit. That doesn't make their official debut any less interesting or any less important to the long-term success of the Sixers.

Does that sound a bit dramatic for one game in an unprecedented restart played in Disney World? Probably. But even if Shake Milton isn't the long-term answer in the starting lineup, his presence threatens to give them proof of concept for a title-winning formula. Since Ben Simmons and Joel Embiid started playing together, they have always had a deficit of players around them who can shoot and dribble. While they may still lack a No. 1 perimeter option, they are at least surrounded by a sensible supporting cast.

Indiana, it's worth noting, will be at less than full strength. Domantas Sabonis had to leave the bubble to receive treatment for plantar fasciitis, leaving them a big man short in a battle against Joel Embiid. Victor Oladipo is back in the mix after initial doubt that he would play in the restart, but he'll be at less than full sharpness.

Still, it's a team that will give you a professional test with toughness and scoring at several positions. Time to break in the new group.

The Spurs have not been very good this season, and they're probably going to be even worse in the bubble. LaMarcus Aldridge won't be there, backup forward Trey Lyles won't be there, and so they're going to end up low on bodies and talent in the frontcourt when the games start up.

While that bodes well for Ben Simmons in this individual game, it's also an opportunity for Philadelphia to really lean into him as an attacker off-the-roll as prep for different playoff looks. The NBA has turned into a small-ball league generally, but even more so in the playoffs, where funky multi-guard lineups and wings playing power forward are now staples. Being able to attack that lineup style is critical for Simmons, who can avoid the invisible performances of playoffs past by offering utility as a screener.

We've seen him pick up the screen-and-roll game already during the Orlando scrimmages, building on a partnership with Josh Richardson we saw in spurts this season:

Not everyone is going to make it as easy as Danillo Gallinari does here. But the blueprint is there, and there won't be a better game for heavy Simmons rolling reps than this one.

Okay, sorry, there's just no meat on this bone. Is Ish Smith the best player on Washington's restart roster? That's an earnest question.

Whether the Sixers decide to full-on sit guys for this game or just try to blow them out early so they can coast through the second half, some form of rest feels inevitable.

I maintain that one of the great disappointments of the altered season is losing Philadelphia's only home game against the Orlando Magic this season. It would have been the first time Sixers fans had a chance to react to the former No. 1 overall pick in person since his departure, and pretty much every possible reaction was on the table. Okay, one exception: I don't think the Vikings parody "FULTZ! FULTZ! FULTZ" chants are ever happening again.

That experience is still on hold, but a date with Fultz and the Magic is still compelling. For one, the Sixers have had their struggles against Orlando when they're playing in the state of Florida, even though there are no real weaknesses for them in that matchup. They have acclimated to the boring Orlando environment and should be ready to get a win over a much less talented team. Famous last words, I know.

There are only two real outcomes for this game: Markelle Fultz has a big game and we relitigate his selection and career again, or Shake Milton wildly outplays him and is anointed the guy Fultz was supposed to be. No in-between.

When's the last time you thought about Philadelphia's guard defense problem? I would guess it has been a while, and not just because of the pandemic. With Ben Simmons rising to an All-Defense level, Josh Richardson playing rugged defense against smaller players, and Matisse Thybulle causing havoc off the bench, the Sixers have had the right blend of top-end talent and consistency they've lacked in the past. With Embiid having a down year by his standards, they've needed it.

That doesn't mean they're out of the woods by any means. While it seems unlikely they'll stay locked in with the sixth seed (Sabonis' injury is a real killer for Indiana), they do have to prepare for the possibility that they draw Boston in round one. Kemba Walker is a threat to pop off on any given night, and with Simmons likely to take the Jayson Tatum assignment, that leaves checking Walker to somebody else.

Portland, of course, doesn't have a Tatum-like wing or anyone even close. But their dynamic duo in the backcourt must be reckoned with, and Lillard can stretch teams out with his off-the-dribble shooting as well as anyone not named Steph Curry. Philadelphia's lone matchup with Portland this season was a wild one — Joel Embiid missed it due to a suspension, the Sixers found themselves down 21 points in the third quarter, and they stole a victory with a Furkan Korkmaz buzzer-beater. And underneath all of that, Lillard poured in a smooth 33 points on just 16 shots, torching Philly every which way.

Something worth watching: the "rearview contest" has long been a point of emphasis for Brown-coached teams, though the combination of fighting over screens and dropping the big has proved problematic at times. Guards like Lillard (and by extension, Walker) can hurt you badly with just a small attacking window, especially when their bigs are setting high screens like so:

Then there's the ability to hunt switches with multiple perimeter threats, which plagued Philadelphia in their 2018 second-round defeat against Boston. Weaker defenders, like the aforementioned Korkmaz, are especially vulnerable against teams built around multiple high-level initiators. This game ends up being a good litmus test on defense in multiple ways.

If everything goes smoothly for the Sixers and the league at large, this is the front-end of the only back-to-back they will play in Orlando. For everyone's sake — viewers at home but especially the health and safety of the guys in the bubble — let's hope that remains true. In any case, it's pretty likely Embiid will sit for one of these games. Selfishly, I hope it's this one. There's nothing to really learn from the matchup, and a tune-up against Toronto would be a good pre-playoff test for Embiid and the rest of the team.

That said, more games with Milton at the helm without Embiid could prove useful. Four-out basketball built around Simmons becomes an all-game thing, increased pick-and-rolls are on the menu, tempo is increased, and Horford gets to take advantage of his short-roll passing in a way that's tough when Embiid is playing 30+ minutes a night.

Assuming both teams take it seriously and are healthy, this is the game on Philadelphia's restart schedule. Al Horford is only guy who has vexed Embiid as much as Gasol has over the last few years, and this has the makings of a final tune-up before a potential meeting with Toronto down the road.

The biggest indictment of Embiid in matchups with Gasol is not that he struggles to score, it's that he struggles to get shots up in the first place. Embiid's 0/11 performance in Toronto in late November was perhaps the worst game he has ever played as a professional, and though he managed to avoid another goose egg in the following meeting at home, he managed just seven shot attempts in a five-point win.

These are the two sides of an average Embiid attempt to attack Gasol. The Spaniard is too disciplined to bite on Embiid's jabs and fakes, and too big/strong for Embiid to go through when he tries to back him down. Embiid ends up shooting mostly low-value shots as a result:

Though Embiid doesn't navigate double-teams particularly well, Toronto's ability to defend him without sending constant help strains Philadelphia's offense. When Jimmy Butler left, the ability to release a post-up to an elite perimeter creator went with him. The Sixers are forced to choose between Embiid trying to solve a puzzle he has yet to crack, or turning the offense over to any number of flawed options alongside him.

There are exceptions, but most NBA champions have had to overcome a veteran foe who gave them fits in order to reach the summit. Forget what round the Sixers get to this season for a second — Embiid finding a way to beat the Gasols of the world will signal his readiness to go win a title.

August 14th, Houston: Embiid vs. Russell Westbrook... if anyone plays

For my money, it's the best rivalry in the league between two players who basically never have to match up with one another. Embiid's loud, goofy persona is a natural counter to Westbrook's scowling, intense demeanor, and is a rivalry in its purest form. This didn't happen because of any franchise history or manufactured media wars. These guys simply don't like one another, and it shows.

With both guys stuck in opposite conferences, we only ever get two of these a year at most. And that is a real shame because some of the best highlights we've ever seen from Embiid have come in games against the UCLA product.

Westbrook, it's fair to note, has a huge upper hand in the win column for this rivalry. The Harden-Westbrook combination poses a different, even more lethal punch than Lillard-McCollum, and the Sixers had a rough time dealing with it when they met in Houston earlier this season.

Will this game be taken seriously by either team? Hard to say. An authentic homecourt advantage is out the window for these playoffs, so any effort during this regular-season finale is about staying sharp and potentially jockeying for seeding. It would be a shame if either team treats it as if there's nothing to play for, because we could all use another chapter in this goofy basketball beef.