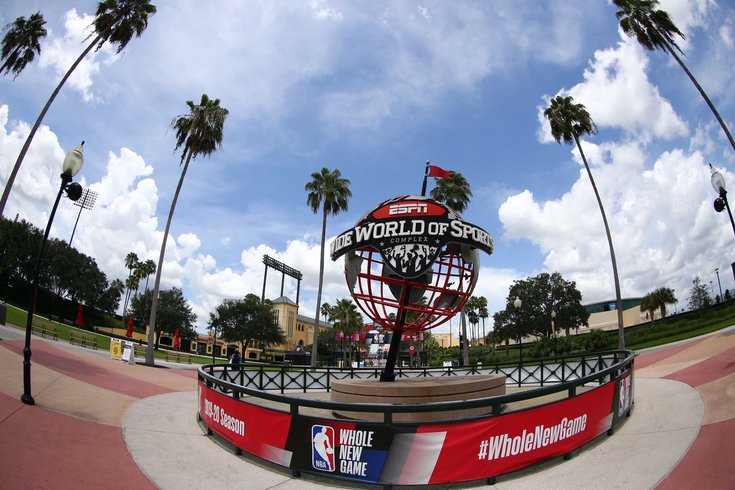 The NBA's restart will reach the eight-game playoff seeding stage this week.

The Sixers emerged from their third Orlando scrimmage mostly unscathed, a more important fact than the final score of their 118-115 loss to the Dallas Mavericks on Tuesday. Joel Embiid had the night off, Ben Simmons sat down after halftime, but it didn't matter much because Tobias Harris had himself an evening.

I am in disbelief that overtime was played, but here's what I saw.

• Harris was one of the guys responsible for Philadelphia's terrible start on Tuesday night, but to his credit, he was also a huge part of digging them out of that hole.

It started with a stretch in the second quarter where Harris used a corner three as a springboard to eight straight points, changing the tenor of the game for Philly. That jolt of confidence seemed to light a fire in not just Harris, but the rest of the team. They started getting their hands on loose balls, pressing a bit more on defense, and following Harris' lead on the glass, where he created extra possessions through effort alone.

The game just looked easy for him in the third quarter. Harris was bodying guys in the post, scoring over Kristaps Porzingis with touch, even weaponizing the extra attention his way to find open teammates. It was, with no hyperbole, some of the most complete basketball we've seen from him in a Sixers uniform (and it's certainly fair to note the setting).

One of the knocks against Harris as a go-to guy is that his mentality doesn't always match his ability. He can get lost in the shuffle a little bit in Philly's attempts to space the floor around Embiid and Simmons, his value coming down to knocking down catch-and-shoot threes.

Games like these, even though they're scrimmages, should be a reminder to he and his teammates that he can get on a roll if you give him enough runway to do so.

• Al Horford was well on his way to having another stinker when he, like Harris, stepped up and changed the tenor of the game. The Sixers have been talking a big game about their spirit and competitiveness in training camp, and Horford helped lend more credence to those ideas by taking the second half of a meaningless scrimmage seriously. His final line was still a bit ugly, but they don't mount a comeback without him.

Athletically, I do think Horford looks closer to his old self than he did for most of the year. There were times where he was able to beat Kristaps Porzingis to spots on the floor and prevent drives before they happened, a big change from the guy we saw in the middle of this season.

His shooting touch will make all the difference. As the backup center, shooting well is somewhat of a bonus. But in the minutes he's playing next to Embiid, outside touch is essential. He's off to a good start there in Orlando.

On the negative side: it seems a little late in the game to be giving Horford excuses for blatant, sometimes comical mental errors. Not being able to protect the rim like Embiid is not his fault, especially when he's mistakenly asked to fulfill the same duties and play in the same scheme as a much different (and better) player. But there are too many instances still where his mind and body are on completely separate pages.

In a smaller role than was expected, I think he has plenty to offer in Orlando.

• Alec Burks is a guy I viewed as a wild card entering the Orlando restart, someone you might not play one night and then bring in for instant offense the next game. But I think he has shown enough to deserve real consideration for the playoff rotation, and at the very least deserves looks in the "regular season" games to come.

With little time to get acclimated after coming over from the Warriors at the trade deadline, Burks has looked a lot more relaxed within the offense in Orlando. Upon his arrival, it seemed there was no shot he would turn down, perhaps because he was out to make an impression, but he has shown much more of an interest in playing setup man lately.

At the very least, his patience has been better, so his aesthetic is a little better than "conscience-free gunner." He dominated the garbage time minutes while looking at home with the regulars, which is exactly what you want to see.

• Simmons had himself a clunker on Tuesday night, and the best part of his performance was parking his butt on the bench for the second half. The first two scrimmages in Orlando were virtuoso performances for Simmons, so he gets a bit of a pass for not dialing it up for the third one.

• On Sunday, Josh Richardson's ability to plug in holes took center stage. Tuesday, you saw the other side of the Richardson coin, and how his lack of an elite offensive skill can get him into trouble.

Richardson has the opposite problem Harris has, in that he sometimes carries himself with a level of confidence that outstrips his skill set. His handle takes him to places he shouldn't be and struggles to get him out, his shot has been MIA, and he's at his best when he's asked to make quick and simple reads.

He's a tone-setter for this team, no doubt. Perhaps that's why they looked so awful early on Tuesday, because he couldn't get anything going.

• Matisse Thybulle has looked good after a long layoff. He looked good for long stretches of Tuesday's game, even, bringing a level of energy they needed off of the bench and adding to his Orlando highlight reel with some nasty dunks over Dallas defenders.

But man, did Luka Doncic put him in the torture chamber in the second half. A lockdown, one-on-one stopper Thybulle is not at this stage. There is every reason to believe he can get there, and in Orlando, I firmly believe he is going to be a positive. His chaotic energy screws guys up in normal circumstances. Unleashed in this unorthodox setting? Forget it.

The gambling is going to get him in trouble, though, and too much of it could get him relegated to the bench.

(Another positive before we go — I thought Thybulle showed some small flashes as a decisionmaker against Dallas. Garbage time of a scrimmage is what it is, but he had a nice drive and find of Kyle O'Quinn late in the game for an and-one layup. Something to watch and hope for as his game develops in the years to come.)

• But enough about the Sixers' offense in the first quarter, am I right folks?

Seriously, that was a ghastly display. The shooting numbers say it all, and yet they don't really do justice to how bad they were on offense. There were numerous airballs, possessions where one guy just tried to barrel through three defenders without looking for a teammate, and a lot of disgusting, useless midrange looks. This wasn't a case of Philly bricking a bunch of open threes, rather a case of grotesque offense.

Who or what was to blame? It started, apparently, with the Sixers not actually getting to warm up on the court before the game started. But that would have excused cold shooting, not the trainwreck that took place on the floor. It's a team effort to look that bad, coaching staff included.

There is a tendency when Embiid is absent to overreact one way or another — either their success without him is proof they can build around Simmons alone, or their failure an example of how they'd drown if they ever parted ways. It's not as simple as either answer, but the big man's ability to get buckets without much additional action around him is a blessing. Now if they can just form a cohesive identity between that and Simmons' run-and-gun game...

• Let us all be thankful we don't have to watch the bench Sixers in close games down the stretch.

(Thinks about the possibility for COVID-19 to screw up the rotation.)

Look, I'd just go ahead and hope the NBA's bubble is as safe as they believe it is. Nobody wants to watch more of this.)

• Playing overtime in a bubble restart scrimmage is absolutely ridiculous and I can't believe they went through with it. Free basketball that absolutely no one asked for!