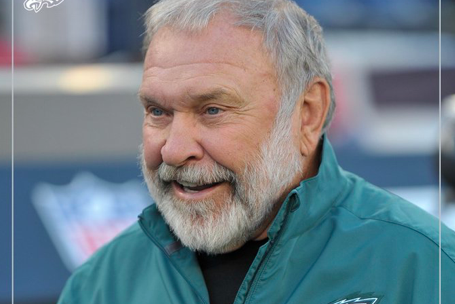 Howard Mudd coached the Eagles' offensive line during the 2011 and 2012 seasons, helping develop perennial starters Jason Kelce and Jason Peters. He's best known for his tenure with the Indianapolis Colts during the Peyton Manning era.

The Eagles and the NFL community are mourning the loss of longtime offensive line coach Howard Mudd, who died this week after suffering serious injuries in a motorcycle accident last month.

Mudd, 78, died at a Seattle hospital where he had been receiving treatment since the July 29 crash.

The Eagles released a statement on Mudd's passing on Wednesday evening.

As a player, Mudd earned three Pro Bowl selections over a eight-year career with the San Francisco 49ers and Chicago Bears in the 1960s.

Mudd coached the Eagles offensive line during the 2011 and 2012 seasons, leading a group that helped produce career highs for LeSean McCoy, who later set the franchise rushing record. He was credited with elevating the play of Jason Peters, Jason Kelce and Evan Mathis, among others.

During his time in Philadelphia, Mudd was known to ride his BMW motorcycle to the NovaCare Complex for practices.