Researchers are concerned about why these giant mammals keep washing ashore 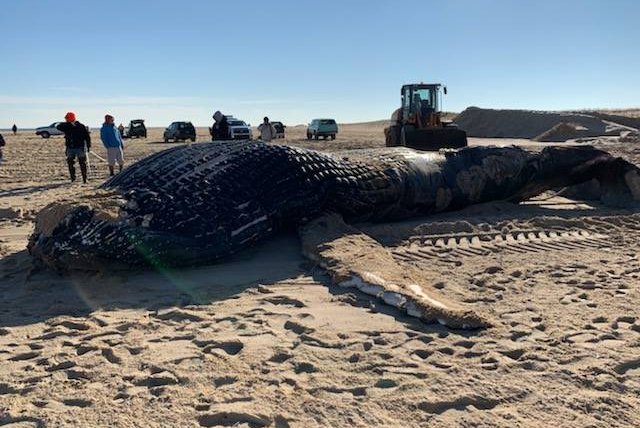 A juvenile humpback whale washed ashore at Cape Henlopen State Park on Sunday. This is the sixth humpback that washed up in two years.

For the sixth time in two years, a humpback whale as washed ashore a beach in Sussex County, Delaware.

The whale, a 36-foot-long, 40,000-pound, female juvenile humpback, was found dead on shore at Cape Henlopen State Park on Sunday after it was first spotted the day before near Cape May, New Jersey.

On Monday, a preliminary necropsy was conducted after officials hauled the giant sea mammal from the water to higher ground.

Researchers with the nonprofit Marine Education, Research, and Rehabilitation Institute in Lewes said a collision with a large ship followed by shark attacks was likely the cause of death, according to Delaware Public Media.

The National Oceanic and Atmospheric Administration has ruled the number of humpbacks washed ashore on the East Coast to be an unusual mortality event. More than 80 have been reported between 2016 and Sept. 30, 2018.

According to the NOAA, seven humpback mortalities alone have been reported since 2016 in New Jersey.

And the highest rate on the East Coast is in New York. So far in 2018, eight whales have washed ashore there. In total the state has seen 17.

Humpbacks are protected under the Endangered Species Act, as four of the 14 population segments are still endangered and one is listed as threatened. The biggest threats to the whales are vessel strikes, entanglement in traps, habitat impacts, and ocean noise.