Off of North Carolina, the Frying Pan Ocean Cam is back online livestreaming its American flag as it did during Hurricane Florence in 2018 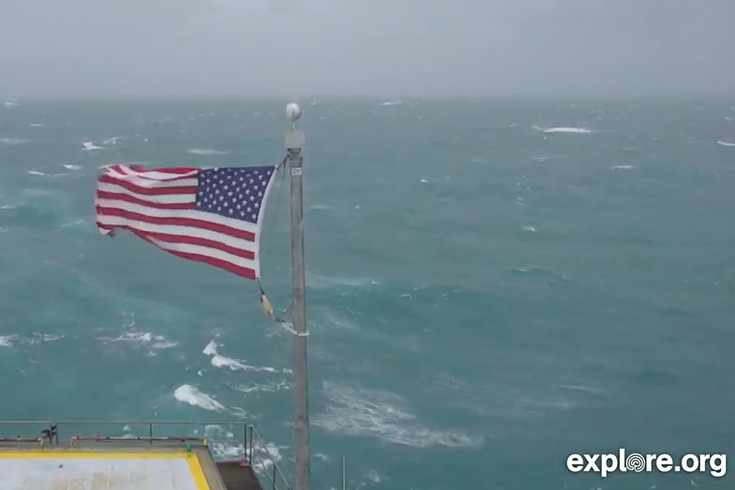 Hurricane Dorian brought dangerous winds and rain to Florida on Wednesday after it pummeled the Bahamas as a Category 5 hurricane for days, leaving at least 20 dead and the islands without fresh water, food or medical care.

On Thursday, live cameras continue to track the hurricane conditions along the coasts of North Carolina and South Carolina. Experts with the National Hurricane Center say that as of 10 a.m., the storm's core was about 70 miles southeast of Charleston, South Carolina, with winds up to 115 mph.

Heavy rain, wind, and even tornadoes spun off the coast of the Carolinas late Wednesday. Flooding in Charleston is already about 3-5 feet deep, according to video posted on social media. Officials are saying flooding could reach up to eight feet in some areas.

Along with coastal storm surge, areas along and inland from the coast are forecast to see as much as 10-15 inches of rain. Flash flooding in low-lying areas and along rivers and streams is highly likely. Be prepared to move to higher ground if floodwaters start to rise. #Dorian pic.twitter.com/m9cZ9rOEZa

Thousands in the Carolinas and Georgia remain without power, although officials are working to restore it.

NWS said Dorian will be impacting central North Carolina through Friday afternoon. Below are livestreams from cameras at various points along the Carolina coast. As the storm gets closer and worsens, there is no guarantee how long these live feeds will remain on line.

Among the locations streaming video is the Frying Pan Ocean Cam mounted atop Frying Pan Tower, a former light station in the Atlantic Ocean run by the U.S. Coast Guard from the 1960s until 2004. It is positioned more than 30 miles off of North Carolina's Outer Banks.

During Hurricane Florence in September 2013, thousands of people watched the live broadcast from Frying Pan Tower the showed its American flag whipping in 105 mph winds. The flag – which online viewers named Kevin – ultimately was shredded and tattered by the severe conditions. And after the storm passed, it was donated to the American Red Cross, which auctioned it off for $10,900 to help with the Hurricane Florence relief efforts.

As Hurricane Dorian continues north, it is expected to move further offshore and have minimal impact on the Philadelphia region. The National Weather Service says it will be windy in Philadelphia with a chance of rain after 7 a.m. on Friday. Winds will be from the northeast at 10-18 mph, with gusts as high as 30 mph. There is also a chance of rain Friday night. Friday's high temperature will be 72 degrees with a low around 58.

Saturday will be mostly sunny with a high near 79 degrees

At the Jersey Shore in Atlantic City, the NWS forecast says rain is more likely beginning after 8 a.m. on Friday. Wind speeds will be between 22-26 mph with gusts up to 43 mph. Followed by more rain on Friday night. The high will be about 73 degrees and the low will be 62.

Saturday will be mostly sunny with a high near 75 degrees.