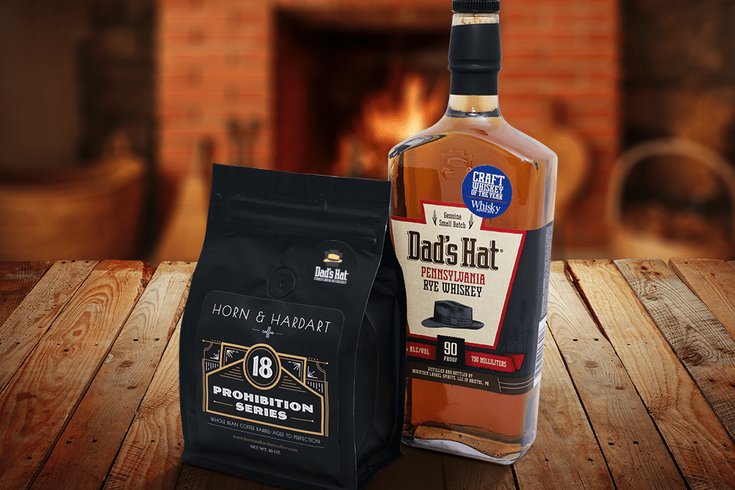 Horn & Hardart's new whiskey barrel-infused coffee isn't actually alcoholic, but the new product is still aimed at coffee lovers who will enjoy a hint of whiskey in their morning brew.

Heads up, Philly. You can buy whiskey-infused coffee beans from an iconic brand founded in the city some 130 years ago.

Horn & Hardart, the company whose name is synonymous with the once-wildly popular Automat restaurants in Philadelphia and New York City, said on Wednesday that it introduced a new line of coffee infused with distilled craft spirits.

It should be noted here that the limited-release beans will not produce an alcoholic cup of coffee. It'll just give your brew an aroma, if you will, of Dad's Hat Pennsylvania Rye Whiskey.

The new line was cleverly named the #18 Prohibition Series, after the 18th Amendment, the company said on Wednesday. The whiskey blend costs $24 for each 10-ounce bag.

H&H President Al Mazzone detailed how the product came about in a statement, saying that Dad's Hat had given the company a recently drained oak whiskey barrel.

From there, H&H used a blend of 75 percent Liberty Roast beans and 25 percent espresso beans and aged it in the airtight barrel for 21 days, he said.

"We literally babysat this product, rotating the barrel twice daily. What evolved was a coffee with notes of rich dark chocolate, cherry and berry and a hint of whiskey,” he said. “The challenge was to take high quality whiskey and coffee and combine them in a way that complemented and did not damage either one.

"The process involved a long round of testing to find the right amount of aging to make the perfect coffee."

The company used roasted beans because they absorb the flavor faster than green beans, Mazzone said.

"Coffee drinkers will love the refined taste, with subtle aromas and textures," he said. "There’s nothing quite like it on the market.”

The second product in the line, which will integrate New Jersey distillery Cooper River's Petty's Island Rum, will debut around Christmas.

Founded in 1888 by Philly native Joe Horn and Frank Hardart, the company's Automat was a forerunner to fast food restaurants, using coin-operated glass and chrome vending machines to dispense food and beverages. The last Automat closed in Manhattan in 1991.

The Mazzone family first tried to bring back the brand in the 1990s, selling a range of old H&H recipes through supermarkets.

In recent years, the family began acquiring the rights to the Horn & Hardart name and recipes and focused on selling the company's famous coffee online. Its products, including the new line, can be bought here.