If Philly caves on 'sanctuary city' status, the extortionists win

Jim Kenney advocates for "sanctuary city" policies during a rally at LOVE Park in July 2015.

Within hours of being sworn in as mayor, Jim Kenney signed a handful of executive orders. (Hey, that sounds familiar!)

The one that got the most attention – and continues to be a hot-button issue more than a year later – involved Philadelphia’s “sanctuary city” status.

Specifically, Kenney made good on a promise to reinstate full sanctuary status by refusing to automatically detain undocumented immigrants facing nonviolent crimes – aka “ICE holds” – like federal authorities would prefer. Kenney's predecessor, Michael Nutter, had rolled back the city's stance on sanctuary on his way out of office.

Sure, the Nutter administration said the issue was more nuanced than that, that his rollback had nothing to do with ICE holds, only that information would be shared with authorities about whether someone they’re seeking is in Philly.

That nuance disappeared as soon as Kenney signed that executive order, though, and the issue took on greater importance in the months since Donald Trump was elected president.

Trump’s threats to cut funding to cities with sanctuary status took the form of – yep – an executive order signed with the first two weeks of his administration. That could be bolstered by the state senate which is considering its own bill to slash funding to sanctuary cities like Philadelphia.

Translation: Cash-starved Philly could lose even more cash if it doesn’t back down.

Before we go any further, a quick primer:

“History has shown us that sacrificing one group does not ensure that the rest are spared. All it does is place them all in greater danger.” – Lauren Hitt

Sanctuary-city defenders claim the policy helps police maintain decent working relationships in communities where undocumented people live – i.e. they’ll come forward with information because they don’t fear deportation. Its detractors argue that the status invites bad people to do bad things in American communities, and that no community should position itself above the law of the land.

With the sides having dug deeply in their respective trenches, compromise feels like a pipe dream.

Late last week, though, City Council President Darrell Clarke offered up a quote that I read as his assertion that addressing a potential loss of federal funding is more important than sticking to principle.

“While I believe in individuals' rights regardless of their citizenry, the simple reality is we cannot lose federal and state funding,” he reportedly said after Thursday’s City Council meeting, before whining about not being consulted on the policy.

Then, taking a page from Trump’s blame-the-media playbook, he tweeted that people should “read past the misleading headlines” and linked to a 480-word Facebook post. (He or a staffer with access to his account actually Tweeted the link not one, not two, not three, but four times within 10 minutes, but who’s counting?)

“I am not ‘at odds’ with Philadelphia's sanctuary city status but I also cannot ignore my fiduciary obligations to taxpayers,” he (or a staffer) claimed in a word salad. “It would be the height of irresponsibility to not do everything we can as a city to protect taxpayers and all of our most vulnerable residents – not just certain groups – from his Administration.”

You can read the whole post via this link. 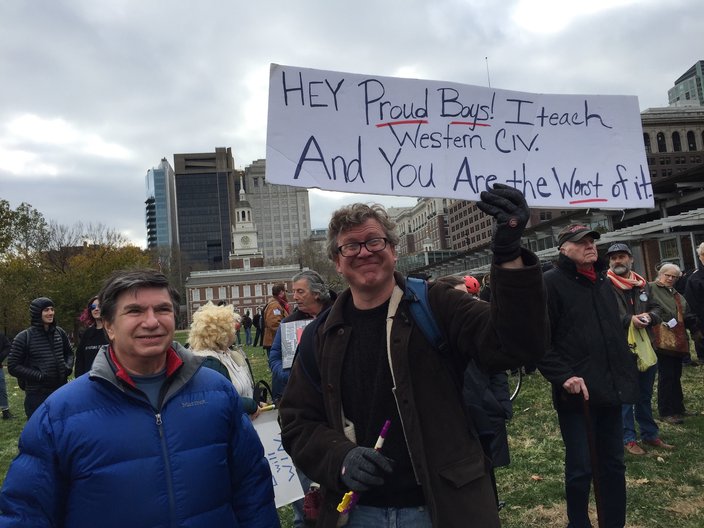 Some may say that’s all about semantics, that Clarke’s A-OK with the policy itself, just not with the ramifications of that policy could soon become.

I’ll respond that that’s damage-control nonsense at a time when it’s easy to cast the media as the villain. If not for that status, there would be no funding threat; ergo, Clarke is at odds with it in its entirety.

I don’t like that my city could lose a bunch of cash because of a policy that a bully of a president doesn’t like any more than Clarke does.

But I also don’t like suckling a bully’s teet to get a belly rub at the expense of some of my city’s most vulnerable residents – whether they're here legally or not – as Clarke has.

To hear Kenney spokeswoman Lauren Hitt tell it, Clarke “has never once raised these issues with the Mayor."

If Clarke had done so face-to-face instead of mouth-to-microphone, “we would have discussed his concerns and offered information proving them invalid,” Hitt said.

She went on to explain that the “reasonable compromise” Clarke broached was done away with by Trump.

And that Clarke’s fellow city councilmembers have supported the policy to the point where she doesn’t think the majority shares Clarke’s views.

“Where we do agree is that we must do all we can to protect all Philadelphians. Over the past two weeks, we've seen federal actions that threaten the rights and well-being of one group after another, and we're fighting against those just as we will challenge those to come,” she said. “History has shown us that sacrificing one group does not ensure that the rest are spared. All it does is place them all in greater danger.”

I feel the same way, but let me explain why in blunter terms.

There is a reason why negotiating with terrorists or kidnappers is frowned upon. And that reason is once they get you to give one thing, they’ll ask for more and more and more until you’re a shell of what you once were.

When you cave in to that type of person, you cede all power. They will proceed to walk all over you at every turn because they don’t – and, quite frankly, shouldn’t – respect a pushover like you.

In this case, external forces saying they’ll take money away from Philadelphia are no better than run-of-the-mill grifters blackmailing their target.

They don’t like the policy, so they threaten to take away unrelated funds to force their victim into a corner from which they can’t emerge.

When we have an elected official – in a powerful position, no less – publicly indicating that they’d be willing to bend, that puts the other side squarely on the path to victory. They’d be foolish not to keep pushing, having already successfully pulled off half of the divide-and-conquer strategy.

What Clarke (or whomever handles his online messaging) ought to do is fire off another social-media screed, and what it ought to say is this:

Philadelphia will not be bullied.

Philadelphia will continue to stand up for its vulnerable populations regardless of how misleading the presentation of what sanctuary cities actually are.

And, Philadelphia doesn’t negotiate with terrorists or back down from challenges just because would-be extortionists seem to have the upper hand.

Sometimes, it's not easy to do the right thing. This is one of those times.

If Clarke keeps it up, he's placing all Philadelphia residents at greater danger of succumbing to the next whim of Trump of Republicans in Harrisburg.