Nobody will ever wear No. 23 for the Imhotep Panthers again 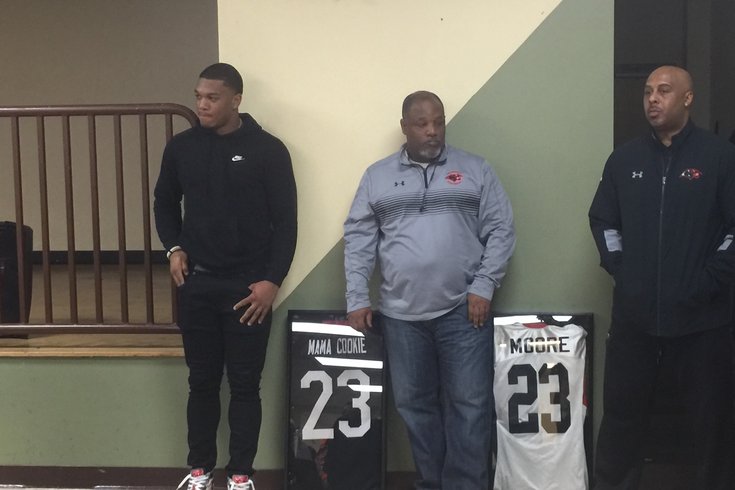 On Monday, February 18, 2019, the Imhotep Institute Charter High Panthers football program retired the number of former player D.J. Moore, who now plays for the Carolina Panthers in the NFL. His mother Donna 'Mama Cookie' Ridley was also inducted into the school's Hall of Fame.

When the Imhotep Institute Charter High Panthers football team gathered for its year-end banquet at the East Germantown school on Monday, collecting silver medals for a season that ended in a state championship-game loss was an afterthought.

Sure, in 2015, the program became the first-ever city Public League team to win a state football title, a momentous victory which stands alone among the Panthers’ five appearances (2013 and 2015-2018) at Hersheypark Stadium.

Still, a bit of history was made at Monday’s gathering.

There, the program honored alum D.J. Moore, a standout star who made such a name for himself at Imhotep and then the University of Maryland that the Carolina Panthers selected him in the first round of the 2018 NFL draft.

While he wears No. 12 in the pros, he sported No. 23 at Imhotep, a number that no player shall wear again as Imhotep retired it at an event where Moore and his mother (and staunch program supporter) Donna “Mama Cookie” Ridley were inducted into the school’s Hall of Fame.

It was the first time in the 20-year-old school’s history that that honor was bestowed upon a football player, and Moore – who is already making a name for himself in the NFL – humbly accepted it with his mother at his side.

“This means a lot to me,” he said as the players were collecting the same silver medals that he once collected as the program burst on the scene statewide. “Seeing this brings back a lot of memories for me. This is a really special moment.”

Andre Noble, the school’s athletic director and boys basketball coach, said that the jersey they’d framed wasn’t of a ceremonial nature. It was the same one that Moore wore in his last game for the Panthers. Nobody has worn No. 23 in the years since, but Monday’s ceremony just formalized that “retirement.”

Deborah Toney-Moore, known around the school as “Mama Debbie” whose son Shaka has gone on to play for the Penn State Nittany Lions – marshaled the plan to have a former player and parent inducted into the school’s Hall of Fame for the first time ever.

She said Ridley was honored on the occasion of her retirement, and her plans to move to the Carolinas to be closer to her son. Even after Moore graduated, “Mama Cookie” supported the program by cheering, collecting tickets at the door and helping with concessions, all while working a full-time job with SEPTA.

“She’s a great mom to D.J. and to all of our players,” Toney-Moore said. “These are two high-quality people who’ve been, and will continue to be, a part of our lives.” 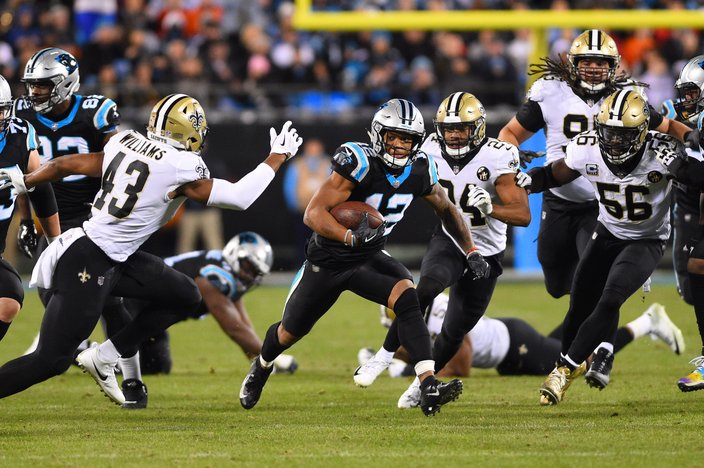 Kevin Norris, an assistant coach with the program, recalled the first time he saw D.J. Moore; the future star was a 2-year-old kid running around as the Mt. Airy Bantams youth program was practicing.

“Everybody knew early on that D.J. was something special,” he said, noting that Imhotep was a great fit for the player since the highly regarded Albie Crosby was head coach at the time. “D.J. is a special young man to me. He holds a special place in my heart. Before all’s said and done, his jersey at Carolina will be retired, too.”

To be sure, Eagles fans would probably appreciate it if Moore sported their team’s jersey. In fact, Imhotep had planned to retired it when the Panthers were in town to face the Birds in October, but his schedule didn’t permit. (Moore had three catches for 29 yards in Carolina’s 21-17 comeback victory.)

Asked if he gets any pushback for playing for another team, Moore just laughed.

“Oh, no,” he said, realizing that those who know him couldn’t be happier with what he’s accomplished in life. "Nobody ever brings me any heat about that."