Christina's mother didn't want her to play with the high school boys, so she'll play with women pros 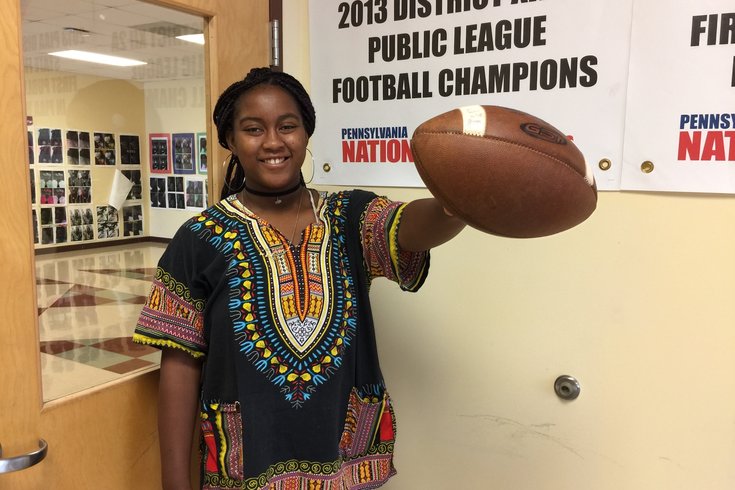 Christina Ingram, a 16-year-old junior at Imhotep Institute Charter High School, is an “A's and B's” student who participates in the drum line and on the chess team.

She also loves football, and not just because Imhotep's boys team became the first-ever Philadelphia public-league squad to win a state title two Decembers ago.

Christina loves the game so much she wanted to play and finally, seven years after the sport took her heart, that’s exactly what she did.

She participated in the Imhotep Panthers’ off-season training drills this spring and summer as part of the linebacker corps. She was part of the team, and she couldn’t be happier … or more impressive.

“She didn’t have any quit in her,” said Damon Linder, who coaches that position for Imhotep. “There was no ‘It’s a girl’ thing. Teammates respected her because she came in and took care of business.

This tale out of the East Germantown section of Philadelphia isn’t your run-of-the-mill “girl plays football with the boys” story, though. And there were no parents here refusing to let her play out of concern for potential head (and other) injuries.

After some cold-shoulder moments between daughter and mom, they happily reached a compromise. But before we get to that, let’s rewind to the beginning.

Christina fell in love with football as a 9-year-old watching her brother Terrence on the gridiron, she explained during an interview at the school on Tuesday morning.

She harbored those feelings until this summer when – despite her mother’s objections – she joined the Panthers.

“She really didn’t want her baby girl to play football...I would leave her notes every day, things like, ‘I love you, mom. Please let me play football!’ ” – Christina Ingram

Christina said her teammates, after some early eye rolls, accepted her. Her mom wasn’t very keen on the size differential.

“She really didn’t want her baby girl to play football,” said Christina, who has four brothers. “Me and my father had to convince her. I would leave her notes every day, things like, ‘I love you, mom. Please let me play football!’”

Vivian agreed with that assessment.

“When she was practicing with the boys, I thought it was too dangerous. They were hitting hard on the practice field,” she said. “I told her that opponents will have no mercy on her just because she’s a female. But I can see how much she just loves the sport, jumping up and down and screaming when she’s watching it at home.”

What Christina likes most about it is the camaraderie. She just likes working as part of a team toward a common goal.

In track and field – she participates in shot put, discus and sprints – she doesn’t get that same feeling.

“People call me ‘the little bully’ because I’m always fighting with the boys here,” she said. “I can’t let the boys walk all over me. (Practices) were tough, but when we had one-on-ones, I would put some of them on their ass.”

Still, Vivian had reservations. Coaches said she was good enough to play on Imhotep’s junior-varsity squad, and they based that solely on size disparity.

Christina has aspirations to not only attend North Carolina A&T State University but play professional football. While she ultimately didn't play on the boys team this fall, Christina got a huge surprise when she arrived home for dinner one day last month.

"There was something in her eyes that said, ‘Give her a shot.'" – Star Wright, head coach and founder of the Philadelphia Phantomz

“It was pouring rain. I’d hardly spoken to her for a month because I really wanted to play football,” she said, noting that her mother had prepared nachos – one of her favorites – for dinner that night. “’I asked her, ‘Mom, why the special dinner tonight?’ She said she knows I’m mad at her and that one day, I’ll realize she was doing me a favor.”

That’s when she noticed a piece of paper on the dinner table. It was a flyer advertising tryouts for the Philadelphia Phantomz, a local football team that plays in the Women’s Football Alliance.

“I ran outside in the rain, jumping up and down, yelling ‘I’m gonna play for the Phantomz,” she recalled.

Well, not so fast. First, she had to make the team.

Star Wright is the head coach and founder of a Phantomz team that, next spring, will start its third season.

The squad had been an adult-only squad, but then Christina went to tryouts.

“I wasn’t a big fan of bringing a 16-year-old onto the team that’s been 18-plus. I didn’t want to change the culture,” Wright explained. “But after talking to her mom and her, I realized I couldn’t pass this up.

“There was something in her eyes that said, ‘Give her a shot,’ and she did great in the tryouts.”

When the Phantomz meet for their first practice of the season at Marcus Foster Memorial Stadium near Simon Gratz High School this Saturday and Sunday, the teenager will join her adult teammates.

There, they will prepare for a preseason that starts in March and a regular season that kicks off in April.

According to Diedre Silva, the league’s director of communications, Christina will likely be the youngest player in the WFA when the season starts. (The Kansas City Titans had a 16-year-old quarterback last year, and she was unsure whether any of the teams will feature younger players on their rosters in 2018.)

“It’s less and less of an anomaly, though,” Silva said. “In fact, I’m reading a Facebook message from the mother of a middle-schooler right now who wants to play. … (Christina) is on the front end of a growing trend.”

On Tuesday, Vivian recalled the joy that Christina’s reaction brought her, and shared her daughter's anticipation of what's to come.

“I had to find her a football team because she loved it so much. When I told her, she cried. That’s her heart. That’s her dream. I want to push her toward it," Vivian said. “Wherever she goes, I’ll be right beside her.

"Wow, my daughter’s playing football! I’m so excited for her!" she added. "I’m a praying mother, so I know God will take care of her.”