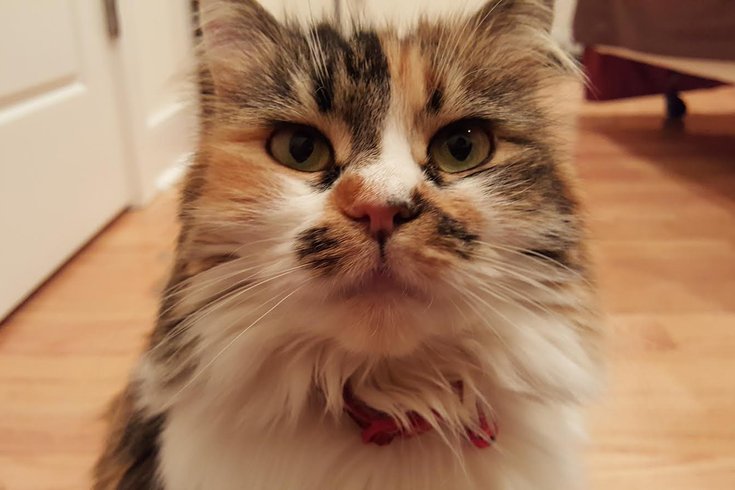 If there's a defining characteristic of a cat, it's the coat: the spectrum of colors, patterns and fur lengths that catch your eye when passing one on the street or ogling at one lounging on a window sill.

But, getting into the nitty-gritty, what decides those sometimes unusual coats in the first place?

Curious, we reached out to Margret Casal, associate professor of medical genetics for the University of Pennsylvania School of Veterinary Medicine, for an answer.

What determines a cat's coat coloring? I know it's a complicated subject, but perhaps speak to the cats people probably think of -- an American Shorthair, for example.

It's a lot of things. There's a gene responsible for the coloring and there are variants thereof. A cat [could be] agouti, which is when you look at [a cat who has characteristics where] each single hair shaft has at least two colors on it. So the hair shaft itself is striped, giving it that interesting color. And then variants of that same gene will make a tabby cat, or a mackerel tabby or a striped tabby, all the different patterns. It's just different variants of a gene.

Yeah, somewhat. They are a little bit different -- different from dogs, too.

You said 'agouti'? What does that mean?

In genetics, it just means each single hair shaft has different colors. One hair shaft will have at least two colors on it and striped, so it has a grizzled appearance -- alternating between dark and light bands. But an agouti is actually a long burrowing rodent related to the guinea pig in South America -- so, probably because the hair of that agouti animal looks the same.

How about coat pattern? What determines that? That's way different from human hair.

Interestingly, it's the same gene and just a different variation. And depending on influence from other genes, the stripes will be different. For example, a cat -- a completely black cat, even -- is often a tabby underneath. And you can see that when the light falls into the fur just right. So when kittens are born, black kittens -- often you'll see they are tabby. It's actually more rare to have a solid black cat that is truly solid black and does not have the tabby gene.

Do cats with patterns have patterns on their skin, too? You sometimes get that surprise when you shave a cat.

Not so much. Usually, with brindle dogs you see that. If you shave a brindle dog you'll see the pattern. But with cats, not so much.

How about fur length? Short hairs can't grow out to be fluffy if they want to.

So, taking color into consideration, if I have two cats who are black will they make a black cat?

If you have truly solid black cats, and they're not carrying other genes, all the offspring will be black. But if you have two black cats that are carriers of something else, white spots or something, part of your offsprings will have white spots on them and some will be solid black. It depends on how the genes come together.

So there's no easy way to know?

No, but there are a few things that are well-known. There are calico cats, or tortoiseshells -- a cat with orange and black at the same time, plus maybe white but we'll forget about that for now. In those, if the orange color sits on the X chromosome and that particular variant -- we'll call it orange and non-orange if you have a female -- then she has two X chromosomes, and she can be orange on one chromosome and black on the other. And by nature, this is the one case where, in females, they have to have two Xs but one is turned off. And it's random which one is turned off -- in every single cell. What you'll get is a cat that in a couple cells expresses the orange gene and in others the black -- or non-orange -- gene, a variant of that same gene on the other X chromosome. That's why you get the patchy appearance of orange and black spots.

Yes, because they're -- I wouldn't call it "defective," but they are either "XXY," in which the Y makes them a male but two Xs allows them to express orange and non-orange, or they can be "mosaics" -- where some cells will have "XX" and some will have "XY," and that's another chromosomal defect so they can also express those colors.

You bring up a very good point. Because Siamese, people think of the Siamese breed of cat but it's also a color. It's quite an interesting color because it's one gene regulated by temperature. The Siamese color comes about when they have a gene called the "CS gene," and that one is wherever body parts are colder, the hair tends to be darker. Ear tips, feet, tail -- where the body temperature is a little lower than normal, it's going to be darker hair. In this case, Siamese is truly a color and not just a breed. You can have domestic shorthairs that look Siamese in color.

Any sense of most common color?

Brown or black tabby is most common. But it depends on where you are. It matters where groups of cats live. Certain colors will be more common than others. Overall, the tabby will be most common, as that's probably where the original cats came from.