Infrequently Asked Questions: Why are beer bottles brown or green? 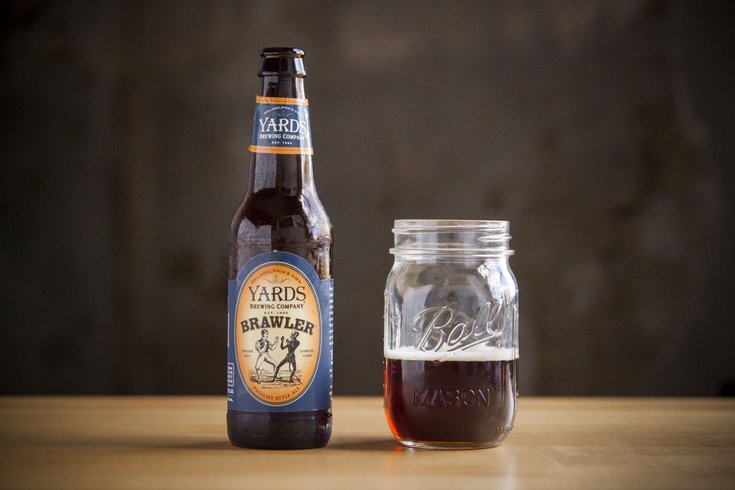 Yards Brawler in a brown bottle.

Given the careful chemistry involved with creating beers and wines, it should come as no surprise there's a scientific explanation. We reached out to Yards Brewing Company Director of Quality Assurance Frank Winslow for answers.

Why are beer bottles mostly brown or green, and not clear?

Well, the main reason to have a darker-colored glass is beer itself is light-reactive. There are compounds on the hops which interact with UV light, and the UV light can change the shape of the molecule and convert it into something which is essentially the same aromatic compound as the secretion a skunk releases. It smells almost identical. Clearly, that’s not something that’s a positive addition to a beer, so people use a darker beer bottle to absorb light and minimize pickup from the UV effect.

The idea's that it would spoil?

Yes. You see it a little bit with the green glass, a very subtle [instance of] what’s called a ‘skunking effect’ in green glass bottles. Most often on imported, often German beers. But a lot of imported beers -- often times those are lagers and they don’t have a ton of hop character in them. But there’s a subtle skunking to it …

[Europeans are] making these crystal-clear, very pretty, light gold beers and they sort of want to show off what those beers are like. And the way to showcase those beers without exposing it to the light [is the green].

So the brown bottle is preferable, then?

If you’re worried about the skunking effect, the brown bottle is superior. It’s not perfect. But it’s much better, and there are far fewer problems. And at one point we’ve even used blue bottles here at Yards; blue falls on that spectrum, closer to brown than green, but it also has to do with the thickness of the glass itself and not just the color.

Is the ideal glass thicker?

The ideal glass for blocking light would be thicker, but when you're trying to sell and transport a product all over the country or world, thinner is lighter and, therefore, easier to manage. So there’s a lot of tradeoffs there you have to worry about. And it’s interesting to point out that skunking is an effect everyone is paranoid about in beer, but skunking is light-struck -- that’s what causes that flavor. 'Light-struck' is the description people in the beer industry use. But most people, when they talk about skunking, are more concerned with beer heating up and going down and those two things actually don’t really cross over. Certainly, [the] temperature will affect [the] freshness of your beer and speed up staling reactions. But it’s not going to cause the formation of the [skunking] compound.

Is this all particular to hops? Some beers do have clear bottles – a Corona, for example. Why is that OK?

The light-reactive molecule comes from the hop, but you don’t need to use that part of the hop to get bitterness or some of the other flavors expected in beers. So, it’s perfectly reasonable that if you really wanted to show off your light-gold beer and let everyone see how refreshing it looks, you could put it in a clear glass bottle and only use extracts of the hop for the bitterness, or specific oils that would have aroma flavors you need. You need to be careful that whatever fraction of that extract you’re using, that it would not have pulled part of this chemical with it.

But that’s why Corona and High Life and some other clear bottles out there, they're either using – I can’t say for sure, but I would almost guarantee they’re using hop extract of some variety, or maybe not using very much hops at all.

Where do cans fit into all this? Are they better to use?

If light-struck is what you’re concerned about – if you have light getting into your can, you have a problem. [Laughs] Aluminum would be preferable for this flavor. Because once that can is sealed appropriately, there’s no way for light to get in.

What does Yards mostly use?

We use the brown bottles. Again, they’re preferable. And they’re easier to source than a lot of other products may be. Just because it’s a common one, too.