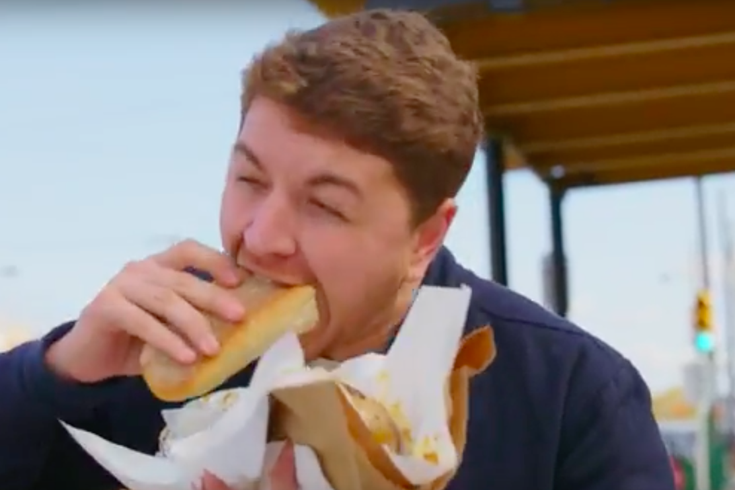 Alex Delaney of Bon Appétit bites into a cheesesteak. It is one of 16 he ate at least part of in half a day, for some godforsaken reason.

A man has called into question his overall mental state by eating 16 Philadelphia cheesesteaks in the span of time usually required to digest just one.

Alex Delany, a web editor for the food site Bon Appétit, broadcast his blatant attempt at self-harm in a video published to YouTube on Wednesday. Delaney starts his artery-clogging misadventure where one might expect — Pat's, and then Geno's across the street. He continues on a tour of the city's more touristy locations — Tony Luke's, Campo's — and some less famous but hardly hidden spots — John's Roast Pork, Gooey Looies.

Scenes of Delaney with his father and driver, as well as his vague assessments of the city's eateries and neighborhoods, imply Delaney is a Philly native (which he is). He nicknames each steak, some of which border on outlandish (the "Bed, Bath and Beyond" steak at Woodrow's on South Street), but sometimes nailing it on the head (the "3 a.m. steak" at Sonny's in Old City; I've never had one sober or before midnight.)

It's unclear if Delaney actually finishes all 16 cheesesteaks; in fact, there's a tacit admission that he didn't, as after eating at D’Alessandro’s around 9:30 p.m., he concluded by celebrating going to "16 Philly cheesesteak spots in 12 hours." In other words, not necessarily eating 16 full cheesesteaks, which is likely why Delaney is able to half-jokingly say he's feeling "pretty terrible" and not be in the fetal position as bread and meat soaked in melted cheese shred through his stomach in an attempt to exit every orifice of his body.

In a tweet promoting his video, Delaney wrote: "Not sure why I agreed to this in the first place, but I did it for you." The "you" in that statement is presumably Bon Appétit's audience, although he may be referring to the giant cheesesteak god that once battled Ben Franklin for control of the city. If such a god were to require a sacrifice, it might look something like this.

You can watch Delaney's video below.