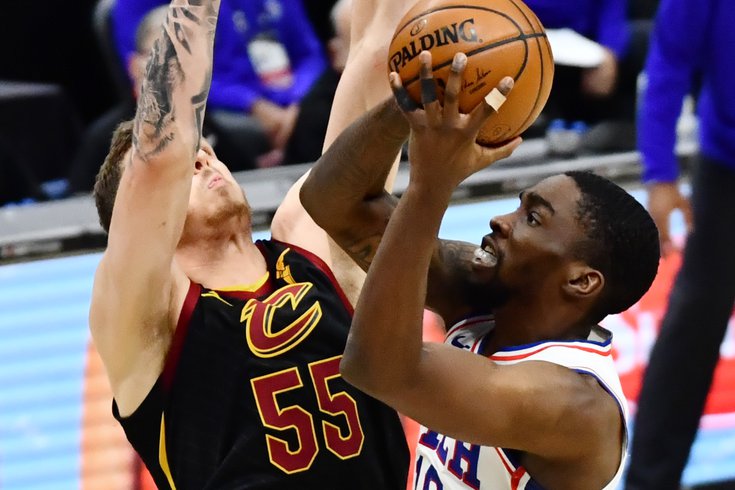 Shake Milton had a breakout game in Cleveland Thursday.

The Sixers rode hot shooting from Shake Milton and an inspired performance from most of the second unit to a 114-94 win over the Cavs on the road. Philadelphia's win allowed them to end their extended road trip with a 4-2 record, something they can feel proud of with Joel Embiid on the shelf.

• Two guys got going from deep on Thursday who the Sixers desperately need to get rolling for the playoffs. Shake Milton and Seth Curry were surprising in different ways, but they're of roughly equal importance in the short and long-term hopes for this club.

Curry's night was about the simple act of letting shots fly, an issue I've harped on all year and one that Doc Rivers has spoken up about in recent weeks. The veteran guard was gunning from the start against Cleveland, and you'll be shocked to learn that one of the best shooters in the league cashed in at an excellent rate.

What's more important is the variety of shots Curry was hitting against the Cavs — he hit threes coming off of screens and off-the-dribble, then turned the attention he was getting from deep back onto Cleveland, sucking them in to find more space or a teammate for a better shot. He's certainly not the movement shooter master like JJ Redick was here, and it would be silly to try to use him that way in an Embiid-centric offense anyway. But if they can sprinkle in some more designed plays to get Curry free and encourage him to shoot, they can almost certainly push him to greater heights.

But nobody had a bigger night for Philadelphia than Milton, who is finding himself as Doc Rivers reintroduces more ballhandling in the lineup. Tyrese Maxey has carved out a small role with the bench recently, and the rookie has allowed Milton to play a bit more off-the-ball, a boon for his catch-and-shoot opportunities in the corners. Even Furkan Korkmaz has assumed more playmaking responsibilities, with the Turkish wing finding Milton for one of several made threes on the night for Milton.

It shows you how much a simple change in alignment and strategy can make for a player, and there are plenty of other benefits to getting Milton going with shots off-the-catch. Milton showed you that himself on Thursday night, building on his success from three for a team-leading night at the office.

A night like this lends hope that the George Hill addition can be as impactful as the Sixers have claimed it will be in public. With Hill taking some initiation and playmaking responsibility out of Milton's hands, the younger guard can focus most, if not all of his energy on shooting and scoring.

• Some of the credit for Milton's success, minds you, belongs to Dwight Howard, who did a masterful job of creating space for Milton with screens and seal offs in the pick-and-roll. But this game was about so much more for Howard, who played a huge role as the Sixers seized the lead and the game for good in the second half.

With Cleveland playing a relatively small lineup for most of the night, Howard's brand of aggressive, glass-attacking basketball had a platform to shine from. His offensive rebounding prowess is brought up a lot and rightfully so, but even then, I feel like we don't give it the proper credit it deserves for tilting games. Howard draws foul after foul when he hauls in boards, and though he is admittedly not the greatest free-throw shooter in the world, there are benefits from that reaching far beyond his success at the line — when Embiid is in the lineup and returns from the bench after a Howard stint, he's often only a single drawn foul away from the start of a free-throw parade.

This was a tale of two halves on the defensive end of the floor, and really, it was a tale of two units that could be told through Howard's contributions. The starting group downsized on Thursday night, a reasonable enough decision from Doc Rivers, and that went poorly for the Sixers early, with Mike Scott being Mike Scott and sloppy rotations on the menu everywhere else.

Through the backups, the Sixers turned the screws on the Cavs. Howard was terrific as a help defender and rim protector, and save for the odd goaltend here and there, he was on point as the leader on the back end. It's not often you can say that the all-bench group carried the team, but they basically did that on Thursday night, with Milton and Howard the two luminaries at the center of that run.

• Maxey attempted not one, but two different end-of-quarter heaves to try to earn his team a few extra points on the scoreboard. In a league where chickening out to protect your field goal percentage is the rule, not the exception, it was nice to see. How sad is that?

On a serious note, Maxey has given the Sixers some pretty good minutes as a combo guard recently, his struggles shooting and finishing aside. The Sixers play with greater tempo with Maxey on the floor, even in a halfcourt setting, and that live-wire ability Maxey has can help liven things up for a group that needs it.

• I can't tell you how it feels to watch these games as fans, or coaches, or members of the front office, but from my seat the Ben Simmons offensive experience is absolutely maddening. Outside of the stretch where he played legitimately inspiring basketball to seal his All-Star berth, his season has been marred by absolutely bizarre decision-making. There are times when he plays with the mindset of a guy not used to being in his own body.

There is no scenario where Ben Simmons has Matthew Dellavedova on his back in the post that should end with Dellavedova in the same place and Simmons attempting a hook shot over him. I don't care if it sounds like a caveman mentality, the size difference between the two should allow Simmons to absolutely bury Delly through the first row of seats (at least if they were there) for an easy layup or dunk. And that wasn't even the worst possession vs. Delly of the second quarter — Simmons would eventually brick a fadeaway jumper from the free-throw line instead of attempting to use the physical advantage he has on his Australian colleague.

Cleveland, of all teams, has somehow given Simmons fits all year. They forced him into a seven-turnover game in Philadelphia, won a blowout in the first meeting between the teams this year, and somehow managed to fluster him yet again on Thursday night, with Simmons cutting drives off before they really got started, forcing himself into tougher shots than were necessary against a fairly small Cavs team.

The Cavs were playing the likes of Kevin Love and Dean Wade as their biggest guys on the floor for a lot of this game. The Sixers opened the floor up by moving Dwight Howard back to the bench and putting Mike Scott out there, absorbing the defensive hit that comes with it. Hell, the midrange brick came on a possession where he couldn't have asked for a friendlier floor spacing lineup: Scott-Simmons-Green-Curry-Milton. He turned in another brutal performance on offense anyway.

The lineup excuses are not cutting it, and neither is his offensive output. Unless they're hiding an injury, don't know what else to say about this.

• I think there have been moments this season where Milton has shown signs of legitimate improvement on defense, most of those moments coming in one-on-one situations. Unfortunately, he is still a poor decisionmaker as a team defender, and that's arguably more important/impactful in today's NBA.

One ugly moment stuck out in particular: with the Cavs in transition during a possession at the end of the first quarter, Milton decided to abandon Love in the corner to sprint at a ballhandler who already had a Sixers player in front of him. Abandoning Love one pass away in the corner is a bad idea broadly speaking, and it's even dumber when Love is in the midst of a heater.

• I don't know if I've ever seen someone shoot terrible shots more confidently than Matisse Thybulle. There are possessions where he jogs back with the shot in the air as if he expects it to go down, only for it to careen off of the backboard or miss the basket entirely.