What they're saying: Sixers were smart and savvy at the trade deadline 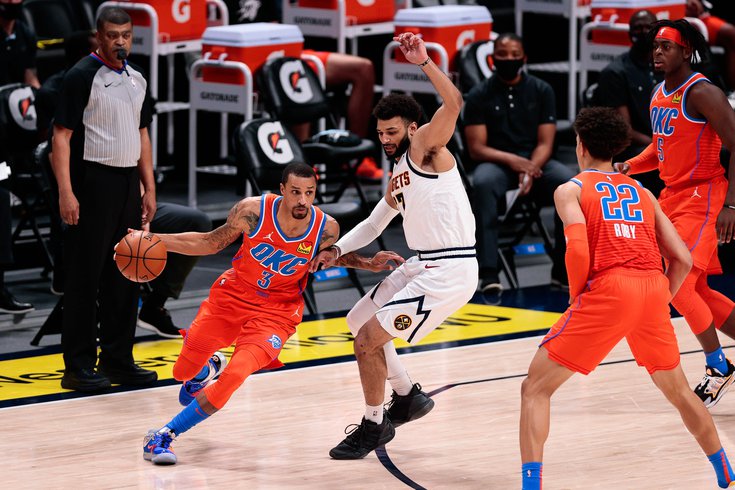 How are the so called experts grading the Sixers trade for George Hill?

There really seem to be two schools of thought regarding the Sixers' decision to make a modest addition, but not break the bank and pull off a blockbuster move, ahead of Thursday's NBA Trade Deadline.

Some are a bit frustrated, seeing the Sixers still atop the Eastern Conference standings with MVP caliber Joel Embiid nearing his return and so much opportunity for a championship, with the playing field seemingly even across the NBA landscape. And others are pleased that the Sixers maintained their ability to make moves in the future, potentially extending their title window a little longer with flexibility available to Daryl Morey to improve next year.

But the marks received by the Sixers after what was a busy but not earth-shattering deadline day have to be encouraging for fans who are desperate for Philadelphia to finally make it further than the second round of the playoffs.

Here's a look around the basketball world at what they're saying about the Sixers right now:

Philly got more than just a passing grade from the Worldwide Leader for adding George Hill and giving up only some second round picks and two players who typically are deep on the bench. The Sixers, as Pelton explains, are in a good spot as they added minimal salary and are in a position of strength — able to extend Hill for 2021-22 at a reasonable rate or cut him loose thanks to a very friendly contract. He also happens to be a perfect fit for a Sixers' second unit in need of a shot in the arm.

At 6-foot-4 with a 6-foot-9 wingspan, Hill will fit in defensively with Philadelphia, checking either guard spot and maybe even some small forwards. I'd expect him to come off the bench and help stabilize a second unit that's lacking in terms of playmaking, but Hill could also finish games in place of either Seth Curry or Danny Green depending on whether the 76ers need more shooting or more defense from those spots.  [ESPN]

One of the biggest reasons for the high marks the Sixers are getting is what they were able to hang on to. They still have their 2021 first-round pick, and they still have Danny Green — who was named in rumors as a player who was told to be "prepared to be traded." Here's more from B/R:

Not getting Kyle Lowry is a disappointment for a team that has to compete with the Brooklyn Nets and Milwaukee Bucks for the top seed in the East, but Philly should be thankful no one else got the six-time All-Star, either.

Settling for George Hill has its perks as well. The 76ers didn't have to trade Danny Green to match salaries for a player like Lowry and turned three rarely used backups into an important rotation piece in Hill instead.  [Bleacher Report]

Over at CBS, they ranked the 17 deals that went down on deadline day, and the Sixers' trade to acquire Hill ranked right in the middle at No. 8 — where they called the veteran guard a "Consolation Prize," with the team walking away at 3 p.m. Thursday without Lowry. Here's a snippet from their rankings:

He's not the half-court playmaker the Sixers needed to improve their offensive efficiency, but he's a 44 percent 3-point shooter over his last two seasons and he was a key member of the Bucks' recent playoff runs. Meanwhile, OKC adds to its hoard of future draft picks and the Knicks pick up a young athlete in Ferguson who could compete for wing minutes. Ultimately the trade inches the 76ers slightly closer to the Nets in the East, but likely not as far as they'd hoped.  [CBS]

It's clear Hill, who has a career scoring average just north of 11 points per game, won't swing the NBA championship odds to Philly's favor. But it seems pretty obvious, when you look at some of the accolades and experiences Hill has had in the NBA, that perhaps Daryl Morey added him in large part for what he can do for the team off the court.

We’ll learn more in the coming days about how Hill mixes with the Sixers’ culture. He’s been part of organizations with strong reputations like the Spurs and Bucks and has done impressive, important things off the court. Hill last season was one of five players who won the NBA’s Community Cares Assist Award, being recognized for his social justice and COVID-19 relief work.

His decision not to play in Game 5 of Milwaukee’s first-round series against the Magic after the shooting of Jacob Blake by police in Kenosha, Wisconsin, led to the Bucks’ boycott, with other teams in multiple sports following suit. The playoffs ultimately resumed after the NBA and NBPA made commitments related to social justice and racial equality, including the formation of a social justice coalition. Sixers head coach Doc Rivers is part of that coalition.  [NBCSP]

Many advocates for what the Sixers did (or did not do) Thursday cite the fact that adding Lowry — who would have cost the Sixers potentially Tyrese Maxey, Matisse Thybulle, Danny Green and maybe others — would have crippled a bench that is already lacking in depth. They also would mention that Lowry's impending free agency could have made him a rental, which is not what the Sixers are looking for.

But there is another reason the Sixers' decision not to go star hunting was a smart one. While Lowry is a dynamic All-Star point guard who has won an NBA title and has a ton of playoff experience, sending a king's ransom for him probably still would not have put Philly over the top in a loaded Eastern Conference.

While Lowry definitely would have given the Sixers a better shot this season, it’s far from certain that he would have done so in a manner material enough to alter the postseason calculus. This is especially true when you consider the fact that acquiring him would have required the Sixers to part with at least one of their wing defenders and potentially both. Any improvement they achieved on the defensive end in Lowry would have been at least partially offset by the loss of Danny Green and perhaps Matisse Thybulle. In other words, we’d still be asking the big question we’re asking now: do the Sixers really have enough to contend with a trio of teams that have spent much of the last year tailoring their team to beat a team like the Sixers are.

With the addition of Victor Oladipo to Kendrick Nunn and Goran Dragic, the Heat have a trio of the type of playmaking guards that have long given the Sixers trouble. They’re also expected to add Spurs big man LaMarcus Aldridge, whose ability from three-point range could allow Miami to draw Joel Embiid away from the basket. The Nets were quiet at the deadline, but James Harden, Kyrie Irving, and Kevin Durant need no introduction. And the Bucks clearly have the potential to give the Sixers problems. If not Lowry, a player like Hill was a necessity, as much for his ability to match up against some of these guards as his ballhandling ability. The fact that he can shoot means he can potentially work into a lineup with Simmons and Embiid. Morey sounded confident that the Sixers would be able to add a big man on the buyout market. It would help if that big man could play away from the basket.  [Inquirer.com]

Ultimately, if the Sixers can win a championship it will be because of the players they have right now. They have needs everywhere, but they were able to avoid addressing those needs at the cost of creating bigger holes elsewhere. Which is why, as The Athletic's Sixers crew lays out, Philly will need to show it can play in the playoffs like they are doing right now in the regular season:

Heading into the trade deadline, the Sixers arguably had needs up and down the positional spectrum. A steady ballhandler and 3-point shooter was one of them, a role Hill fills. The Sixers also could’ve used a defensive-minded wing, which they didn’t acquire. The final area that stuck out was a stretch big man.

Realistically, the Sixers weren’t going to fill all those positions via trade. And by keeping Thybulle and Green to pair with the ultimate defensive chess piece in Simmons, the need for another wing becomes less pronounced. With the addition of Hill, the Sixers are going to enter the playoffs as a team that will need its elite regular-season defense to transfer over.  [The Athletic]