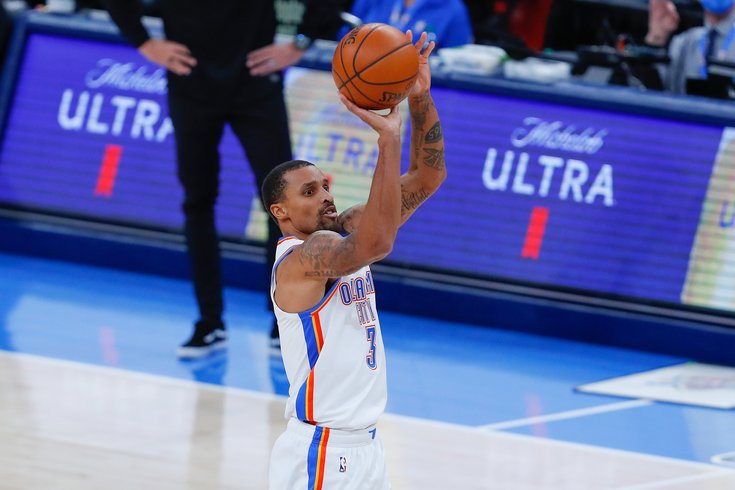 The Sixers added a shooter in George Hill Thursday.

The Sixers are trading for Oklahoma City Thunder guard George Hill, a team source confirmed to PhillyVoice on Thursday. Hill comes to Philly as part of a three-way deal between the Sixers, Thunder, and Knicks.

The full details are as follows:

Hill, who has missed time this season due to an injury to the thumb on his shooting hand, is a man who has been moved around to various contenders over the last half-decade. After a spell with the last of the LeBron-era Cavs teams, Hill played a season and a half for the Milwaukee Bucks prior to being moved in the Jrue Holiday trade last offseason.

For the current Sixers, Hill is as clean a fit on paper as you're going to find because he's the sort of guy who all playoff teams want. He's a solid defender, solid initiator, terrific catch-and-shoot player, there's basically nothing to dislike about him aside from his age (Hill will turn 35 before the playoffs start).

The logic on Philadelphia's end, according to sources, was relatively straightforward. They are trying to assemble as many two-way players as they possibly can ahead of this year's playoff run. Viewing Hill as a near-elite floor spacer at a minimum, and a credible option against opposing guards who can hold up on switches, Philadelphia thinks Hill upgrades their chances to win this season in a significant way.

The ability to keep Danny Green while adding another two-way contributor played a part in Philadelphia's thinking. That doesn't rule Green out of trade talks should the right offer for a needle mover materialize, but it was part of Philly's calculus when acquiring Hill.

In the midst of a terrific year before going down, there will be some questions about whether Hill returns to form while dealing with the aftermath of an injury on his shooting hand. But for the cost — no premium picks and your third center as the best player in the deal — it's a fair price for a guy who immediately boosts your second unit.

There's even better news for Philly on the contract front. Hill also has another year on his deal that is only partially guaranteed, which gives you flexibility in both directions. If he stinks it up and you don't want to be on the hook for the full $10 million and change next year, you have an out. If he fits in well with your group, you have him on a manageable salary next season, and that cap number could also be useful to match money in a bigger trade next year if they need him for those purposes.

Several prominent reports have suggested this takes the Sixers out of the Kyle Lowry sweepstakes. There is a layer of truth to that — a source with knowledge of trade talks told PhillyVoice on Thursday afternoon that the current asking price reached a point that didn't make sense for Philadelphia, and they turned their attention to other options (Hill included) as a result.

But I would not count the Sixers out there yet. By retaining Mike Scott in the Hill deal, his contract along with Green's leaves them with a reasonable financial path to matching money in a Lowry swap. The Sixers are expected to continue working the phones up until the close of the deadline, and while they are now on the outskirts of Lowry talks, they remain interested in Lowry should the Raptors come down on the asking price, one source said.