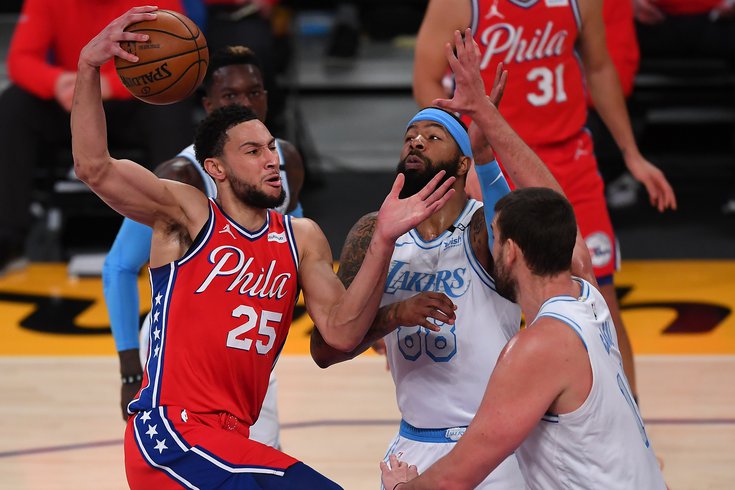 Philadelphia 76ers guard Ben Simmons drives to the basket against the Lakers.

The Sixers avoided catastrophe in L.A. on Thursday night, holding off the Lakers for a 109-101 victory in one of the weirdest wins of the year.

• What exactly did Danny Green do during his All-Star break? He's only a couple years older than I am, and I would like to find out whatever he did to rejuvenate himself so I can potentially apply it to my own life.

Everybody looks good when their shots are going down, and I'm not expecting Green to be scorching hot from three the rest of the year. But you can see why the front office and coaching staff have reaffirmed Green's importance at every opportunity this season, treasuring his feel for the game and willingness to let it fly even when the closeout is bearing down on him.

We may look back on the deadline when the playoffs roll around and think they were fortunate to keep him around. He has saved two games for the Sixers basically by himself over the last week, and it may not be the last time he's forced to do so before the season ends.

• I thought Ben Simmons was poor as an attacker for the vast majority of this game and has not been at his best since returning from the All-Star break. This game also seems to be a good example of how much he can control a basketball game even when that is the case, because there were stretches of this game where he took over without even considering a jump shot.

Down almost all of their big men (especially after Dwight Howard got ejected from the game to close the first quarter), the Sixers tinkered with a variety of small-ball lineups throughout the night. Simmons made those groups go by putting his talents on full display all over the floor. He was jumping into passing lanes to create fast breaks, devastating as a short-roll passer, and Danny Green's one-man shot creation machine, punishing the Lakers for putting a foot wrong on any defensive rotation or transition opportunity.

(Simmons as the roll man may have been the most consequential thing we saw from the smaller looks, because it's something they can go back to frequently later on.

In the second half of this game, we saw something resembling the small-ball lineup the Sixers should be trying to put around Simmons if they want to go that route, using a Simmons-Harris-Thybulle-Green-Curry lineup that can shoot, switch, and fly in transition. They were absolutely devastating on the defensive end of the floor, which has been the biggest hurdle for those lineups working around Simmons, and they got run out after run out as a result.

I don't know if Doc Rivers will ever go back to a group like that — this time felt like he was forced into it — but I'd much rather see a group like that on the floor if they're trying to downsize. Leaning into speed and flexibility is the name of that game, and Simmons made sure they took advantage of it on Thursday.

• This was the first game of the year I came in thinking, "Paul Reed might have a legitimate impact on this game," and give the young man credit — he looked right at home on an NBA floor, using activity and athleticism to make his case for a role as the Sixers move forward a bit shorthanded.

For a young guy, there's something to be said for Reed just knowing who he is and how he needs to earn his keep. Reed ran the floor hard in transition, made himself an available target on the roll, and otherwise got in position to let it rip from deep. He created a second chance opportunity for the Sixers early in the second quarter, and his pursuit of an offensive rebound ultimately led to a Furkan Korkmaz three.

Having talent and tools doesn't really matter if they aren't accompanied by a measurable work ethic. Reed looks like he's on the right track, and I'd like to see him get more of a shot in the short-term. They might have a player here.

(One note on why I think you have nothing to lose playing Reed over, say, Mike Scott: Montrezl Harrell tried basically the same exact move in the paint against Reed and Scott within a short stretch in the fourth quarter. Reed was able to force Harrell into a really tough shot, while Harrell had no problem going right through Scott. It's not like Scott is shooting the ball well to justify his inclusion through offense, either.)

• It probably shouldn't have taken me this long to get around to Seth Curry, but his return from injury could not have gone much better. He wasn't of much help on the defensive end, but we got an aggressive offensive showing from Curry, a rare sight this season and something they hope they'll see more often.

Curry's reluctance from three is one of the screwier side plots of the season — he's as good as it gets from deep but passes up a fair amount of open-ish shots anyway. Not only did Curry take the open ones against L.A., he was feeling himself a little bit, taking deep catch-and-shoot threes and reaching into the bag for some smooth stepback jumpers that hit nothing but net.

More of that version of Curry, please.

• As far as Tobias Harris games go, this wasn't his loudest performance, but that wasn't because he checked out or did anything out of character. It was the Lakers who had the most say there — Harris was double-teamed frequently throughout Thursday's game, and the help came in different situations to boot. With the ball in the mid-post or on the wing, Harris faced a second defender over and over again.

It was a game of good decision-making from Philadelphia's third banana. When the pressure came, Harris got rid of the ball. When they left him in single coverage, Harris went to work, taking advantage of some favorable size matchups thanks to a game that trended small all night. By the time it was over, it was another game with Harris' fingerprints all over the box score and the end result.

These games mean as much, if not more than the dominant scoring outings. Harris morphing into a fill-in-the-blanks guy with Embiid on the shelf has been great to see.

• Matisse Thybulle's jump shots are just complete chaos. One game, he looks like a reliable shooter who can be a three-and-D weapon for the Sixers for a long time. Other nights, he looks like he has only just learned how to shoot a basketball earlier that week, with shots bricking in every direction from every angle.

This was one of the latter nights. Thankfully, the defense was great.

• The fourth quarter was, to put it lightly, not good. Once Mike Scott checked back into the game for Philly, things got decidedly more sloppy on both ends, with far too many possessions ending in threes from the vet forward that missed by a lot. It wasn't much prettier on defense, with the Sixers letting go of the rope after a great third quarter out of their small-ball look.

Frankly, my brain is not prepared for in-depth criticism in a win after a long day. But I'm filing this one away for later should I need it.

• We looked to be on our way to a truly hilarious night of Dwight Howard and Montrezl Harrell theatrics. After Howard blocked the hell out of Harrell on a play late in the first quarter, the two began jawing and tussling on both ends of the floor, adding a bit of spice to what was otherwise a boring-ish game by Sixers-Lakers standards.

Party was over by the time the first quarter ended. And while I agree with the assessment that it should have been matching ejections based on how it went down, the overwhelming sentiment of Howard being a victim or the call being soft misses the point — it was a completely avoidable ejection that Howard brought onto himself. He went out of his way to walk in front of Harrell instead of going back to his bench, and he got burned for tempting the refs to give them an excuse.

Did I think it was funny? Of course. Have I done the exact same thing or something similar playing sports? Absolutely. But he had already gotten into Harrell's head and could have benefitted from just letting his opponent unravel. Don't tempt fate.

• That being said, Kane Fitzgerald sure wanted to make this game about himself, which I never appreciate in a referee.

• On consecutive possessions/attempts, Scott took wide-open threes that went off of the backboard and did not hit the rim. I believe at least one of those made contact under the rim, which is extremely difficult to do even if you're trying to do it. I can't remember seeing that happen on back-to-back shots before, and I have seen quite a few bad shooters suit up for this franchise.