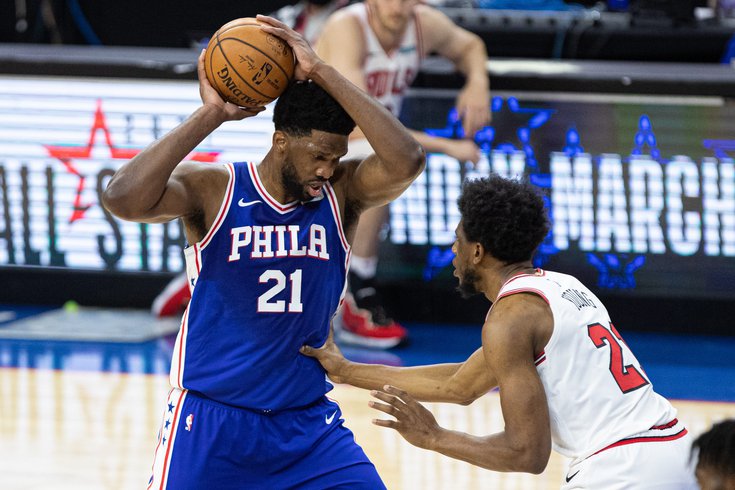 Joel Embiid put the Sixers in his backpack and carried them to victory on Friday night, putting up his first 50-point game in a 112-105 victory over the Chicago Bulls.

• I give kudos to Bulls big man Wendell Carter Jr. for not showing any fear in his matchup with Joel Embiid. WCJ matched Embiid shot for shot in the earlygoing, carrying Chicago's offense by himself with a lot of nice work from midrange.

Unfortunately for the Bulls' young big man, that ensured Embiid was engaged from the very beginning. Embiid seemed to take those makes personally, and he absolutely punished Carter Jr. on the other end of the floor, forcing him into early foul trouble with deep catches in the post and an emphasis on initiating contact. Embiid would score 14 points in a shorter shift than he normally has to open the game.

The hits just kept coming. Embiid picked up where he left off in the second quarter, pushing the Sixers back into the lead in grand style, punctuating it with this ridiculous Euro step and the foul:

There are so few guys in the history of the league who have been able to do everything this guy can on both ends. Embiid is regularly able to pull these sort of moves off at full speed, and while you worry about a guy with his health history careening into traffic without a plan sometimes, it is remarkable how elegant and graceful he is for a man his size.

Then he comes in with power, and you suddenly remember that he is a big man after all. This was one of the more dominant nights Embiid had on the glass in a while, with the big guy creating a bunch of extra possessions with tightly-contested rebounds where he just decided he was not going to let anyone else come down with the ball. It's a great sign on several levels, mostly in what it says about his physical health after some ugly grimacing and back pain earlier in the week.

When the third quarter rolled around, Embiid's help had all but dried up to start the half, so the big fella continued the onslaught. By the time he checked out of the game with under two minutes to play in the third, he was up to 37 points on 70 percent shooting from the field in just 27 minutes of action. The Bulls could not come up with an answer despite having every reason to focus all of their attention on Embiid. He was that good.

Anytime Embiid is in this form, the Sixers have a chance to win. Even on a night where there was little help from the supporting cast, that was the case on Friday, though it was closer than it should have been. When it was all said and done, Embiid had his first 50 point game of his career and the Sixers got a 'W'. Job well done.

• It will be lost in the sands of time by the time this story is filed, but the possession in the final minute of the first half where Embiid and Tobias Harris just refused to back down on the offensive glass is probably my favorite possession of the season. I would have to see the replay again, but they came up with 4-or-5 rebounds on a single possession, and when they finally emerged out of the sea of Bulls players, Embiid drew a foul and picked up a pair at the charity stripe.

The highest praise I can offer is that it was a moment Moses Malone would have been proud of. Not bad for a mid-February game against a middling Eastern Conference team.

• Speaking of Harris, he's one of the few guys who doesn't have to hang his head in shame for their offensive contributions on Friday night.

The season-long theme of playing with physicality continued against the Bulls, with Harris bodying pretty much anybody the Bulls had the audacity to throw on him in the mid-post. A year after we expected the Sixers to play bully ball, Harris has finally found a way to make that happen. Rookie wing Patrick Williams — a big, athletic dude in his own right — had the misfortune of guarding Harris at a few different points throughout the game.

As ESPN's Richard Jefferson called out on the broadcast, Harris figured out that his cover didn't read the scouting report, and he took advantage of Williams skewing too far toward the middle by blowing by him going left.

If nothing else, Harris' work in the mid-post was able to buy Embiid some possessions where he could rest up while still on the floor, and with the workload the big guy had on Friday night, that was a major blessing.

• Matisse Thybulle's impact from a box score perspective was minimal, but he had a huge task on his hands Friday night and he did an excellent job with Chicago's top perimeter assignment. Zach LaVine had some flashes of brilliance as he so often has throughout the year, but Thybulle was mostly excellent while guarding him, even on possessions where he didn't close the play out himself.

We have seen more "total package" type games from Thybulle on defense lately, performances where he has been able to combine the chaos of creating turnovers with the discipline to force players where he wants to go. Embiid was able to meet LaVine at the rim or dissuade him from an attempt on multiple occasions because of Thybulle's positioning, guiding the Bulls guard to a spot where the big guy could swoop in late.

• I say this to take a shot at the rest of the group but to praise the subject: Philadelphia's best bench offense on Friday night was to put up shots and then just pray Dwight Howard could come up with an offensive rebound. It has been the one area of the game where he has been consistently impactful this season, and they needed every single opportunity he pulled down, because they could not count on anybody else to produce against the Bulls.

If that's the cost of his typical foul trouble, I suppose they're just going to have to live with it.

• There has been a lot of discussion about the bench lately, almost all of it bad, and I can understand the concern as someone who has to watch every minute of these games. They have offered almost nothing on both ends of the floor, and it's easy to look at this group as currently constructed and think that they will not be good enough to compete in the playoffs.

They were basically the only reason Chicago hung around in this game on Friday night. Rivers tried to buy Embiid a bit more rest in the first half, and without Tobias Harris out there to prop them up, it was an absolute nightmare stretch for Philly. Tyrese Maxey clanged runner after runner, Mike Scott was basically just jogging back and forth down the court, and Furkan Korkmaz...well, we'll get to him below.

(Sticking with Maxey for a second, this sort of game is part of why you see rookies struggle to get playing time under a lot of coaches, Rivers included. It's one thing to miss shots, especially when you're being asked to carry a lifeless second unit, but he compounded that by making terrible mental mistakes and trying to make up for those all at once, instead of letting the game come to him. I have a feeling he might be parked on the bench for a while once Shake is back.)

Here's a ray of sunshine in a dark period for the second unit — I don't think they need to panic and I don't think this is the drastic problem it feels like at the moment. Shake Milton will return and give them a lift, yes, but a lot of these guys will also just be minimized or out of the rotation entirely by the time the games begin to matter.

I would bet a healthy sum of money that there will be an addition/swap or two before the trade deadline, and drawing any conclusions about this group on a night without Ben Simmons is a bit futile. When your most versatile player (and high minute man) is parked on the sideline, you're absolutely going to see guys overextended.

• The bench stinking it up is one thing, but this was an ugly game for Seth Curry and Danny Green, who were bad in their own unique (but relatively familiar) ways.

Curry's night is one you can excuse to some extent because he was just out of rhythm. I still believe he's way too hesitant to shoot sometimes, with Curry psyching himself out of several open looks on great Embiid passes, but he has been a good deal better most of the year, so I ignore the struggle to some extent.

Green was bad in the loudest way possible on defense, blown by repeatedly for layups and late on closeout after closeout he was fortunate not to get burned on. He has been a streaky player for basically his whole career, but it's a little concerning that we've seen so few actively helpful games from the veteran this year. If he sticks around past the deadline, they need a lot more from him if he is to remain in the starting and closing groups.

(I'll say this — Green did hit some big momentum threes when they needed them throughout the night. I'm just a bit shocked by how bad he has been on defense most of the season.)

• Doc Rivers just has to stagger Embiid and Harris in a game like this so that one of them is on the floor at all times. The bench has not had it for weeks now, and leaving the all-bench group out there to die is an avoidable issue.

• Furkan Korkmaz had not one, but two of the worst turnovers of the season in a small stretch spanning the end of the first quarter and the beginning of the second quarter. I have no idea what he thought he saw, but he threw two separate passes to absolutely nobody and then looked up in disbelief as other players remained stationary in the spots they had been in the whole time.

I came into the year with pretty high expectations for Korkmaz, who had a good year last year and seemed to be a guy who could benefit from Rivers' touch with movement shooters. It has gone in the other direction, with Korkmaz the obvious guy to drop from the rotation to mix things up.

Mike Scott deserves a bit of scrutiny for a very different version of ineffectiveness. Korkmaz's screw ups are louder, no doubt, but Scott doesn't do basically any of the little things right. When the standstill shooter is making the occasional open shot that comes to him, we excuse the rest, but the defensive miscues are plentiful and there are few moments where you think to yourself, "I wasn't expecting that from him!" in a positive manner.

There are plenty of standstill shooters in the world.