Instant observations: Sixers blown out by Celtics at Summer League without Tyrese Maxey 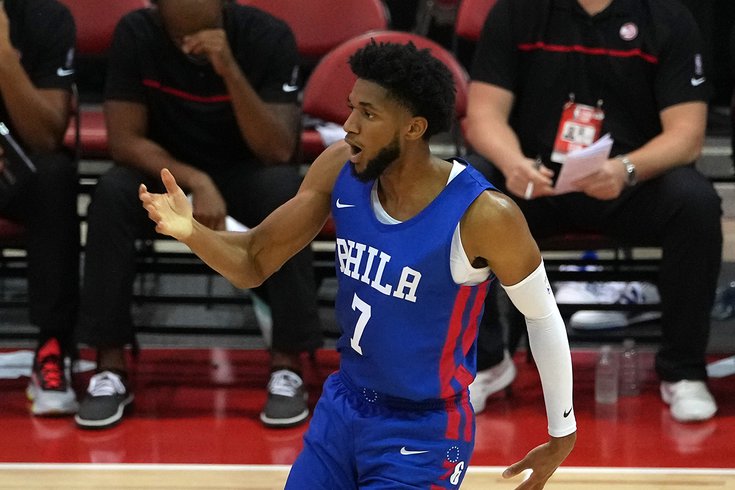 The Summer Sixers' undefeated run came to an end, with the Boston Celtics beating them up in a 100-80 massacre. Without Tyrese Maxey there to serve as a guiding force, the Sixers never really had a chance.

• Playing Paul Reed in a game without a calm perimeter decision-maker could have been a disaster, considering Reed's habit of acting first and asking questions later when he self creates too often. But this was a relatively subdued performance (in a good way!) from Reed, who did the little things to try to keep Philadelphia afloat.

Sixers Summer League coach Brian Adams has stressed the importance of starring in his role to Reed during their Vegas run, telling Reed that the production and NBA minutes will come if he buys into the must-do tasks of an NBA big man: screen-setting, rebounding, and rolling hard to the rim.

Frankly, Reed was let down by the guard play throughout Saturday's loss to the Celtics, with pick-and-rolls and handoffs stalled or ignored entirely as he tried to prompt his guys to run actions. Reed kept trying to goad his guys into running them anyway, and that's a sign of progress for a guy who has hoisted some ugly shots and overdribbled into turnovers in the past.

Signs of increased polish have been there in Summer League. Reed pulled down multiple offensive rebounds that were followed by quick up fakes, buying him a cleaner look at the rim once his man jumped at the opportunity. A more patient version of Reed is a more dangerous version of Reed,

• We haven't said his name much since Summer League began, but Filip Petrusev has made an impression with his ability to protect the rim in Las Vegas. Everything else has left something to be desired — he has struggled to finish around the basket at times and hasn't exactly been Dirk Nowitzki as a floor spacer — though I suspect the Sixers aren't too worried about that stuff for the time being. Looking at home on defense is a big deal for a guy who has already shown he can produce on offense elsewhere.

The thing that has stood out most for Petrusev is his fearlessness. Bruno Fernando came at him with bad intentions on a dunk attempt in the second quarter, and rather than shirking responsibility to avoid being dunked on, Petrusev rose to the occasion and created one of the highlights of the game for Philadelphia:

Putting yourself on the line like this is rarer than you'd think these days, and we've seen Petrusev do it often during this brief offseason run. He has professed an interest in making the jump to the NBA sooner rather than later, and he is showing the instincts to potentially make that happen.

• A few plays per game, you can see what the front office did when they drafted Jaden Springer. As if impersonating a different player, he'll bust out a little crossover move, put a defender on his hip, and barrel his way to the basket, finishing an up-and-under move that is equal parts style and substance. Even at 18, Springer has NBA strength, and he can look like a running back when he dips his shoulder into a defender in traffic.

If not for those flashes, you'd probably be pretty concerned about his chances to help the Sixers in the short-to-medium term. His defense has been stellar, if not excellent during his time in Las Vegas, but a lot of the possessions where he leads the offense end the same way — stuck around the free-throw line, with a contested jumper, tough runner, or jump pass to follow.

There have been possessions where Springer appears to have a step on a guy, only for him to give the defender an opportunity to recover and load up as a result of his two-footed leaping. It's a small sample in Summer League for sure, but he has work to do to take better advantage of his athletic tools on offense.

Philly did not draft this kid for contributions in Year 1, so the early struggles on offense aren't going to set off alarm bells yet. But based on what we've seen so far, some time in Delaware and with the skill development team will be essential this year.

• "The Summer Sixers are fun to watch!" turned out to be almost exclusively about Tyrese Maxey and the downstream impact his presence had on other guys playing for Philadelphia. With last year's first-round pick leading the way, the Sixers' collection of role players could settle into, well, roles. Once they lost their offensive alpha dog, things went a bit haywire.

The culprits were mostly the same. Rayjon Tucker, who we noted got a little too frisky in Philly's win over Atlanta on Thursday, plays like a guy who doesn't have a firm enough grasp of his offensive limitations yet. Though he's been a proficient scorer at the G-League level in the past, the Sixers surely don't need him overdribbling and taking wild stepback threes in basically any setting. That goes double for new two-way player Aaron Henry, who stepped into the limelight and not in a good way.

Honestly, there were times when the Sixers actually played too unselfishly, swinging the ball around the perimeter and passing up several good looks in the process. This is not a group that should take open looks for granted, and they paid for it against Boston.

• It was not a good afternoon for Isaiah Joe, who had impressed in Philadelphia's opening two games and came back to earth in this one. The Sixers continued to dial up looks for him throughout the game — they ran the same ATO for an above-the-break look for Joe multiple times in the middle quarters — but he could not find the range. These days happen.

The other downer came in the form of Joe's issues as a ballhandler, but those were simply a product of needing to do too much for this group. He showed off some nice dribble moves and hooked up with a few teammates for assists, at the cost of some sloppy dribbling and decision-making. Point Guard Joe is probably never going to be a thing, and that's okay as long as he continues to bang threes.

• To be clear, Petrusev's offense was downright brutal in this game. It was nice to see him beat his man down the floor on several different occasions, and just as nice to see teammates actually find the streaking big, but he got his shot packed routinely. Not exactly a high-level finisher at this stage.

• The remaining Summer League games without Maxey. Somebody want to fill in for me?