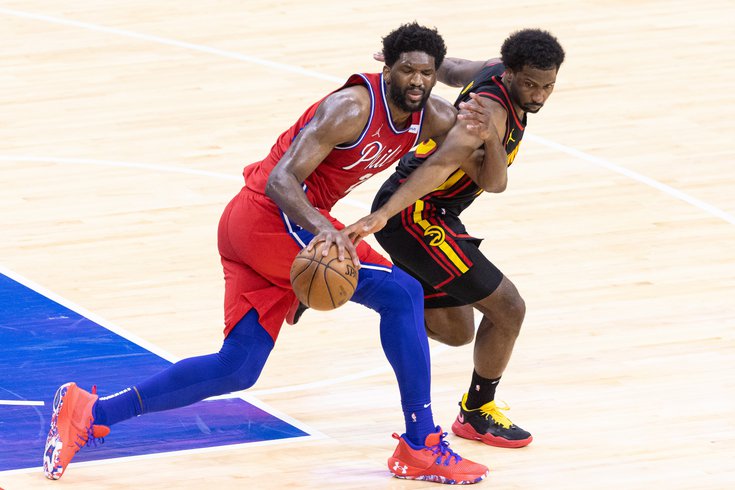 It wasn't the triumphant return to the floor for Joel Embiid most were expecting Sunday afternoon.

The Sixers looked uninspired and unprepared in the first half of Game 1 vs. Atlanta, and the Hawks ended up pulling out a 128-124 victory to steal homecourt from Philadelphia. Joel Embiid's game-high 39 points were not enough to tilt things in Philadelphia's favor.

• Embiid's availability was still in doubt with an hour to go before the game, but you would never have guessed it from how he looked once the game started. He was just about the only guy on the roster who looked ready to play from the jump, shaking off concerns that the Sixers were putting him at risk by playing him so early in the series.

This looked like any number of great games Embiid has played this season, featuring a potent mix of face-up jumpers, post moves, and his usual march to the free-throw line. Concerns about his mobility also appeared to be relatively misguided — Embiid kept up with Young when the Sixers asked him to show higher in pick-and-roll coverage, clearing an important hurdle that was worth worrying about coming into the series.

Honestly, Embiid probably could have had an even bigger night if the Sixers had made more of an effort to feed him the ball on the block. There were some rushed possessions and poor decisions made by his decision-makers, ultimately putting a ceiling on his ability to drag them back into the game.

The big question coming out of this one is whether Embiid's knee feels okay after playing a heavy allotment of minutes.

• I have long been a skeptic of Matisse Thybulle being able to play a bigger role in the playoffs, but with the way Game 1 went, it feels almost mandatory to give Thybulle some of Danny Green's minutes moving forward. Some of that comes down to Green having an absolutely miserable Game 1, and some of that is a credit to Thybulle, who at least made Young work hard to get his points.

Young's night slowed down almost immediately after Thybulle took the assignment. Some of that was Young slowing down after playing unsustainably great for the opening half, but Thybulle at the very least wasn't a moving target in isolation, which puts him several levels above Green's performance.

• Through a combination of making the proper adjustments, Atlanta buckling under full-court pressure, and the noise of Wells Fargo Center, the Sixers somehow managed to make this a game in the end. It should be heartening for this group that they were able to make this a game despite playing one of their worst halves in months to open the second round.

One thing they can feel confident in moving forward: these Hawks seem unprepared to deal with pressure defense. The Sixers can't go full Larry Brown and press Atlanta the way the 2001 team did frequently, but it's yet another changeup Philly can use to keep the Hawks on their toes.

• If the Sixers were walking into this series expecting to play a team equivalent to the Washington Wizards, they got a huge wake-up call in the opening quarter of the series. Perhaps that will end up being a good thing, a warning shot that wakes them from their stupor.

In any case, the Sixers were far too sloppy in the opening 12 minutes. They have taken better care of the basketball this season after years of turnover-plagued basketball, but they coughed the ball up eight times in the first quarter in a staggering number of ways. There was a brutal pass from George Hill on the baseline, Tyrese Maxey stepping out of bounds while pushing the pace at the end of the quarter, a misfire from Joel Embiid, and even a pass from Ben Simmons that probably should have earned a foul call. But Danny Green didn't get it, and the Hawks went the other way for three more points.

If you don't take care of the basketball in the playoffs, you're going to have a bad time.

• Expectations were high for Maxey coming into round two. He may well have been the worst player on the floor in the first half (non-Danny Green edition), and that's saying something when you consider how bad the Sixers were as a team.

I don't chalk it up to anything about Maxey specifically, he looked like a garden-variety rookie getting caught in the playoff tide. There were sloppy turnovers, overzealous gambles on defense, and an inability to finish in traffic, signs of the game getting a little too quick for him now that they're up against a non-Wizards team.

This sort of performance is exactly why Shake Milton's regression is so painful for the Sixers. Milton isn't exactly a proven playoff performer himself, but he's got a bit more seasoning and (in theory) should be a guy they can turn to in this spot to right the ship. But he was probably their worst player in round one and hasn't been consistently good in months, leaving the coaching staff in a tough spot.

• We have been waiting for the all-bench lineups to cost the Sixers for a while now, and Rivers choosing to stick with them in this game, with the Sixers already down double-digits and fading fast, was a bizarre decision. The coaching staff seems to think they're still playing the Wizards or a team of their ilk. Why try to climb out of a big hole using a group that has habitually lost their minutes all season? Who does that make sense to?

• I'm all for unselfish basketball, but the Sixers gave up what appeared to be a decent handful of open looks in both halves for no good reason. You don't always have the luxury to chase great shots at the expense of good shots in the playoffs. If you're a good shooter and you have a reasonable amount of space to let it fly, you absolutely have to do it.

This was an issue for any number of players on Sunday — Tobias Harris, Seth Curry, Shake Milton, Furkan Korkmaz, and Matisse Thybulle all had at least one play where they passed up open looks and forced teammates to take tougher shots deeper in the shot clock. Tough to win that way.

• There were a lot of complaints about the officiating at Wells Fargo Center on Sunday, to some degree rightfully so, but the Sixers did not exactly make the most of their time at the charity stripe. Ben Simmons registered his first free throws of the season against Atlanta, and his woes at the charity stripe do not appear to be going away, with Simmons going 1-for-6 on the line and not really coming close on a lot of his attempts.

He wasn't the only culprit. Maxey bricked a pair during an important stretch of the fourth, Embiid and Harris missed one each, and Philadelphia's lead in free throws attempted ended up being squandered by the home team.

• Just so we include him here before he gets torched further below: Danny Green was horrific on Sunday. Could not stop Young and could not hit a shot. Brutal effort.

• All fingers were pointed at Danny Green as early as the first quarter, and he was certainly having a bad time defending Trae Young. If you are of the opinion that Ben Simmons should be Young's primary cover, I am not here to argue with you. Leaving Green on Young for as long as the Sixers did was absolute malpractice.

That said, I'm not exactly sure why the Sixers opted to go the drop coverage route against Young, who made a killing against the Knicks when they showed it and has generally killed teams out of that look all year. Whether they were worried about lobs to Clint Capela or just trying to keep Embiid from playing ultra-active due to the knee issue, Philadelphia was basically daring Young to beat them at the second level.

Once he started to see shots go down from there, Young put the Sixers in scramble mode, knocking down threes when they gave him daylight and coasting right by Green when he tried to get up into his chest. By the time the Sixers tried to throw different looks at Young, it was too late.

Your initial game plan matters a great deal against high-level players because if you allow them to get going, it doesn't really matter who or what you throw at them as time wears on. The margin for error gets smaller when you go deeper in the playoffs, and they found that out the hard way.

• Throughout the season, Doc Rivers has justified defensive matchup decisions with a simple explanation: he doesn't want Simmons in foul trouble, and he likes using Simmons as a roamer. When you're playing the Charlotte Hornets in mid-February, that's an understandable stance to take. When you're kicking off a playoff series and Trae Young is in the process of doing whatever he wants and dominating the game because you refuse to change the matchup, that's a much different story.

There have been plenty of games this season where Simmons' box-score stats have looked underwhelming, but his defense has been able to make up the difference. The Sixers didn't even really give him a chance to do that for the first half of Game 1. He made an effort to get the Sixers rolling with some energy plays in the second quarter, but those are never going to offer equivalent value to the shutdown defense he can play against a guy like Young.

If you want to try Green on Young to start, by all means, do so. There's absolutely no justification for beating your head against the wall as long as the Sixers did. The Hawks didn't even need to send screens in Young's direction once he got rolling, simply relying on him to put Green on his heels and beat him in one direction or another. A person watching their first Sixers game ever could have told you to change the matchup.

Hell, the worst part is that Simmons didn't even do a good job of dealing with his assignment, Bogdan Bogdanovic, who canned a bunch of open threes with Simmons cheating/"roaming" too far off of him. They got the worst of both worlds, and it's hard to argue they deserved anything different.

• I think the worst thing you could say about the Sixers in a dispiriting round one performance is that most of the issues should have been identified ahead of the series. Hell, we covered two of the biggest ones in our preview for the series: they couldn't figure out what to do against Young in pick-and-rolls, and they let him stand in the corner for 90 percent of the game on defense.

The coaching staff made a lot of necessary adjustments in half two, so the hope will have to be that they'll carry those lessons over and get it right moving forward. Giving away a game before figuring it out isn't ideal, but it's better than getting smoked for four straight quarters because you're too stubborn to change anything. We'll see where the series goes from here.

• Everybody seemed to love it, but I'm going to go ahead and chalk this one up to having a make-believe wrestler ring the bell before the game. Grow up, Peter Pan.