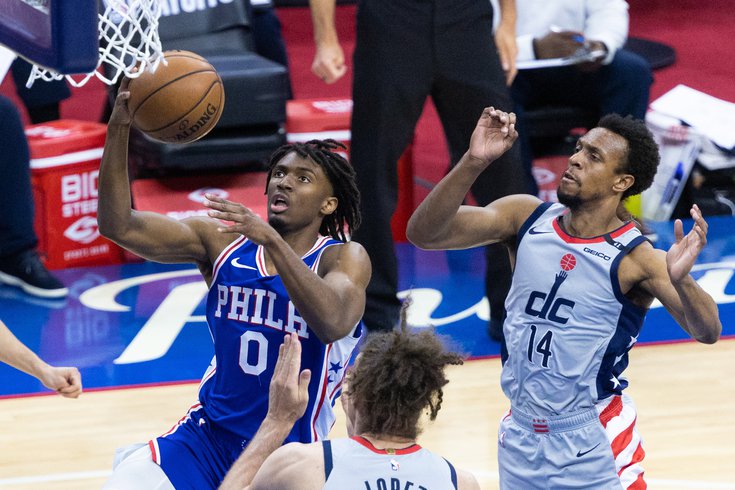 Five games and an injury to their best player later, the Sixers' first-round victory over the Washington Wizards is not as sweet as perhaps it could have been. But when you consider the average margin of victory and all the positive signs coming out of their performance, you'd be crazy not to be at least a little satisfied with their effort in the opening round.

Before we move on to talking about the matchup with Atlanta specifically, let's take a moment to reflect on the positives of the series they just finished.

Tyrese Maxey has something to offer right now

Who could have expected young Maxey to have a critical role in this series? Only everyone who watched him over the final month of the season, I suppose. But when the Sixers were in the middle of this crazy season, games piling up fast and furious, there was one primary reason the head coach didn't have him in the rotation: the kid couldn't defend.

“He was our worst defender and it wasn’t close, the numbers said that to you,” Rivers said after Philly's Game 5 win. “The last month he has turned a corner defensively. He made so many little plays defensively — rebounds, digs, getting steals. Obviously, the offensive energy was there but watching him grow defensively for this team has been absolutely amazing.”

Fact check: mostly true. Philadelphia's defensive efficiency was worse with Maxey on the floor (110.6) than it was with any other individual player, and a lot of those issues were connected to his rookie mistakes. Cheating too far from shooters, miscommunications in transition, and any number of other problems that caused Philly to bleed points with him on the floor. If he hadn't tightened that up, he never would have had a chance to lift them up on offense.

Maxey made sure to give himself that opportunity through his work, which continues every day. The rookie continues to ask questions to veterans like Danny Green and George Hill, important coaches like defensive coordinator Dan Burke, and anyone whose attention he can grab if they can help him improve. The subjects change constantly, ranging from when to tag rollers to something as simple as what spot he is supposed to be in.

At the other end, Maxey has been electric, feeding off of the energy provided by the Philadelphia crowd and showing the resilience to fight through tough stretches on the road. As the Sixers worked through some early issues in Game 5, it was Maxey who gave them enough juice off-the-dribble to hang around, buying time for their starters to really get rolling.

Had he finished the dunk attempt he was fouled on in the first half, I am fairly confident the Wells Fargo Center would have collapsed. And the crowd's love for Maxey is a major feature of the experience — all it takes is a bucket or two from this kid for the building to start rocking, which puts wind in the sails of the entire group.

Doc Rivers is a little more flexible than advertised

The book on Rivers coming into this season ended up being an accurate guide for how the season played out. He got more out of his key guys by setting clearly defined roles, he assembled a talented group of assistants who helped fill in the gaps, and he made some maddening choices in the name of consistency, predominantly with all-bench groups and Howard-Simmons lineups.

Coming into the playoffs, then, it was fair to wonder how creative or flexible Rivers would be. Between benching Shake Milton in favor of Maxey and leaning into small-ball to open Game 5, the evidence suggests he is a man who wants to use his recent playoff defeats as lessons not to be repeated.

The heartening thing about this development is that this came in a series where Rivers had the right to feel more comfortable and confident than he will in any series the rest of the playoffs. Washington was not a team built to seriously challenge them. Still, the head coach reacted to what was in front of him, rather than what he probably hoped to have in front of him, riding hot hands and changing things around whenever necessary.

Playing small in the manner Philadelphia did in Game 5 was not exactly a no-brainer. They didn't work out of that look basically at all this season, and going to it in a playoff game necessitated some important messaging from the coaches before the closeout game.

"I thought our job was to make sure everybody was in the right place, make sure we space right," Rivers said Wednesday. "If we're going to go small, we had a no-paint rule like in transition. We said the paint, as far as running without the ball, was an electric fence. You had to run behind the three, we had to keep the floor open."

They will face better teams and better defenses from here on in. We don't know what Rivers will do to beat them, but you can feel slightly more confident that they'll change what they're doing (or who they're playing) if Plan A isn't working.

Washington is considerably worse than many thought

Look, no big quotes or fancy analysis here. The Wizards just have extreme loser energy in spite of the talented backcourt. Russell Westbrook is going to fall on the sword playing his way until he can't anymore, and both he and Bradley Beal decided defense was optional for this series and most of the season.

Speaking of Beal, this has to be one of the more outlandish post-series quotes in recent memory:

Bradley Beal on #HereTheyCome: “I still strongly believe in my heart that we could have taken them to 7”

Outside of Game 1, none of Philadelphia's wins were close basically at all. The only game the Wizards won came when Joel Embiid got hurt in the middle of a game and the Sixers had to scramble to adjust on the fly. It's one thing to be confident in your abilities, but this is just pure delusion. Maybe that's why Beal has shown no inclination to leave a miserable franchise yet.

The Sixers have multiple outs, even in the playoffs

The old "next man up mentality" cliche was trotted out in the hours before Game 5, as Philadelphia's George Hill spoke to reporters about how the team would carry on without Embiid in the short-term. That sort of thing sounds good on paper, but making up for a star player's absence is a good bit tougher in the playoffs than the regular season.

If you want to continue believing in their title chances, focus on how different each Sixers win was during a fairly dominant five-game victory:

This time of year, a lot of the conversation centers around identity, rightfully so. The teams that can impose their will on a game and make the opponent play on their terms often emerge as winners. Pre-playoffs, a lot of the chatter in the locker room was about the Sixers' defensive calling card and how that would ultimately be their source of success.

Frankly, you could argue this series was played on Washington's terms stylistically, with most games being relatively high scoring and up-tempo. Even still, the Sixers were able to roll with the punches and close this series out in painless fashion, despite needing to get to that end result in a number of different games.

Really, that has been the story of this season. Whether it is Simmons' all-around contributions, Harris' steady scoring in crunch time, Danny Green getting hot from deep, or the man in the middle carrying them, this group simply finds a way to get it over the line. They not only survived a stretch without Embiid midseason, they played well enough (admittedly with some lucky breaks in the schedule) to successfully hold off challengers for the No. 1 seed.

The biggest tests are still in front of them. But this team is sure of itself, even in uncertain times, and that is the mark of a group that will be tough for anyone to knock out of the playoffs.