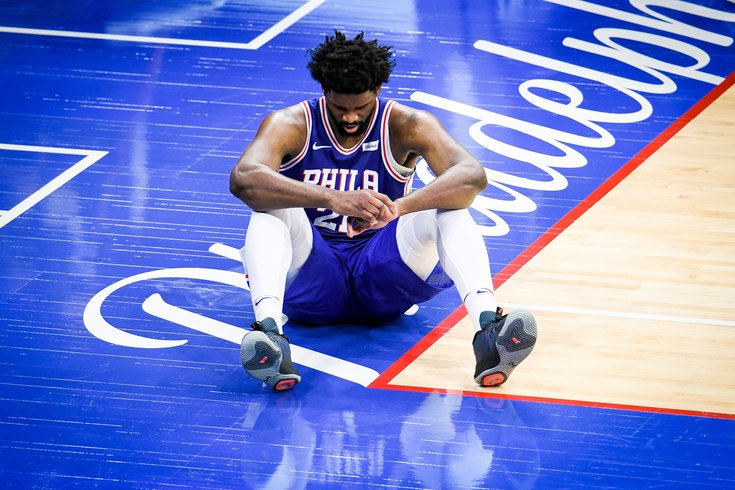 Sixers center Joel Embiid has a small lateral meniscus tear in his right knee, the team announced on Wednesday afternoon, after evaluation of his MRI results over a 24-hour period by numerous medical professionals. He is officially out for Wednesday's Game 5 against the Washington Wizards and is considered day-to-day by the team for the time being.

The theme for Philadelphia right now is wait-and-see. As of this moment, the Sixers can only say with certainty that Embiid has a small tear. Though it's likely the injury may have happened during his fall in Monday's Game 4 loss, sources close to the situation told PhillyVoice that the exact timing of the tear was unknown.

The overwhelming consensus from the doctors consulted on the issue — and the Sixers have spoken to many before releasing their statement on Wednesday, sources say — is that Embiid's injury is an issue that will have to be treated based on the symptoms he experiences on a day-to-day basis. In practical terms, that will mean managing and being aware of various issues, including but not limited to Embiid's pain tolerance, swelling in the impacted area, and overall health and fitness throughout the playoffs. Managing Embiid's fitness while trying to keep him on a relatively "safe" workload is a major challenge in the weeks ahead.

At the moment, it is too early to make a declaration on just what this means and how dire the consequences are for Philadelphia. In theory, a source close to the situation said, every possible outcome is on the table, ranging from the situation/knee worsening and the Sixers having to shut him down, or Embiid being able to play through the issue and help the team try to make their first push back to the Finals since 2001. The day-to-day label is in place as the team works to figure out a plan.

"We don't know," one source said of the outlook on Wednesday, "but there's still good optimism."

It is still devastating news for Embiid and the Sixers even in a best-case scenario. The team looked poised to have him healthy for a full playoff run for the first time in his career, a significant factor in their pursuit of a championship. That is suddenly up in smoke, and the Sixers will at the very least be forced to play Game 5 against the Wizards without him.

Beyond that, no one with the team or close to Embiid is willing to say, which is either terrifying or heartening depending on your perspective.

In a sense, this is familiar territory for the Sixers, who have had to navigate when to play Embiid and when to sit Embiid for the majority of his career. The difference now is they are weighing their chances to go after an NBA title, and not simply in the process of restoring the team to respectability. It's an unenviable position to be in, with the Sixers (and Embiid himself) forced to simultaneously look out for Embiid's long-term interests, weigh their chances to win a title, and potentially subject themselves to Embiid's wrath if they have to make the call to keep him out at some point during this playoff run.

Whatever margin for error the Sixers had coming into these playoffs is gone now. Buckle up.