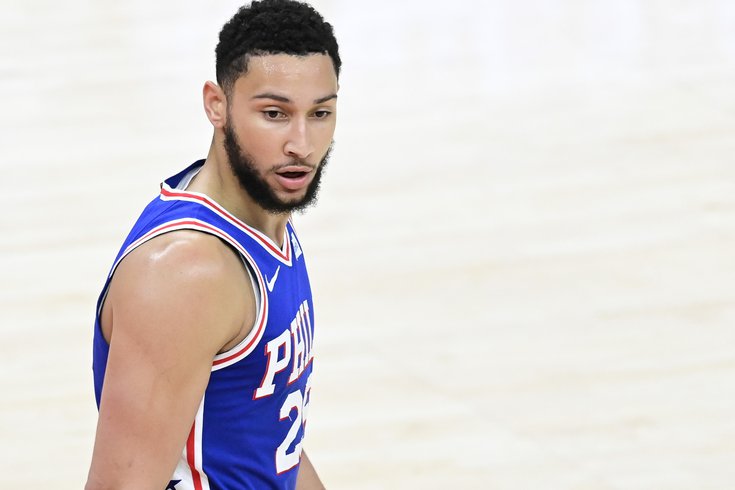 Philadelphia 76ers guard Ben Simmons looks down court in the second half during against the Washington Wizards.

Game 4 was not the first time the Washington Wizards have decided to hack Ben Simmons in a gratuitous fashion. In early December 2017, Simmons walked to the line 29 times under the marching orders of Scott Brooks, who tried to beat Philadelphia by uglying up the game. It wasn't anywhere near that gruesome Monday night, but a late May game in the playoffs is considerably more meaningful, and the Sixers ended up losing a potential closeout game after the Wizards sent Simmons to the line in crunch time.

Doc Rivers, mind you, was not having that conversation after the game. As debates about Simmons rage on in the Philadelphia area, Rivers grows more impatient by the day with the way his point guard is covered.

"You guys keep this Ben Simmons narrative alive, which to me is freakin' insane [with] how good this guy is and all the things he does," Rivers said. "Ben is not a 40-point guy, it's not what he does, he does other things for your team. And I just don't understand why that's not sinking in, in our city. Everybody on the team doesn't have to be a scorer to help the team. Ben scores, but Ben creates scoring for us, that's what he does. If I'm Ben at some point I'd get tired of it. I just would, because he's just too good and he does so many good things for this basketball team, and I keep saying, celebrate him! Celebrate all the stuff he does well, we don't do that enough."

"He didn't [make all his free throws,] but he still does other things. He split them all, and again, analytics, I'll take that. Obviously, I want him to make more...listen, you guys keep the Ben narrative going. We're just going to keep playing."

Rivers has been calm, cool, and collected for basically this entire season, through tough losses, weird performances, and injury-plagued stretches for his team. Defending Simmons is basically the only time we have seen him get hot in front of a microphone, though he has certainly had a commanding presence on the sidelines and in front of his guys.

Perhaps that illustrates the challenge of getting through to Simmons. Rivers' predecessor tried a number of tactics to bring out the best in Simmons, including publicly challenging him to shoot more threes and then later admitting he'd failed when that fell on deaf ears. Through all the improvements the Sixers have made year-over-year, Simmons has been the constant, a lightning rod for fans and analysts alike. Simmons is either stoic or stubborn depending on your view of the situation, and camps of fans increasingly find themselves entrenched in those black-and-white areas.

With Joel Embiid ruled out due to right knee soreness, there was an opportunity for Simmons to rise to the occasion and pick up the slack in the scoring department, but foul trouble kept him out for much of the game. Only being on the floor for 25 minutes is a perfectly reasonable explanation for not picking it up — you can only contribute when you're actually on the floor. But there are many who still won't accept one of the leaders of the team shooting five times in a game regardless of context. Hell, Ish Smith is a miniature backup who played five less minutes than Simmons and still managed to equal his shot total playing next to a gallery of black-hole teammates.

"I was a little passive at certain times," Simmons said after Monday's loss. "But at the same time, I was trying to get the great looks, you know, for my teammates. [Furkan Korkmaz] came in, knocked down a quick one, and put us back in the game. Then he had another one at the top of the key, missed that, but we got some good looks."

Again, the dueling camps emerge. Those who side with Simmons see open looks and stand with the point guard they root for, the guy they hope can lead Philadelphia to a title from the perimeter. There are always outs for him, many of them reasonable. Furkan Korkmaz did go on a nice run to open the fourth quarter.

Then there are those who view him as he and so many others label him — a star, a max-contract player, a generational talent — and question how a man can lead if more often than not he is willing to let others determine the team's offensive fate. He is not the first nor the last player to be accused of passivity in big moments, and he is also unlikely to escape the vortex without a material change to his game. Those people do not want to hear that you are trying to ride Furkan Korkmaz when the going gets tough.

Splitting every free-throw trip in a hacking situation is normally all you need to do to disincentivize the opponent from hacking. Earning a point per possession when you don't have to burn clock or exert energy isn’t the worst thing in the world. Teammate Danny Green understood Washington's decision to roll with the strategy the way they did, but he saw other reasons for Philadelphia's defeat in Game 4.

"[Washington is] not stupid. They've looked at film, they watch, they see numbers and statistics, so they know he wasn't shooting that well from the free-throw line for the series. He made five tonight, which I'm cool with, obviously he's going to be more critical on himself than anybody else. He's going to be in the gym and making sure that he gets his rhythm back. It's more of a mental thing than anything for him, but that's not why we lost the game. It wasn't free throws, it wasn't the referees, you know, it was us not executing the way we know we should and the way we could down the stretch....we got outside of our identity tonight."

Again, sensible points were made. Had the Sixers been able to get stops on defense as Simmons was in the process of being sent on the free-throw parade, they would have come out of an ugly situation sitting pretty.

Part of the reason they didn't, however, was because of the lineups they have to put on the floor to make the offense work without Embiid in the game. Dwight Howard has been a perfectly capable backup center this year, but the Sixers are a spacing disaster when he and Simmons share the floor together. Rivers made the choice to go small, closing with a Simmons-Harris-Korkmaz-Green quartet with one of Curry or Maxey in the fifth spot. It should surprise few people that they couldn't contain penetration and ended up giving up open looks at the rim and from the perimeter because there was no rim protector serving as the last line of defense.

In so many words, Rivers agreed with Green's assessment on who or what to blame. The head coach scoffed at the idea of removing Simmons at any point during the stretch run, noting that he would "pass" on that suggestion. Rivers seemed so stuck on that idea from the middle of his Zoom presser that he revisited it later on, swerving from a conversation about Simmons' post-All-Star percentages to make a point about pulling him off of the floor.

"Just keep working on them," Rivers said about the free-throw issues. "I think he will. I didn't think he was scared at the moment, he just didn't make them. So you know again, with Ben we're going to keep him on the floor unless you guys want us to bench him the whole game. If anybody wants us to do that, just let me know. And then I'll know you don't know basketball."

Nothing of the sort has ever been mentioned, but that is the state of the Simmons discourse both locally and nationally. Bad-faith arguments rule the day.

The Sixers, who provided very little insight on Joel Embiid's health in the moments following the game, are suddenly staring down the prospect of missed time for their best player. Game 5 on Wednesday will be the first game in Philadelphia with a capacity crowd since last March, a setting that might just will the Sixers to win regardless of who suits up and how much fight the Wizards have left in them.

Simmons, in theory, has an easy job to do with his teammates ("Take care of business at the crib," rookie Tyrese Maxey says). He has an opportunity to build on what has been a strong series overall, pick up the slack if Embiid is out, and lead the team to victory so they can move on without subjecting themselves to more wear-and-tear in a gimme series. And on the matter of free throws, Simmons doesn't believe this is complicated in any way.

"Step up and knock them down, for real," Simmons said Monday. "That's about it."