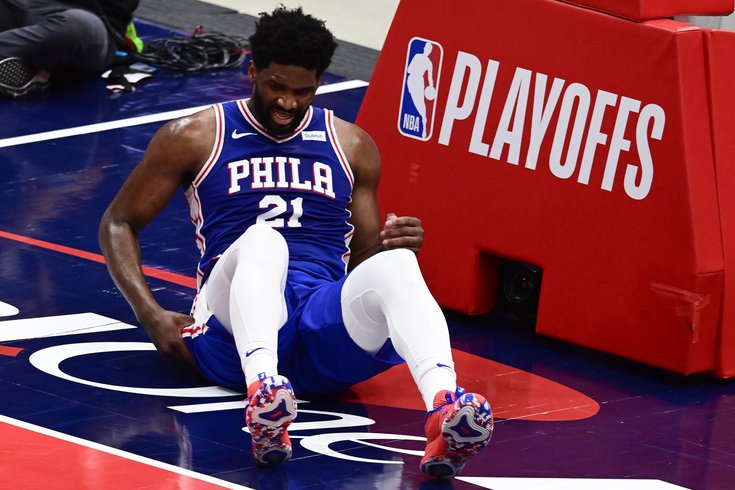 Joel Embiid is not returning to Game 4, with what is being called a sore knee.

The Sixers escaped the first half of their Game 4 matchup against the Wizards with a one-point lead, but the big story was the loss of center and MVP candidate Joel Embiid, who left the game and did not return with what the team described as right knee soreness.

Embiid took an awkward fall late in the first quarter where he appeared to land on his lower back/hip and continued to play after the fall before ultimately going to the locker room after the first quarter and not returning before halftime, when he was finally ruled out for the night.

Here's a look at the fall:

No official word from the Sixers yet on Joel Embiid’s injury, but here’s the fall he took not long before leaving for the locker room.pic.twitter.com/s3NufD3LXs

As you can see, Embiid initially appeared to be grasping his lower back, which is an area he's dealt with injuries in before. However, his knee also appeared to buckle slightly on the way down. And a knee injury would be considerably more concerning, especially considering the fact that the Sixers big man missed 10 games earlier this season with an injury to his other knee.

If the Sixers are able to finish off the Wizards in Game 4 and complete the sweep, which is not necessarily an easy task without your best player (not to mention another, Ben Simmons, in foul trouble), that will buy Embiid some much-needed time to recover. If not, this series could get interesting quickly.

That being said, we'll have to wait until after the game for any additional information on the status of Embiid and to see how serious the injury actually is, so be sure to check back for updates.

UPDATE: Embiid is scheduled for an MRI and the results are expected sometime on Tuesday. Stay tuned...