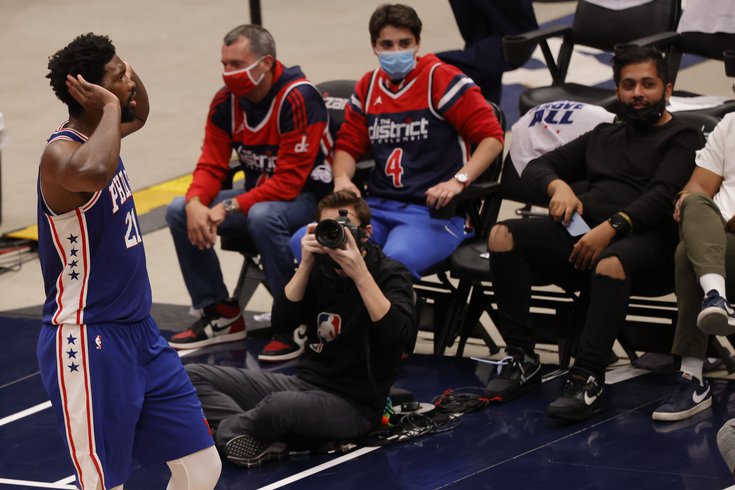 Philadelphia 76ers center Joel Embiid pumps up the crowd during Game 3 against the Washington Wizards.

UPDATE [8:55 p.m.] — Sixers center Joel Embiid has been ruled out for the game with "right knee soreness" following an awkward first-quarter fall. He briefly returned to the game after suffering what looked like a lower back injury, but spent the entire second quarter in the locker room before being diagnosed with knee soreness at halftime and being ruled out for the game. Click here for more.

With a win over the Wizards in Game 4 of their opening-round series on Monday night, the Philadelphia 76ers can complete their first playoff sweep in 30 years (1991) — and their first in a best-of-seven series since 1985.

The top-seeded Sixers are looking to flip the script after they themselves were swept out in the first round by the Celtics last season in the bubble, an outcome that ultimately led to the ouster of Brett Brown and the eventual arrival of Doc Rivers and Daryl Morey.

What remained, however, was the nucleus of Joel Embiid, Ben Simmons and Tobias Harris, each of whom have taken a turn shining in the first three games of the 2021 playoffs, a good sign moving forward for a team that rightfully has serious championship aspirations.

Currently, they're +700 to win it all at four of the five sportsbooks listed at Pickswise, which actually gives them the third best odds in the Eastern Conference and fifth best overall. While that might be a little surprising for a team that finished the best record in the conference, it's not all that different from the odds throughout much of the second half of the season.

Still, they're heavily favored in Game 4 — by nine points, to be exact, over at FanDuel — and can finish out their first-round series with a win. After that, they'd face the winner of the 4-5 matchup between the Knicks and the Hawks, while the No. 3 seed Bucks, who recently swept out the Heat, will likely face the No. 2 Nets when they wrap up their series against the Celtics.

But let's not get too far ahead of ourselves. The Sixers still need to take care of business on Monday night in order avoid the series coming back to Philly for a Game 5. The game tips off at 7 p.m. on TNT and NBC Sports Philadelphia, and you can follow along for all the latest news, analysis, highlights and more right here in our live tracker...