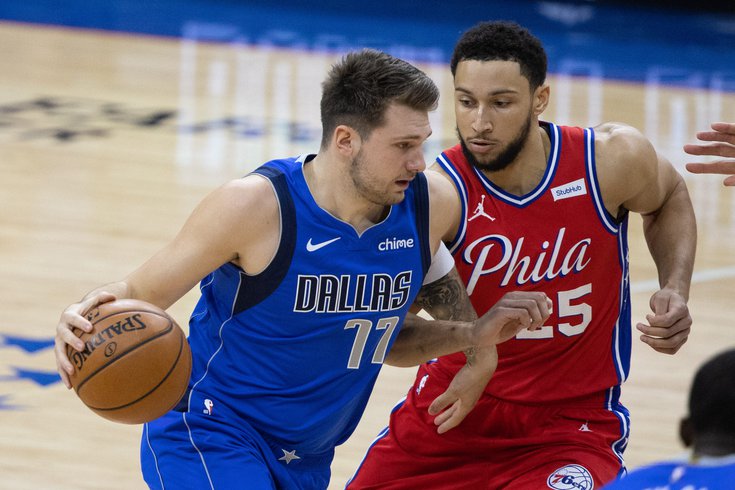 Ben Simmons continues to show he's one of the best defenders in the NBA.

The Sixers had one of their best defensive games of the season in a 111-97 victory over the Mavericks, highlighted by Ben Simmons' work to slow down Luka Doncic.

• There are games this season where I think "by the numbers" measurements have overstated Ben Simmons' success vs. another team's top assignment. I am not sure there's a metric in existence that could properly convey how badly Simmons beat Luka Doncic into the ground on Thursday night. He took one of the league's great all-purpose threats and put him through hell for most of the night.

Doncic is usually the sort of player who can carry the Mavericks on offense to give his team a puncher's chance, but Simmons was draped over him for most of the night, making it difficult for Dallas' star to get downhill and create the open looks his teammates tend to cash in. You could see every element of Simmons' defensive package coming together — the ability to navigate traffic, his combination of strength and speed, and the awareness to know when to take a gamble and when to simply hold his ground.

(He did not slow down Doncic by himself. Joel Embiid was as good as he has been all season as the second man in pick-and-roll defense, using excellent positioning to feel out Doncic in the painted area. The big guy walked the tightrope in inch-perfect fashion, preventing good looks for Doncic while never straying too far to open the passing window for one of the league's best playmakers. Embiid's offense was an adventure against Dallas, but he was damn near immaculate on the other end.)

It was a two-way beatdown from Simmons, who made Doncic (and the rest of the Mavericks) feel him when he caught the ball on the low block. Poor Jalen Brunson was the victim of some switch hunting for the Sixers throughout the night, with Simmons absolutely bulldozing him on one first-half possession that ended with an emphatic dunk, one of a few he punched through against the Mavericks.

The offense almost doesn't matter when he's this dialed in on the defensive end. This was an ugly, bruising game for long stretches of the night, and I mean that in the best way possible for Philly. The ability to drag teams out of their comfort zone to make them look bad is what can separate them from some of the other contenders in the East. It's up to their lead duo to get them to that level regularly.

• Another defensive detail worth noting — Philadelphia's help defense from the weakside corner was as good as it has probably been all season. On the rare occasion where the Simmons-Embiid combination couldn't stop Doncic from finding a passing window, the Sixers timed their rotations at an expert level. That included guys who were defensive question marks coming into the year, including Shake Milton, who has been surprisingly effective on that end this year.

• Seeing Seth Curry and Josh Richardson go up against one another really drove home the margin by which the Sixers won their draft-night trade with Dallas. Richardson's issues are basically exactly the same in Dallas as they were in Philadelphia, while Curry's strengths have continued to shine in a different team context for the Sixers.

Turns out, guys who can dribble and shoot help out your basketball team, and erratic decision-makers with good, not great skills are tougher to get comfortable than you might think. When Richardson isn't actively creating value with the ball in his hands, which happens very little, he doesn't have a whole lot of play-to-play utility..

Curry even showed some defensive flashes on Thursday night, forcing the Mavericks into a 24-second violation on the first possession of the game by getting up in Richardson's grill. Certainly not something you can count on him to do with regularity, but he showed a bit of fire matched up against the guy he was traded for, which I personally always love to see.

• We are back on the good side of the Dwight Howard coinflip, and it has given some life to a bench group that is otherwise searching for answers right now.

The best offense Philadelphia's second unit can run a lot of the time is to just put up a jumper or runner and hope Howard can come down with the miss. He is coming down with so many offensive rebounds that it is honestly hard to believe sometimes, and he's doing so without the overzealous elbows and shoves that put him in foul trouble early this year.

Though Shake Milton has struggled to get it going offensively since returning from an ankle injury, his pick-and-roll exploits with Howard have been as good, if not better than they've been all season. Their timing and chemistry is excellent, and Milton is one of very few guys on the roster who seems to understand the importance of pass placement when feeding the big guy. He has just enough patience to suck the defender in, and just enough know-how to find Howard's hands on the way to the cup.

• The best part about this game for the Sixers was their final kick in the second half. They have been missing the killer instinct to finish teams off after building big leads, and that has forced Doc Rivers to play his starters big minutes in games that should have been sewn up long before crunch time.

Seeing the bench mob close the game out has to be a good feeling for Simmons, Embiid, and the rest of the gang, who are going to need every bit of extra rest they can get heading into a brutal second-half slate.

• Joel Embiid's torrid shooting has cooled off over the last week or so, a development I warned against in earlier articles that could eventually cost the Sixers a game or two. Thursday night, Embiid did a good job of not allowing a tough start to drag him down mentally, and he stayed locked in on defense despite another game of poor shooting. His defense was enough to put him in "The Good" in my book, but a 5-for-20 night is still a 5-for-20 night.

He can't will shots into the basket, but it's up to him to choose how he decides to approach attacking the basket. Far too often lately, Embiid has been trying to bait foul calls that simply never come, made worse by the fact that he has viable paths to scoring without fouls being called on these plays. It is often an oversimplification to just tell someone to, "go up strong" but that would really serve him well when he has guys on his hip who have no business guarding him.

There's another area where I fault Embiid and the Sixers generally — five years into his reign as a dominant big man, they still have not figured out how to help him exploit big, slow-footed centers on offense. Up against former teammate Boban Marjanovic at the start of the game, Embiid often did exactly what Dallas had to be begging for on a given possession, facing up almost exclusively and allowing Boban to play stationary defense.

It's a variation of the gameplan we've seen against, as another example, Enes Kanter. There are a lot of players who you could say are bad/limited defenders generally speaking that Embiid doesn't punish enough. Maybe that's fixed with personnel changes, as Embiid has hardly ever played with a high-level pick-and-roll guard, but he's too good to let teams off of the hook like this.

(There was some grumbling about his decision to shoot a bunch of threes in the first half, as there often is, but I think that part was perfectly justifiable. If the Mavericks are going to have Boban playing drop coverage and hanging near the paint at all times, you either bomb away from three until they can't take it anymore or force him to defend pick-and-rolls. The Sixers landed on the former, and it's a perfectly reasonable choice.)

• Matisse Thybulle could not find the pulse of this game on Thursday night, leading to some head-scratching moments (mostly fouls) on the defensive end of the floor. That's the area where his tools and his instincts are supposed to carry him, so you can only imagine how much of an adventure the full-game experience was.

The Sixers really need another perimeter bench player who can offer them some semblance of two-way play, because very few of these guys have the ability to make up for their signature skill drying up. Getting even one of those guys could dramatically change the floor and ceiling for the second unit.

• After coming up with a steal in the third quarter and springing a Philadelphia fast break, Tobias Harris left the game and headed straight to the locker room, never to return the rest of the night. Philadelphia ruled him out for the game with a right knee contusion before the quarter had come to an end, and now everyone will have to hold their breath and hope that nothing serious is afoot (and in fairness, we didn't hear anything either way quite yet).

The Sixers have had to deal with COVID absences and lingering injuries throughout the season, but they have avoided major issues for their top players, with a game or two missed here and there the worst they've had to absorb. Harris is a vital piece of this group whose shotmaking helps sustain bench groups and the starters alike, and losing him for any period of time would be a big blow.

• The offense in the first half definitely fits that description. Philly's defense deserves credit for their contribution to that problem, but Dallas wasn't doing anything special.