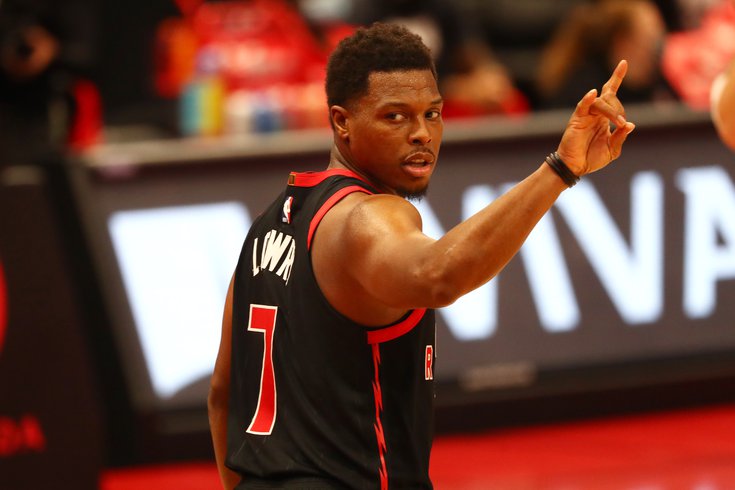 The Sixers sit atop the Eastern Conference over 40 percent of the way into their season, and there are plenty of positive signs to suggest they could contend this year. Joel Embiid is in MVP form, Ben Simmons has rebounded from a tough start as a scorer, and Tobias Harris is miles more comfortable under Doc Rivers, with that trio easing the burden on their supporting cast.

Unfortunately, the Brooklyn Nets are now breathing down their necks. Winners of six straight games — including road victories over the Suns, Lakers and Clippers in succession — the Nets have found their stride even without having their full lineup of stars every night. If the Sixers want to fend off Brooklyn's push, it might take a sizable upgrade to the rotation that can boost the starting lineup and stabilize bench lineups with more ballhandling. Could they turn to Raptors guard and Philadelphia native Kyle Lowry?

Lowry's name has been a popular one in fan circles over the past couple of months, mostly because there has always been an undercurrent of love for the former Villanova and Cardinal Dougherty star. The chatter picked up again on Monday morning when Kevin O'Connor of The Ringer namedropped Lowry as a person of interest for the Sixers:

The Sixers, meanwhile, could make a big acquisition of their own. League sources say Philadelphia, which came up short in its bid for Harden, is still seeking major moves to increase its championship odds. The trade market still needs to take shape in the coming weeks, so realistic targets are unclear. But one name to monitor is Raptors point guard Kyle Lowry, a 34-year-old Philadelphia native in the final season of his contract. A veteran perimeter shot-creator is the only piece the Sixers truly lack, and there aren’t many other players on Lowry’s level who are even theoretically available.  [The Ringer]

Saying Lowry would fit in well here is stating the obvious. He would fit in well on basically any team in the league — he's an excellent facilitator who can excel on the ball but doesn't need to dominate possession, a hard-nosed defender whose acting chops help draw foul calls, and a fearless, if a sometimes inconsistent shooter who can help you space the floor. I don't know if there's any one skill of Lowry's that is singularly great, but he's good at so many different things that he can overcome bad nights in one area by making up for it in another.

Year-to-year, Lowry's outside shooting waxes and wanes, but he's in the midst of one of his good years this season, knocking down 38 percent of his catch-and-shoot looks and 40 percent of his pull-up threes. His equity as an off-the-dribble shooter would be a major reason to go after him. While the Sixers have players who are capable pull-up shooters, they fall well short on volume comparatively. As a team, the Sixers only attempt 5.9 pull-up threes per game, compared to 3.4 for Lowry by himself in Toronto.

That's a type of pressure the Sixers fail to put on opponents, and while it's a secondary concern right now, it will simplify coverage choices when they're up against a team in a seven-game series. Generally speaking, Lowry's pick-and-roll ability is also lightyears ahead of anybody on the roster right now, which is an area Philly has to be better in come playoff time. In late-clock situations, having a guy like Lowry who can use a screen to find a small window of separation can be the difference between a decent look and a turnover.

Following a hot start to the year, Philadelphia's bench has been one of the stories of the last few weeks. Doc Rivers has called for patience, believing it takes a while for second units to show their true colors during a season, but their ineffectiveness has put unnecessary strain on the starting group. The Sixers are forced to make brutal trade-offs for almost every bench decision right now. Matisse Thybulle has been terrific defensively but depresses spacing so much that teams can throw painless double teams at Joel Embiid or wall Ben Simmons off from the paint. Their bench shooters (primarily Furkan Korkmaz) are one-dimensional on their best days and completely useless on their worst.

The beauty of acquiring Lowry is that you'd have a lot more lineup flexibility, even if that seems counterintuitive in a trade for a small-ish guard. But he's just more dangerous than the guards they have on hand. Lowry can be the catch-and-shoot outlet on a post touch for Embiid, the ballhandler for a pick-and-roll with Simmons, the playmaker who creates more open shots, and the lead guard defender who could help with their leaky perimeter defense outside of Simmons. He would be a nailed-on starter for Philly, but the more profound effect is on that second unit, where Rivers would have a lot of flexibility to try different things night-to-night.

In a game against a team with a loaded frontcourt, for example, Lowry could be attached to Embiid's minutes, offering a high-level sidekick to Embiid in bench minutes where he already tends to kill opponents. On a night where they need a curveball, Lowry defending from the front in a small-ball look built around Simmons gives that group a better chance to succeed on defense and another playmaker on offense. Hell, if Rivers decided not to stagger Simmons and Embiid the rest of the year, Lowry is a better bet to run those bench-heavy looks, and a Lowry-Milton-Thybulle-TBD stretch four-Howard grouping would have a better chance to succeed on offense than any lineup with the Simmons-Thybulle-Howard spacing nightmare.

The sales pitch sounds great. What's the catch? It's the first and perhaps most important question: is Lowry really available at all?

Smoke began to rise after a brutal start for the Raptors, the assumption being that Masai Ujiri would attempt to deal Lowry in the final year of his deal in order to accelerate their rebuild/retooling. Toronto has since gone on a sensational run, finally passing the .500 mark with their win over Philly on Sunday evening.

To a lot of other franchises, dealing 34-year-old Kyle Lowry in the final year of his contract on a team that probably can't contend would sound like a no-brainer. But he is a franchise legend for a young Raptors franchise, the leader during their longest sustained run of success, and one of the most important players in their first-ever title. Independent of their fortunes this season, Toronto could simply decide they want to try to hang on to a guy who is beloved amongst their fans, especially since they have to spend this season playing in Tampa Bay instead of Toronto, robbing their fans of seeing him down the home stretch of his career.

Let's just assume he's available and boil this conversation down to the cost. Danny Green would basically have to be in the deal for salary purposes unless you're swapping him for Ben Simmons or Tobias Harris, which mostly defeats the purpose of trading for Lowry in the first place. Assuming salary flotsam gets tossed in (with apologies to Mike Scott and Terrance Ferguson), that still leaves Philly in a position where they need to add actual value to the deal. If you're asking me, it seems this deal is only going down if the Sixers are willing to part with Tyrese Maxey and/or a first-round pick.

Depending on how you view Maxey, that's a steep cost for a guy who could be here for a few months and then hit the road to play for someone else. The Sixers already pushed back with force at the idea that they would include Tyrese Maxey in a deal for freaking James Harden, who is absolutely tearing the league up right now. But that was when it was a package that was set to include Ben Simmons and more, not centered around Maxey's value by himself.

The reality is that Maxey is the only young-ish player on the Sixers you can sell as a two-way upside piece. Matisse Thybulle would need a dramatic transformation to be anything more than a defensive specialist long-term, and while he could be a great one of those — Embiid said recently he thinks Thybulle could win DPOY one day — he's the sort of player who is more valuable to a team that already has pieces in place, not one in search of players to jumpstart their next era of basketball. If the Raptors decide to move on from Lowry, it stands to reason they're not in need of immediately impactful role players, especially when you consider how well they've produced those over the years.

On Philly's end, it's a simple fork in the road moment. Perhaps the brain trust thinks they don't have enough and aren't far enough along to really go for it this season, betting on Brooklyn's short-term focus to doom them in the end. They billed this as a feel-out season when the new regime took over in the offseason, and opting for minor tinkering around Embiid and Simmons could be plenty impactful. We've already seen how much better those two can be by simply putting shooters in the lineup with them.

But there's been little indication they are thinking that way, and I think Daryl Morey and Doc Rivers would not pass up the chance to boost the team to real-deal contender status, especially if they can do it without having to move any of their three best players to make it happen. That doesn't mean a deal would come without risk. Lowry has avoided major injuries for most of his career, but he has missed extended time for various issues in three of the last four seasons, and undersized guards are dicey bets as they age no matter how talented/productive they are.

A Philadelphia return for Lowry is one of the few realistic yet impactful moves the Sixers might be able to pull off between now and late March. We'll see if they believe in this group enough to go for it.