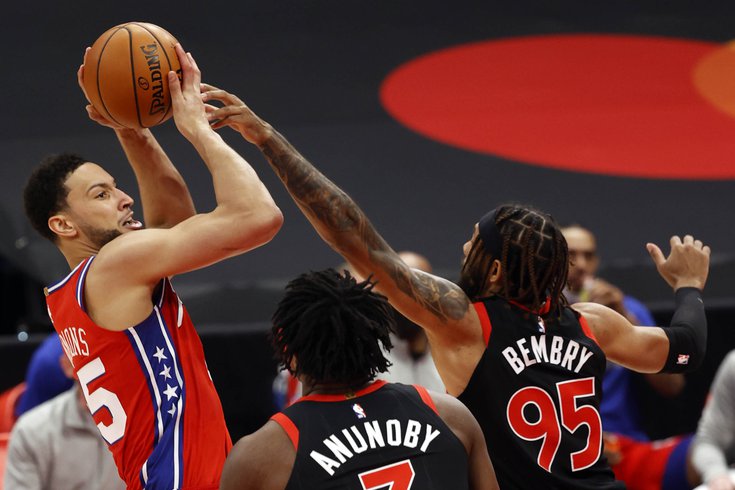 The Sixers got Ben Simmons and Shake Milton back in the lineup Sunday, but woeful shooting and an up-and-down night for Joel Embiid cost them in a 110-103 loss to the Raptors.

• The Sixers could have been thrown off-kilter by the Raptors to start Sunday's game, with Toronto choosing to go to a small lineup as a counter to Philly's size. So much for that plan — Ben Simmons went full throttle from the jump, and the Raptors were forced to bring Aron Baynes in the game to play a more "traditional" lineup rather quickly.

Simmons was the bigger surprise, fresh off of a two-game absence due to illness. He showed no lingering effects from the layoff, using stops he created himself on defense to push the pace early, and he forced the Raptors to foul him with aggressive takes to the rim. He had eight free-throw attempts by the time halftime rolled around, which is a big number for a lot of full games Simmons has appeared in, and he added to that number in the second half.

The change in mentality over the last few weeks has been noticeable, and while he did not have the same 40+ point explosion that we saw against Utah last week, this game was arguably more encouraging, because he was able and willing to hunt for his looks despite having Embiid alongside him and in the paint. He claims to have focused a lot of energy on the mental side of the game, and the free-throw uptick suggests that work is paying dividends.

We're starting to see Simmons approach the ideal version of himself, maintaining his standout defensive levels while leveraging his physicality on offense better than he has at almost any time in his career (outside of last January). The change has been relatively simple in terms of execution — Simmons is just looking for his shot more in spots he was already getting to — but the impact has been profound.

• Rookie Isaiah Joe got the nod in the rotation over Furkan Korkmaz, and I think you could justify giving him at least the games through the All-Star break to see what he's got. The most encouraging sign is that he has been a competent defender in year one in spite of some obvious physical limitations due to his frame. Joe does a nice job sliding through traffic, reading where he needs to get to, and he has been far better tracking both his man and the ball while away from the play than most rookies manage.

As a general note on the rotation, Rivers finally made the switch to actively stagger his two best players. If not for the Embiid-led lineups bleeding points on Sunday (quite a change from the normal state of affairs), it would have been the first positive data point for a change many have begged for. They should continue to roll with it, because the all-bench group is drawing dead now and will only look worse come playoff time.

I believe the saying goes something like... trust the process?

• For a lot of this night, I thought Joel Embiid was better than his stats suggested, partially because his teammates did a poor job of taking advantage of the open looks he created for them. Toronto sent waves of pressure and hard doubles at Embiid throughout the first half, and I thought he had one of his better halves of passing despite logging just one assist. He sprayed passes all over the floor — crosscourt to the corner, tap passes out of the post — and his shooters either didn't cash in or refused to take the open look in the first place.

Over time, however, Toronto's defense eventually wore on the big guy, and he reverted to some bad habits that he has managed to avoid for a lot of this season. Rather than trusting his teammates to make shots (no easy task on a night where they stunk), Embiid began forcing up shots and trying to dribble through traffic too much. It was a cold shooting night to boot, and with those nights few and far between this year, that's not worth losing sleep over.

Even still, I don't need to tell you how important the double management is, and how we can still see silver linings during a bad night. It's critical that Embiid is able to punish doubles from different spots on the floor, hitting home run passes himself so that they're not reliant on chaining together swing passes to get the eventual open three. As we saw at times with Toronto, good defensive groups can put out fires quicker, and if you aren't making passes that actively strain defenders, they'll eventually force you to reset.

The Sixers are going to see a lot of defenses like this one down the road. If the choice is between living and dying with single-coverage defense or forcing the ball out of his hands with doubles, that's an easy decision for opponents. It bodes well for the future that he already looks this good dealing with pressure when you consider how much of an adventure it was in years past.

Unfortunately, he had his worst shooting performance of the year, which wiped out a lot of the good things he did. That's the way the game goes sometimes, even if you're fresh off of a 50-point night.

• Schematically, there were a whole lot of letdowns and misreads made on the defensive side of the ball for Philly. Embiid was visibly upset on multiple occasions Sunday because guys did not make the rotation he thought they should have, and that often ended with a wide-open three for Toronto. They have a lot of guys who can punish you when you aren't committed to the closeout, and it allowed the Raptors to overcome double-digit Sixers leads in both halves.

Embiid was not without blame on the defensive side of the ball. Though he had 5-10 standout plays as a rim protector against Toronto, he was also the victim of some good work in the pick-and-roll by Fred Van Vleet, with Aron Baynes coasting for layups after Embiid got caught too high up. It's an area where he's still feeling things out after spending his entire career to date in drop coverage.

(By the way, Dwight Howard should probably read the scouting report before next game. You can't play drop against Chris Boucher.)

• It was Matisse Thybulle's turn to ride the seesaw on Sunday night, with the second-year wing putting up a stinker after an extended run of positive basketball. A little difficult to get too upset when you consider how important he has been off of the bench lately, but it was ugly for him all the same.

There was a bit of "Chicken or the egg?" with his gruesome plus/minus. On the one hand, Thybulle was the victim of Embiid's worst possessions on the offensive end of the floor, with Toronto hitting a lot of open threes that came as a result of bad post-up attempts and ill-advised midrange shots. On the other hand, part of the reason Embiid hoisted tough shots and turned the ball over is that the Raptors were empowered to send additional pressure at Embiid whenever Thybulle was on the floor.

Teams simply do not care if he gets open shots right now, and that has the potential to kill his viability completely come playoff time. When he is not sensational on defense, he doesn't offer much.

• You can't fault the Sixers for their three-point volume on Sunday, which is an improvement over a lot of recent games, but good lord this team has wild swings in quality from deep. Their hot and cold streaks appear to be in lockstep a lot of the time, and the first half was a miserable, icy run from beyond the arc.

Philadelphia's 4/17 mark from three in the first half felt like it oversold their ability to make shots. I would venture a guess that about 75 percent of their threes were absolutely wide open, and they often came from the hands of Philadelphia's best shooters — Seth Curry, Shake Milton, and Tobias Harris all went through stretches where they couldn't buy one, though in Milton's case he would eventually bounce back in the second half.

As we've discussed throughout the year, taking them is half of the battle. Harris and Curry were the two worst offenders (which sounds crazy to say given their raw attempts totals), dribbling out of wide-open looks and bailing the Raptors out on multiple occasions. When you work hard to create space in the first place, you can't just hand it back to the opponent for no good reason. I'd rather see Harris shoot them out of a game than bleed the shot clock out.

• The overall scoring droughts were deadly for Philly on Sunday, shooting woes or not. You are not going to win many (if any!) games where you can't score a single bucket for seven-plus minutes.

• Danny Green commits at least one turnover a game where I have to question if he is playing in the same game as everybody else. The passes are thrown to somebody who is open in another dimension, I guess, because it certainly can't be this one.

• Doc Rivers wanted to go away from Furkan Korkmaz in the rotation on Sunday night, which I think is the right call, and rookie Isaiah Joe showed some nice flashes while he was in there. Unfortunately for Rivers, Matisse Thybulle found a way to pick up three fouls in about five minutes of first-half playing time, so Korkmaz was thrust back onto the court anyway.

It feels like Rivers could have played almost anyone else on the team, including an additional center, and gotten more out of the minutes he got from Korkmaz. His shots weren't close, his defensive reads were a complete disaster, and Joe is probably going to get an extended look if current trends hold.

• I don't have a clue what the officials were doing on Sunday evening. Guys were getting hammered and not drawing a whistle, only to get called for a cheap one at the other end of the floor, and then the dynamic would flip, leaving everybody upset and in a state of confusion as to how to approach the game.

Technically you're supposed to call things "by the book" as an official, but consistent application is the real key. As long as you make it clear that guys can or can't play physical, or establish a firm line they can't cross, players will settle into a rhythm. This game was a disjointed mess in large part because of the way it was called.

• There are losses worth overanalyzing and drawing long-term conclusions on. This just felt like a weird regular season game.