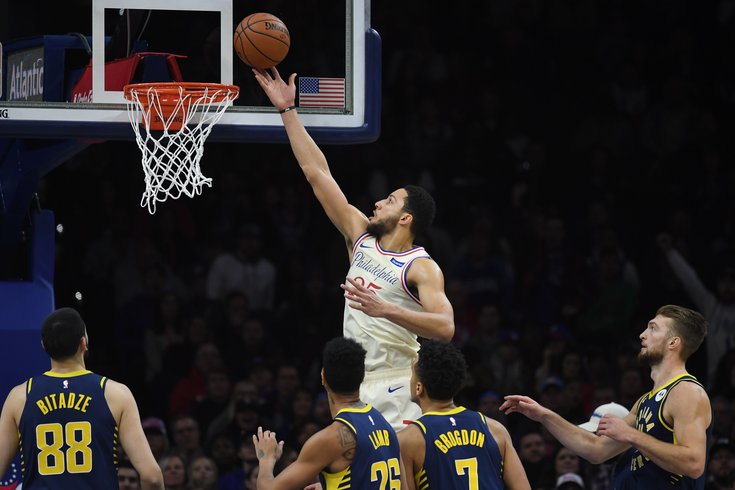 Philadelphia 76ers point guard Ben Simmons (25) attempts a shot during the during the first quarter against the Indiana Pacers at Wells Fargo Center.

The Sixers needed every bit of 48 minutes to outlast the Pacers in a back-to-back, but they emerged victorious once again, keeping their home record unblemished with a 119-116 win at the Wells Fargo Center.

Here's what I saw down on Saturday night.

• Probably the best Raul Neto performance we have seen in a week or two on Saturday night, not that he got a lot of burn. A lot of the ways you'd describe the returning T.J. McConnell apply to Philadelphia's current backup point guard — he competes hard on defense, he's more of a game manager type on offense, and he's generally going to make the right decisions on both sides of the court.

Back and forth we go on the point guard see-saw. We'll see where it lands by the time the games start getting real.

• Al Horford was in such a zone shooting on Saturday night that we actually got what I believe was a heat check three from the big man in the first half, a rare sight during a season where he just hasn't been able to get himself going.

If anything, I would have liked to see him featured more heavily in the minutes when Joel Embiid was off of the floor, even if he's not typically a guy you just dump the ball to and expect to carry the team on offense. Ride the hot hand, which Horford definitely had on Saturday night.

• I pick on Simmons a ton for not even trying to attack, and I think he made a concerted effort to get downhill and pressure the Pacers at the rim on Saturday night. That part is objectively good, and it's the sort of mentality they need him to come with every night. It was mirrored on the defensive end, where his effort level continues to be great on a night-to-night basis. He came up with a tremendous block in transition after a terrible Mike Scott turnover, his momentum carrying him into the crowd.

What a chase down block from Ben Simmons pic.twitter.com/vS8SQ0lfa5

This is how he should always be playing on both ends. Simmons is built like few guys in the league are, with a combination of size and speed that allows him to switch everywhere and should let him will himself to the line. We just rarely see the latter, and it was a welcome sight on Saturday.

Unfortunately, it was also one of those games where Simmons' finishing touch was just absolutely horrendous, with Simmons pairing some five-dollar moves with five-cent finishes. But if he keeps playing like this night-to-night, those results will tilt in his favor. The approach is more important.

Defensively, he was as good as it gets. Simmons stonewalled Myles Turner on post-ups multiple times on Saturday, with one ending in a 24-second violation for Indiana, and he was the man for the Sixers in crunch time.

He made Indiana feel him for 48 minutes, and as much as people like to ride Simmons for his offensive disappearances late in games, his late-game defense has been absolutely elite this season, with Simmons coming up with three huge plays down the stretch to ice the game. It is a huge reason they have emerged with so many wins late, and he deserves credit for that.

• Speaking of approach, I didn't wake up on Saturday morning expecting Embiid to even be available for this game. Back-to-backs are still a "wait and see" thing for the big man, and after playing over 35 minutes in New York on Friday night, at best I was expecting a bit of a sluggish Embiid.

But he came out firing against Indiana in the best way possible, attacking their talented frontcourt without getting too overzealous and losing sight of the floor around him. His reads out of the post are better than they have ever been, and though the Sixers' shooters aren't always rewarding him with makes on those pass-outs, his approach has improved considerably between this season and last. He has been getting to the line a ton since the fiasco against Toronto, and he absolutely took Sabonis into the torture chamber on Saturday.

His aggression at the rim on defense got him in a bit of trouble when he clocked Sabonis in the first half, but in general, it was an inspired performance that he can build on, especially as he learns to navigate these back-to-backs. He wants to play as many games as possible, and there's no better way to build the case for more of them than to go out and kick ass when he plays in them.

• I don't know how many times I have to tell you guys, but James Ennis is a hooper. Deservedly got the minutes to close things out, and though he didn't have the same shooting touch as on Friday, he made some huge defensive plays down the stretch when it mattered.

• Tobias Harris was all set to be the scapegoat for a loss on Saturday night, having fouled T.J. Warren on a three-point attempt and turned the ball over on two crucial possessions in the final minute. But with a little help from Ben Simmons on defense — heck of a play from Simmons to get the steal, by the way — he flew down the floor and came up with the clincher.

Huge defensive play from Ben Simmons to give the Sixers the lead after a bad turnover. He continues to be awesome on defense pic.twitter.com/kTRJveEkKf

Just like with Simmons, there were some misses throughout the night that Harris would like to have back. But just like with Simmons, I like when Harris plays aggressively, and they really need him to get these reps now so that he's ready to play an important crunch-time role in the playoffs.

• In the interest of fairness after roasting Furkan Korkmaz's defense on Friday night, I must say he did a good job of playing ball denial defense early in the game, preventing Malcolm Brogdon from getting the ball in the first place. Unfortunately, he was only able to play that style of defense for so long, and he ended up giving up a bunch of buckets to Brogdon and T.J. Warren alike.

I don't think Matisse Thybulle was a whole lot better on defense, though, despite the difference between them on an average night. He got hung up on screens (which Indiana's bigs are admittedly good at setting) and allowed their guards to get downhill, which could be a product of trying to avoid the cheap fouls he has been getting hit for this season.

On the positive front with this duo, you can definitely tell Korkmaz's chemistry is growing with his teammates with increased minutes. That's especially important with Joel Embiid, as Korkmaz has been able to successfully run some two-man game with the franchise center. Embiid deserves a lot of the credit for his improved reads out of double teams, but getting on the same page with Korkmaz and Co. has been a difference-maker for sure.

• Mike Scott has had a dreadful week shooting the basketball, and when he is in a funk like this, I'm not sure the answer is to keep letting him try to shoot himself out of it. They have wings they can play instead, and Harris can slide up to the power forward spot and give you minutes there. You don't have to keep him out there, especially because he's not exactly bringing a lot of defensive value to the team. He's not going to be ruined by a game off.

On the positive side, one thing I think he's gotten very good at doing is changing the angle for passes on post-ups by cutting into the unoccupied territory between the arc and the paint. There have been a bunch of times when the initial look for Embiid isn't there, only for Scott to get to a spot and throw a low bounce pass to the big man from another angle, negating the good defense of the opponent. On a team where the post-up is so critical, this is a hugely important detail.

• The Sixers defense in transition was, shall we say, not exactly up to par. There were far too many leak outs from the Pacers that were rewarded with easy layups at the other end. If a team is killing you that way, you either have to commit harder to getting back or really try to make up the difference on offensive rebounds, the latter of which is something the Sixers are built to do anyway.

• I continue to believe there's a better way for the Sixers to defend pick-and-rolls at times. Embiid is often excellent at preventing lobs being tossed over his head, and he holds up great when guards ISO him, but there are times when he can probably put a little more pressure on the ballhandler turning the corner. Nitpicking, but still room for improvement there.

• Letting a team score at will on you like Indy did for most of that game is definitely ugly, especially when they're on the second half of a back-to-back and played overtime the night before.

• Are we sure Malcolm Brogdon isn't the free agent the Sixers should have gone after this past summer? Boy would he have done basically everything they need on offense, while also being a pretty good defender in his own right.