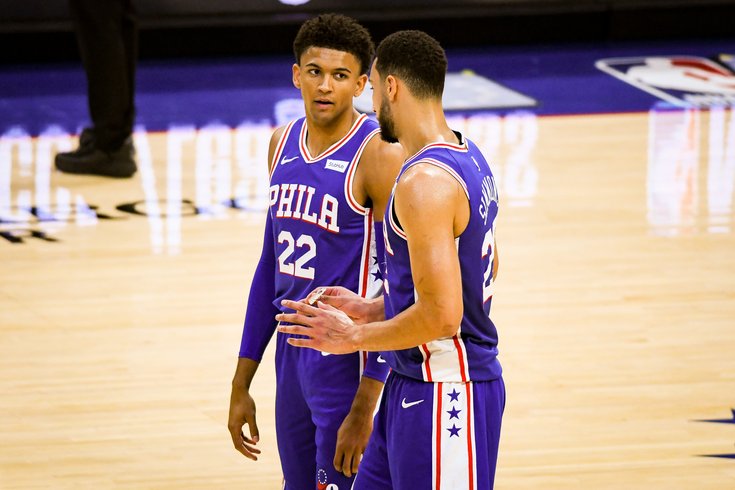 The Sixers looked well on their way to blowing an easy win during a second-quarter funk, but they would eventually turn things around for a win over the Kings, 97-91, thanks in part to a tremendous second half from Matisse Thybulle.

Here's what I saw on Wednesday night. Have a happy Thanksgiving, everyone.

• It took all of one possession for Joel Embiid to shake off the scoreless night he had in Toronto. Poor Richaun Holmes:

Credit to Holmes for going up and trying to make a play, but man is he at a disadvantage against Embiid on the block.

If Embiid had been able to sustain the urgency he played with throughout the game for the rest of the night, the Sixers really would have been onto something. The big man had a first-half double-double with 15 points and 11 rebounds, and around their franchise center, the Sixers moved the ball well, only failing to blow the game open in the first quarter because of some bad shooting from his teammates.

It should not take a goose egg against the Raptors to get these sort of starts from Embiid. He's not going to go through everybody as he goes through Holmes, but the mentality has to be the same every night and all night. That opening urgency returned at the end of the game with the Sixers' perimeter offense junking up, with Embiid demanding the ball in the paint and directing guys exactly where he wanted them to go.

I don't think it's fair to expect 30+ every night, because shots won't drop, but the approach is replicable every single game.

• Al Horford bailed the Sixers out of some pretty stagnant offensive sets on Wednesday night, though I suppose when you can post him up against guys like Richaun Holmes and Nemanja Bjelica, there are a lot worse options you could turn to.

Every so often this season, you're reminded Horford has had a pretty good career as one of the top options on his teams. He doesn't have anywhere near the same amount of freedom on this team, nor has he been particularly efficient this season, but he can go and get you a bucket every so often, which is nice.

• It is about time for Matisse Thybulle to get back into the rotation for real. He has not been given up on, but Brett Brown has only played him for short bursts over the last couple of weeks. With Furkan Korkmaz struggling to get anything going, the rookie should probably be given the chance to take the spot back.

After Brown yanked Korkmaz early in the third quarter, Thybulle had the best stretch we have seen from him in weeks, blocking a Buddy Hield three, dunking on the ensuing leak out, and then coming up with a couple of great effort plays on defense in the moments that followed. Even in a quieter first half, he had a much better time of it than he did in Toronto on Monday, avoiding cheap fouls and still playing solid defense.

(By the way, Hield is a pretty damn good offensive player, and Thybulle just absolutely destroyed him in the second half. Had absolutely no chance against him. It took some unbelievable shotmaking for Hield to score on him.)

Even without the pair of made threes in the third quarter, this would have been one of the best stretches of the season for the young man, but those certainly make a big difference. Thybulle is a guy who helps to amplify the team identity they want to play with, and that's perhaps the best case for boosting his minutes. Focus on what you can do well as a team, figure the rest out as you go.

If not for the presence of Embiid, he was the player of the game. Completely changed the momentum in the second half.

• Fans of Philadelphia, you do not have to settle for cheering Ben Simmons when he shoots terrible turnaround jumpers from 10-14 feet away. I understand seeing him shoot at all is cathartic, and it's one of the few ways he actually shows comfort shooting, but man, the pop in the arena when he made this jumper was just kinda sad.

That'll give 'em something to talk about at the dinner table. pic.twitter.com/dReat8lhHm

The bar should not be this low. I'm all for the crowd encouraging him to shoot, but do that for shots that don't require an insane degree of difficulty. He barely hit the rim on a similar shot a minute later with the crowd egging him on! Demand that he shoot threes and face-up jumpers, I'm with that, please none of this junk.

• The end of the second quarter is some of the worst, most disjointed basketball the Sixers have played all season, and that's really saying something. Turning the ball over out of a desire to move the ball is one thing, but the Sixers were giving the ball to the Kings mostly through pure laziness.

It was also one of the first times all year where we saw some visible frustration seep through. Simmons tried to throw a pass to Embiid posting and was visibly mad when Dewayne Dedmon fought through Embiid and ran in a breakaway slam by himself. Minutes later, none of the other four Sixers came back to help Simmons with the inbounds after a made shot from the Kings, and the fans let the whole team have it with a cascade of boos.

(Were it any other two players, it would fade into obscurity rather quickly, but anytime frustration bubbles up between Embiid and Simmons, that's worth keeping an eye on.)

On the coaching side, Brett Brown called a timeout in the middle of it, but that didn't feel strong enough, and maybe that's the problem here. It was a bad enough stretch of basketball that every guy on the court should have been sent to the bench to close out the half instead, but Brown left them all in to stew on it, and things didn't get much better before halftime. Only a late Raul Neto sub and make at the halftime buzzer saved them from trailing at halftime.

I'm not sure why it's so hard for this team to string together comprehensive performances. They came out at the start of the game and looked great, playing some inspired two-way basketball. A team that wants to win a championship has no business letting it devolve in that fashion.

• That is, without hyperbole, the worst I have ever seen Mike Scott look as a shooter. He just wasn't even coming close to making shots on Wednesday night. Two airballs in a game for anybody is pretty rare, let alone a guy who is a good shooter.

He wasn't the only guy who couldn't get going. If Philadelphia's shooters had been even average on Wednesday night, this game is a blowout. They still walked away with a relatively comfortable win, but they shouldn't have had to sweat it out until late in the fourth.

• Tobias Harris has been very good for the last couple of weeks, including in ways most people wouldn't have anticipated before the season started. He has been one of the nice surprises of the year on defense, and he continued to look improved there on Wednesday, adding some blocked shots to the help defense and takeaways he has contributed all season.

But man, did he stink in the fourth quarter. The Sixers would have put the game away with time to spare if he had proven capable of knocking down an open three, but he was falling all over himself.

• Furkan Korkmaz coming out to start the third quarter definitely qualifies here, both because Korkmaz was terrible and it meant something was wrong with Josh Richardson.

Richardson evidently had tightness in his right hamstring, and the team ruled him out for the rest of the game fairly early in the second half. We haven't received word yet on the possible severity or the outlook for Richardson, but we will keep you informed if and when we learn more.

• I was particularly inspired by one man in attendance on Wednesday night, who heartily booed Nemanja Bjelica every single time there was an opportunity to do so. There was a contingent of fans who booed him every time he checked in, but this guy went above and beyond, making sure the could-have-been Sixers player got an earful whenever he touched the ball. Keep that same energy, as the kids say.

For those who need a refresher, Bjelica agreed to a deal with the Sixers before making up a story about a faulty work visa and claiming he was going to play overseas last season, only to almost immediately sign a lucrative deal in free agency with the Sacramento Kings.

Would I have done the same thing for much more money? 100 percent. But at least don't hide behind such a B.S. explanation!