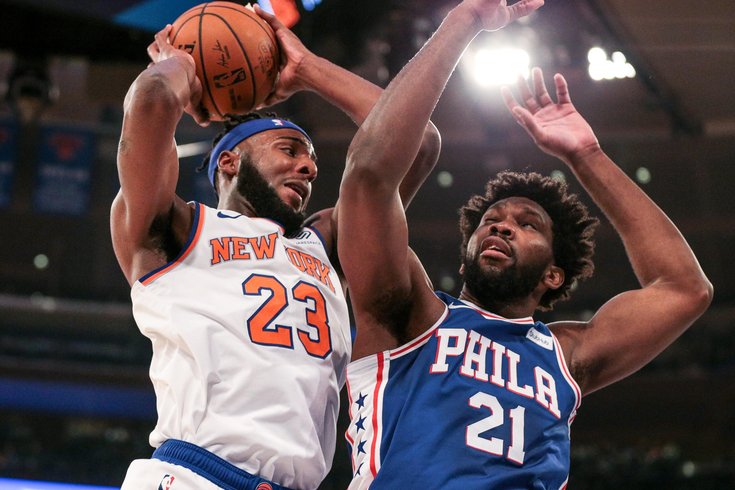 Joel Embiid played bully ball in the paint in the Sixers' most recent win.

The Sixers sure love to dig themselves holes against the Knicks, but after sputtering through the first half, Philadelphia came alive once again to get a win on the road without two of their starters, fighting off New York for a 101-95 victory.

Here's what I saw Friday night.

• I have advised players to keep their heads down and avoid the poster in this space previously, but I admire Norvel Pelle's willingness to put himself in the line of fire to try to block shots at the rim. In his first minute of NBA action, Julius Randle threw a hellacious dunk down on Pelle's head, and rather than backing down from the challenge, he just kept coming, producing a pair of blocks on similar attempts and picking up a questionable foul on a lob tossed to Mitchell Robinson.

His teammates were often leaving him hung out to dry on the back end, so he deserves his props for trying to bail them out. They could use a little more of that youthful energy, even if I think some of his blocks are the result of Pelle not reading the game as quickly as he should. On a team that looks like it's playing in quicksand from time-to-time, a spark is nice, even if it's mostly just raw energy right now.

• I've gotten on Tobias Harris' case at times this year for floating through games on offense or not shooting well enough to be worth $180 million, but he has been the guy who has often shown the fight to get the team back in games by any means necessary. He was their offensive leader in the third-quarter push that got them back in the game, slowly but steadily working his way to the mid-post to set up shop.

The shame of Philadelphia's post-centric play centered around Joel Embiid and Ben Simmons is that Harris capable of doing serious damage down there. He's a good shotmaker from all angles who punishes smaller matchups, he just needs more of those opportunities, as far as I see it.

• I have said this before, and I will say it again, James Ennis should be the spot starter when the Sixers need a wing to fill in. Furkan Korkmaz being able to dribble and occasionally score in the in-between game does not make up for the significant gap on defense, and since Ennis is a decent shooter in his own right, this is no contest for me.

Time and time again, Ennis has come up large for the Sixers off of the bench this year, so I guess the case for Brett Brown is wanting to keep him in that sub role so his role and pairings with other players are consistent. I don't think that's a particularly inspiring case, though. Play the guy more who gives you a better chance to win, at the start of the game, in the middle of the game, and at the end of the game.

So about his performance against the Knicks — Ennis was a huge part of Philadelphia's second-half turnaround, doing all the little things he does on a nightly basis. He has been one of the league's most prolific shooters from the corners this season (he had plenty of practice there with the Houston Rockets) and his effort pops in tangible ways on both ends, either through offensive rebounds or drawing charges with good positioning.

• Joel Embiid did not have the best night from the field against New York, but one thing I liked about his night was his desire to mix it up inside and will himself to the line. He has the size and strength to put guys on his backside and force them to pick up fouls, it's just a matter of committing to getting down the floor and sealing his man off.

That is what bully ball looks like. You aren't going to get dunks and layups every time you go down there, but you're putting pressure on the opponent. The Sixers should not be out looking to turn Embiid into some relic from the past, and they should absolutely lean into his other skills, but nights like these should be a huge point of emphasis on tape. Embiid refused to be denied his spots in the paint, and it helped him survive (and at times thrive) on a night where his touch was off.

Use the natural gifts at your disposal, big fella.

• We'll discuss some of the problems with Ben Simmons and the offensive fit below, but he continues to bring his A-game on defense following a breakout effort against the Knicks back in Philadelphia. He's versatile as hell and makes big plays in big spots on that end of the floor, which unfortunately gets overshadowed (with good reason!) by the other side.

• Korkmaz is not the reason the Sixers have underwhelmed so far this season, though he is emblematic of some of their issues behind the core. You can understand why he is being given a chance to stick in the rotation, while also being highly skeptical that playing him now is accomplishing anything for their long-term goals.

It is one thing to expect guys to progress from below-average to passable on defense, provided they bring a necessary offensive skill to the table. But when teams like the Knicks can point to you on an advanced scouting report and say, "We are going to attack that guy every time we can," expecting someone to stick in the rotation when the games matter is just foolish. Better teams will absolutely eat him alive, and on top of getting blown through by bigger players like R.J. Barrett and Julius Randle, Korkmaz also made some head-scratching decisions on rotations on Friday night, making matters even worse.

I am not a big Zhaire Smith believer for this season, as I think he is an athlete playing basketball and not much of a basketball player yet, but at the very least, Matisse Thybulle has to be given the biggest chance of the young wings to play and develop. There is hope the rookie can be a passable shooter. There is no hope that I see for Korkmaz to get where he needs to on defense.

Korkmaz would end up on the positive side of the ledger on Friday night, but that felt like a guy riding other peoples coattails above all else.

• Al Horford and Josh Richardson are very important players for the Sixers, and losing two starters is tough for any team. But it says something about the top end of this team that with two max-contract guys (and a third guy on a near-max) they can struggle so mightily for an entire half with the Knicks, a disaster of a team with no discernible team-building strategy.

Most of the topics we talk about with this team day-to-day are just window dressing for a fundamental problem — they are built around a post-up center and a 6'10" point guard who is very talented but ultimately is a problematic fit next to him on offense. It is hard for them to thrive at the same time unless somebody fundamentally alters how they play, and it's why they're prone to the periods of stagnation.

You end up in situations where Embiid has to hover around the perimeter for the sake of spacing the floor for Simmons, who isn't making much out of that space anyway. That was what happened throughout a lot of the first half on Friday. People get driven nuts watching Embiid attempt a lot of shots from deep, but in some cases, he doesn't even have much of a choice. Simmons dawdles with the ball and never thinks about an open shot, leaving it in Embiid's hands with time winding down on the shot clock.

(Late in games, the problems remain the same. Simmons still brings value to the table on defense and in transition, but in the slower pace halfcourt setting, a lot of the time he is just getting in the way. That doesn't show up in his box, but it is quite clear when things junk up.)

The bench players are often expected to be perfect with no flaws when it's the stars who are supposed to lift everyone up and protect the team from weaknesses elsewhere. It's hard to do that when they have to fight so hard to figure out how to make this work.

(Obligatory, "But just imagine if they do!")

• If Mike Scott's jumper decides to return sometime soon, I'm sure that would be helpful for Philly. Missing absolutely everything this week.

• There are a lot of people with their own pet theories about why the NBA's ratings are struggling, but when the first 1:10 of game time takes about 15 minutes following a timeout and a coach's challenge, it's not hard to figure out why anyone would have turned the game off. Good grief.