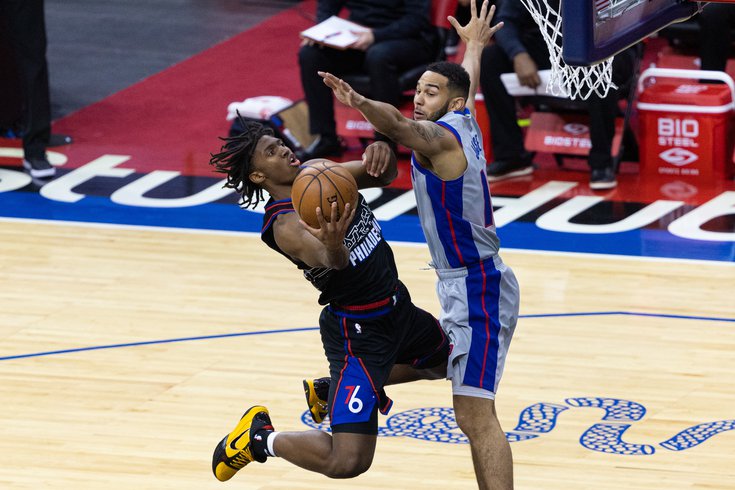 The Sixers won their eighth straight game with a 118-104 victory over the Pistons on Saturday night, moving ever so closer to locking down the No. 1 seed in the Eastern Conference. Joel Embiid led the way with 29 points, and strong efforts from Dwight Howard and Tyrese Maxey were among the standouts from the supporting cast.

• Is there a more forceful way to say someone's eyes lit up at the sight of something? Joel Embiid had to be staring in neon at the opportunity to go against former teammate Jahlil Okafor, one of the many helpless bigs Detroit threw at Philadelphia's franchise player on Saturday night. Despite all the money they spent on their frontcourt in the offseason, there was nothing they could do to stop Embiid from rolling.

Embiid's assortment of moves is deeper than ever this season, which is a big reason to have more confidence in the big guy as a No. 1 option against high-level teams in the postseason. When the paint is cut off, he can drop a one-legged fadeaway that's impossible for even the league's biggest players to block. Smaller centers are going to get thrown out of his way. Slow-footed players will get Euro-stepped around and embarrassed with face-ups from the left block. Good luck finding an answer for him, especially because he's passing up open threes to find shots closer to the rim this season.

Look, this is a game most people won't care too much about for good reason. Embiid stomping the tanking Pistons isn't worth too much time or attention. But even with some subpar opponents on the menu in the past, Embiid has had issues trying to produce in the second half of back-to-backs. After not being part of them for years, it's not a shocker that he hasn't been at his best in this setting, and a strong effort like the one we saw against Detroit is heartening for that reason.

• The Pistons are in a special tier of bad where you can get minutes for your young guys without worrying too much about how it will impact the result. Tyrese Maxey doesn't need to play bums to look good — he has played great basketball as of late — but the more minutes you can get for him as the regular season comes to a close, the better.

Maxey is playing a more natural brand of basketball than he was to start the year, even though he had some electric flashes in the opening months of the season. His passing used to be almost too quick, as if swinging the ball was something he thought a rookie should do instead of a product of his reads. Now, he's hunting his shot more and kicking it elsewhere only if it's going to get the team a better look. That's an important step for a kid who should hopefully be running a lot of offense down the road.

The biggest difference for Maxey now, as we've noted several times recently, is his tendency to get all the way to the rim instead of settling for runners and floaters. The in-between game is still part of the arsenal,  but it's an accessory rather than the sum total of his output. The version of Maxey who gets to the line and knocks down open threes is a major piece, and it's exciting to think about what he can accomplish with a full (and semi-normal) offseason to work on his game.

The opponent didn't offer the stiffest test, but Maxey also had one of his better games on the defensive side of the ball, with the rookie offering well-timed help to break up possessions. All of this feels interconnected. He has learned a lot this year from his on-court reps and certainly the teaching he's receiving from vets and coaches alike, and he's putting it to good use.

And hey, look at the young guy showing off his hops a little bit:

Outside of his leading-man effort against the Nuggets when they only had seven to suit up, this was Maxey's best game of the year. And given how complete it was, there's a strong argument this may have been an even better performance, with maturation shining through from beginning to end. Great night for him.

• Saturday night's game featured some of the most decisive basketball we've seen from Tobias Harris since his terrific start to the season. Without Ben Simmons around to push the pace, it was up to someone to lead the Sixers' offense with some pace and urgency. Harris was more than equipped for that job against the Pistons.

Unfortunately, Harris wasn't able to sustain the early groove he was in as the game wore on, but this wasn't an opponent that really warranted the guns blazing edition of Harris who has won them a lot of games with second-half barrages this year. He got the ball rolling for Philly, and that felt like enough.

• Playing a guy like Matisse Thybulle is demoralizing in a neutral situation, but it has to be especially brutal for players on teams like the Pistons. A lot of these guys are simply trying to make it to the end of the season unscathed so they can start fresh next year, and then you have to contend with an agile octopus who snatches your passes, your shots, and loose balls to turn a decent possession into a nightmare before you can react.

You can see it in the body language of guys when they are already 80 percent of the way through delivering a pass to a teammate, their shoulders dropping when they realize Thybulle is about to burst through and go the other way. He had three steals in his first stint on the floor, providing a big spark to help Philly set the tone and maintain a lead for the rest of the evening.

• You know the fanbase has taken to a player when even their mistakes are celebrated by the home crowd. After Dwight Howard canned a late-clock three from the corner in the third quarter, he was able to earn some cheers from the home fans for an airball as the third quarter clock wound down.

When a guy plays as hard (and as well) as Howard has for Philly most of this year, who can blame the fans for getting behind him? Once again, he was a force on the glass against the Pistons, dominating the rebound battle basically by himself. There were a few possessions where he seemed to think he deserved a better whistle, too, something you could hear loud and clear as he barked at the officials from within a tangle of limbs.

I was cautiously optimistic about what Howard would bring to this team when Philly signed him, but he has exceeded expectations by a good deal. He brings something on and off the floor, and he has made it easy to overlook his more maddening tendencies.

• I am officially on the "Philadelphia should be worried about Shake Milton as a playoff contributor" bandwagon. Relying on him to be a lead decision-maker for the bench unit has gone poorly all year, and though I think the smaller looks they've used recently are beneficial for him, I don't know how much it'll matter if he's asked to be the guy for that group. The longer George Hill is here and still sort of lurks in the background, the more concerned I am that nothing is going to change. That's how it usually is for Doc Rivers teams — what you see is what you get, for better or for worse.

If the all-bench group is relied on in the playoffs, and we've been given no reason to believe it won't be, there will be a lot of eyes on what Milton does as the leader of that group on offense. No pressure.

• There are two primary goals in a game of this nature late in the season: get the win and get out without any injuries. Philly didn't add anything major in the Pistons game, but there were some definite heart-in-mouth moments for Sixers fans.

The first came with Matisse Thybulle diving to the ground for a loose ball, his left hand getting caught under Jerami Grant's foot as both guys went crashing down. Thybulle retreated to the locker room but would return pretty quickly, offering some relief to the adoring public.

There was not one specific "oh shit!" moment for Embiid by comparison, but he did not appear to be moving particularly well toward the end of his third-quarter stint, his knee buckling on one play before he hit the floor again about a minute later, which was apparently enough for the Sixers to pull him from the game for one reason or another.

Overall, the Sixers did a good job of managing Embiid in this one, keeping his workload to 23 minutes even with two starters out of the lineup. Perhaps one day it'll be less terrifying to see him wincing and grabbing his knee. It wasn't this one.