Also, can Ben Simmons snag Defensive Player of the Year? 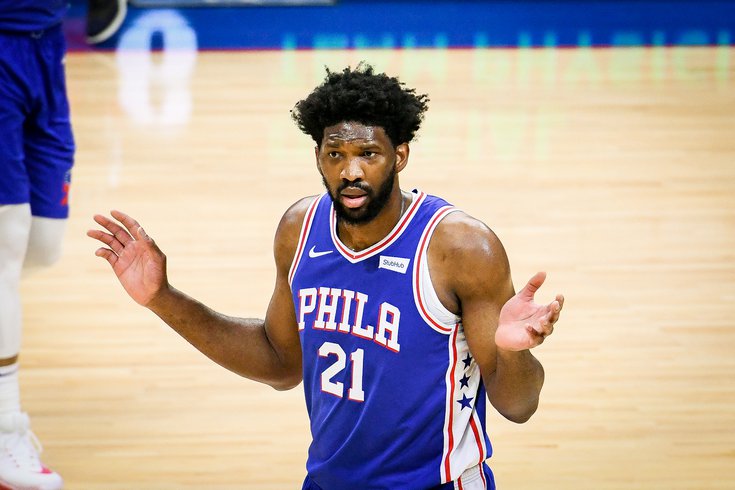 PHILADELPHIA, PA- JANUARY 04: Philadelphia 76ers center Joel Embiid #21 looks on during the game against the Charlotte Hornets at Wells Fargo Center on January 04, 2021 in Philadelphia, Pennsylvania.

The Sixers are in first place in the Eastern Conference and are about as healthy as an NBA team can be in the month of May.

They have candidates to win awards and make All-NBA teams, as well as the talent to contend for an NBA title.

So what are the sports books and analytics models saying about their likeliness of hoisting the Larry O'Brien Trophy this summer, as well as winning some other accolades?

Remember, sports books are trying to make money more than they are trying to accurately predict which team will win, which explains a little of why a team like the Lakers has better NBA title odds — by a considerable margin — than the Sixers do. Still, if you think Philly has a real shot at winning it all, the price is certainly right.

Here's the current title odds according to two websites, BetMGM and DraftKings, via Pickswise:

To help illustrate how betting odds handicappers are evaluating the NBA's landscape of contenders, looking at another model, this one from the statistical website FiveThirtyEight, has the Sixers in a much more dominant position.

Their model gives Philly a 22% chance of making and winning the NBA Finals, second only to the Clippers with 23%. They also award Philly with the highest percentage by far of likeliness to make the Finals at 43%, with their most likely opponent being the Clippers at 36% or the Jazz at 28%.

From a pure value perspective, making a stab at the Sixers to win it all might be a lucrative move.

The prevailing thought across the league seems to be that Joel Embiid is probably better this season than Nikola Jokic, but has missed too many games (with him likely to miss one or two more down the stretch as the Sixers prioritize health over hardware) to win the MVP.

But the award is voted on by NBA writers, not by sports books (which have Embiid trailing Jokic by a large margin) or by statistical projections.

According to Pickswise, Embiid is the only player besides Jokic with a realistic chance of winning the storied award.

Turning to Basketball Reference, Jokic has a 63.2% chance of being the MVP, with Antetokounmpo at 10.1% and Embiid at 9.3%. You can decide which player is most deserving yourself:

Defensive player of the year

The most likely award to land in Philly might be the Defensive Player of the Year trophy, which currently seems like it is Ben Simmons' to lose.

Over at NBA.com, their staff does a weekly "ladder" ranking the best defenders in the NBA, and in their latest version this week, Simmons is at the top:

Simmons’ offensive game has been generating some chatter since he returned to the Sixers’ lineup on April 26. That includes his game-winning tip-in to beat San Antonio in overtime Sunday, and the fact he’s hitting 72.2% with his carefully limited shooting repertoire in five games back. But the part of his game that has him atop these rankings did not go unattended. Simmons drew a pair of late charging calls in OT against the Spurs’ Keldon Johnson. “Biggest plays of the game,” Philadelphia coach Doc Rivers called them. [NBA.com]

For what it's worth, the website has Matisse Thybulle at No. 5 (!), and Embiid ranked eighth.

Here's how the oddsmakers see it panning out defensively, according to BetMGM, via Pickswise:

Perhaps Gobert gets the substantially higher odds based on his track record of winning this award? He is second on NBA.com's ladder.

With seven games left for the Sixers before the start of the playoffs, it will be interesting to see how much their stars get to play, as they seek to lock up the No. 1 seed in the East and start the postseason at full strength.