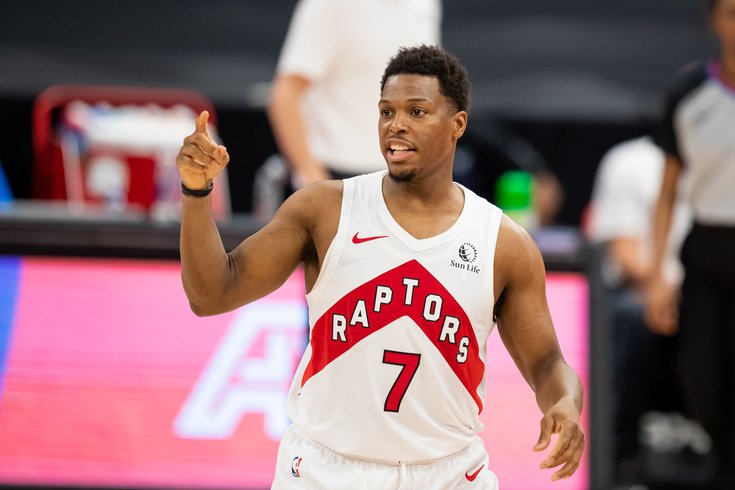 The Sixers were a heavy suitor for Kyle Lowry at the NBA trade deadline, and they remain interested in a partnership with Lowry down the road, according to a new report from Sam Amick and John Hollinger at The Athletic.

In an exercise breaking down the top free-agent targets of the 2021 offseason and the interest they've drawn around the league, the duo eventually got to Lowry, who recently turned 35 but still remains a relatively hot commodity for teams looking to add one more impact piece. And if you were in the camp of people who wanted to see a deal done at the deadline, some good news is on the way. Amick believes Philadelphia is still interested in a sign-and-trade possibility:

Lowry not getting traded at the March 25 deadline was quite a surprise, but it wasn’t for lack of trying on the part of the Toronto front office. But as team president Masai Ujiri made clear back then, the Raptors still have an incredibly high opinion of Lowry and his game that — as they saw it — wasn’t properly reflected in the offers that came their way. Yet among the three teams known to be in hot pursuit of Lowry back then — the Lakers, Miami and Philadelphia — only the Heat are in a financial position to possibly sign Lowry outright this summer.

Sources say the Sixers still plan on pursuing him by way of a possible sign-and-trade. While they added George Hill at the deadline in lieu of Lowry, only $1.2 million of his $10 million salary for next season is guaranteed, and the deal expires at that point. The Lowry interest remains very strong there.  [The Athletic]

The calculus for all parties is different in the offseason than it was heading into the deadline. For starters, a lot of the upfront trade value for Lowry was built on the idea that you would get him to bolster a potential Finals run in 2020 and then most likely overpay him a bit for a couple more years of productivity at the tail end of his career. Paying a premium to get him during a year where he has still been productive and effective is understandable for a team that believes it's in a position to compete with the best of the best.

Is the same motivation justified in the offseason? There are numerous reasons to say no. A sign-and-trade deal requires some finesse to make happen on the salary front, and perhaps more importantly, it would hard cap the Sixers at the tax apron. Next year's numbers are still estimates for the time being, but this year's team was already over the 2020-21 apron number of around $138 million. Barring a pretty significant cap jump — unlikely given the impact of COVID on league financials — it would be difficult to construct a Lowry sign-and-trade that would also find them under the apron without trading one of their current top three to make it happen.

(If the Sixers fall flat on their face in the playoffs, perhaps that sort of move becomes part of the discussion. But if Philly is moving one of their lead trio, a Lowry acquisition feels like it would be one part of a bigger trade or series of trades, because subbing him in for anyone in the top three just makes them older without swinging their title odds.)

Broadly speaking, I'm a bit more skeptical of Lowry interest in the offseason compared to the deadline. Speaking with people around the team and the league, one reason the Sixers downplayed interest at the deadline was because of their desire to remain in the mix for future possibilities that weren't available yet. Any trade that requires them to send combinations of young players and picks diminishes the haul they could send for, as one example, Washington's Bradley Beal. Given that they lost the ability to make a run with Lowry this season, my guess would be that the Sixers aren't going to suddenly up their offer to Toronto's liking in the offseason.

Maybe that's a moot point — any offer that provides the Raptors with some value in return is superior to the Heat outright signing Lowry and Toronto being left holding the bag. Even still, the financial and bigger picture questions will likely give Philly pause. And then there's the million dollar question: how much on-court value will Lowry provide beyond this season?

On a Sixers team with minimal changes to the roster? Plenty, in theory. All the superlatives used to describe him as a pick-and-roll playmaker, pull-up shooter, and overall leader will remain true during his year 35 and 36 seasons, offering the Sixers a very real title window even with superteams coming together in both conferences. Lowry would give the Sixers an absurd amount of star combinations to play with in lineups, take pressure off of Ben Simmons as an initiator, find easier baskets for Joel Embiid and Tobias Harris, and so forth.

Still, small-ish guards in their mid-to-late 30s are always a bit dicey to bet on. Chris Paul has proved the exception to that rule with an excellent resurgence over the last two seasons, dismissing any concerns about his pricey contract by propelling rebuilding teams into real-deal playoff outfits. Athletes in all sports are remaining effective for longer than ever thanks to modern training methods. But injury risk deep in one's career will always be a consideration, and being the team to bet on Lowry during his next contract is at least a small gamble.

Say this about Daryl Morey, Doc Rivers and the rest of the brain trust — if they don't win a title this season, you can feel pretty confident they will be aggressive pursuing players who bring them closer to one. Lowry qualifies in that category, but it won't be easy to make something work.