Report: Sixers believed there was 'traction' on Chris Paul trade in offseason, but Paul wanted elsewhere 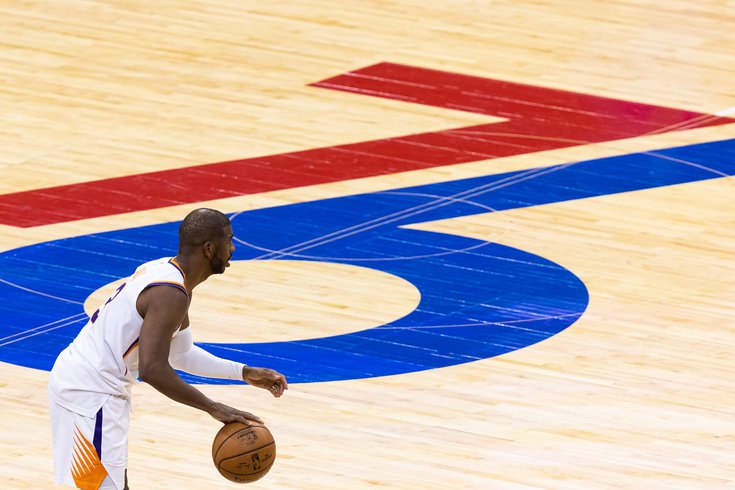 Thought Sixers trade rumors were over and done with after the NBA trade deadline passed? Think again. There's always room for the rumor mill in NBA discussions, and this time we're looking backward at a Chris Paul deal that never came to fruition for the Sixers.

Profiled by Sam Amick of The Athletic, Paul has been part of a Suns renaissance in Phoenix, helping to legitimize a franchise that hasn't made the playoffs in over a decade. Nestled within that story is a detail about the Paul sweepstakes last offseason, where the Sixers reportedly played a small role in the festivities:

As Jones remembers it, the deal came together quickly. Never mind that nearly three months had passed since Paul had shared his digital send-off. Sources say Paul was a driving force behind the deal, and the Thunder — who had prioritized Westbrook’s desire to get to Houston above all else when Paul first came their way — were willing to send him to a destination of his choosing even if it meant they got a little less back in return. His professionalism, his play and the mentorship that would help the Thunder’s young players as they moved forward had earned him that much.

Ironically, sources say Philadelphia — with Morey having taken over the Sixers’ front office just weeks before Paul was sent to the Suns, and his former Clippers coach, Doc Rivers, part of their program too — made a spirited push to land Paul. The Sixers even believed there was some traction on a possible deal. The interest from Paul, however, was not mutual. With Paul targeting Phoenix as the best fit professionally and personally, and Presti in a much-improved negotiating position because of the way Paul had played, the Suns had won the CP sweepstakes. [The Athletic]

Paul not wanting to come to Philadelphia is easy to understand on the surface even without doing any sort of additional reporting. Though Doc Rivers noted last September that the two men had put their differences aside, they ended things on icy terms in Los Angeles and at the very least did not reconcile for years. Morey, on the other hand, is the guy who said he wasn't trading Paul almost immediately before trading Paul to the Thunder, which is the sort of thing that is hard to come back from, even if many believe Tilman Fertitta and James Harden were driving forces behind the Paul-Westbrook swap.

If you believe public reporting on the subject, chasing Paul was on the menu for the Sixers even before they completely overhauled their front office and coaching staff. In early September, reports suggested they were seriously debating a move for the veteran guard, and his table-setting prowess would have been a godsend for a team that went into the offseason with all sorts of creative and ballhandling issues.

Constructing that trade seemed easier said than done at the time. But the Suns didn't end up giving up a whole lot aside from a 2022 first-round pick — Kelly Oubre was the headliner amongst the players, and OKC executive Sam Presti re-routed Oubre to the Warriors for additional picks before the season had even begun.

Reading the tea leaves a bit, perhaps these talks laid the foundation for Philadelphia's eventual trade of Al Horford to Oklahoma City. Horford would have been one of two primary figures (Tobias Harris being the other) potentially at the center of a trade for Paul — financially speaking, anyway — and once CP3 was off the table, pivoting to a trade for swingman Danny Green makes plenty of sense. The primary difference between a Sixers offer and the Phoenix deal, though, was that the Suns were trading players who were of at least neutral value, whereas Horford was on a bad contract and coming off of arguably the worst season of his career.

Imagining this Sixers team with Paul in the lineup is a fascinating exercise. If the Sixers were somehow able to keep Harris in that deal, they would have had a top-four with a bunch of interesting combinations. Paul as the initiator in Simmons small-ball looks, Paul as the setup man for Embiid out of pick-and-rolls and pick-and-pops, Paul bridging the first and second units, there's basically no scenario where he doesn't fit, save for if Simmons rebels against the idea of sharing the backcourt with him.

(I say all this with the knowledge that if Paul had come to Philly instead of Phoenix, we're likely discussing when he's returning from a hamstring injury that he picked up at some point during the year, not his impact on one of the East's best teams. That's how things tend to work out for the Sixers.)

How relevant is this to the present-day team, in the midst of a battle for the No. 1 seed in the East? All it says is something we've known throughout the past year: the Sixers have been in constant search of ballhandlers dating back to the offseason, with Philadelphia even taking Kyle Lowry talks down to the wire with Toronto on deadline day. Given their pursuit of James Harden and their eventual acquisition of George Hill, there has basically never been a point in the Morey/Rivers era where they've felt they're set at guard.

Without turning this into yet another Simmons debate, it should be said most teams who have agreed to max deals with point guards are not constantly hunting for support at the position. Morey and Co. have searched far and wide for ways to improve the team in their first year on the job, and that figures to continue when the story of the 2020-21 season has finished being written.