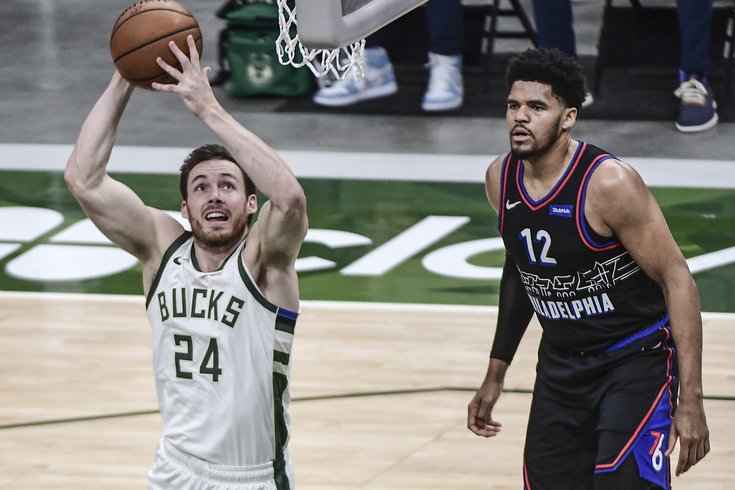 The Sixers lost a game to the Milwaukee Bucks on Thursday in spite of a fairly good offensive performance. As Doc Rivers made sure to note following the game, it's not easy to suffer defeat when you shoot better than 50 percent from the field and 44 percent from three.

"That's back-to-back games for us where we shot over 50 [percent] and lost," Rivers said following their third straight defeat. "That's unheard of, but it happened twice. It doesn't matter who is in or out, we gotta defend better."

The head coach and I agree on that point. So what went wrong?

Covering from the rim to the three-point line has always been an issue for Joel Embiid on some level. At times, it has been explained away as a conditioning issue. But dating back to Philadelphia's 2018 playoff series with Boston, when Al Horford dragged Embiid away from the paint repeatedly, the Sixers have experienced defensive breakdowns when they don't have their anchor looming around the rim at all times. In a matchup with the Bucks, defending out to the three-point line is the rule, not the exception (unless you're matched up with Giannis Antetokounmpo). Brook Lopez is happy to bomb away from three if you give him the time and space to let it fly — he's a 40 percent three-point shooter from either corner, and he's a willing (if sometimes inaccurate) bomber from above the break.

This process is a team responsibility because when guys inevitably get beat on the perimeter, Embiid's help down to the paint has to be covered for by subsequent rotations. Philadelphia's ability to contain dribble penetration was, to put it lightly, pretty bad against Milwaukee.

While many would like to explain it away as a product of missing Ben Simmons, it's not as though Giannis was the only guy who was able to separate and collapse Philadelphia's defense. Khris Middleton made Danny Green look awfully slow at times, and you can see on plays like this one how quickly things can go south against a team like Milwaukee:

Away from Embiid and Green, Tobias Harris has to be doing something here other than meandering through the paint and spinning in circles. That would be true in most instances, but it's especially prudent when he's in the process of guarding Giannis, who Harris should feel comfortable abandoning beyond the arc to help elsewhere. Once Green gets hung up here, the play is basically over.

Figuring out when and how to help off a corner shooter is an inexact science, and it comes from understanding that can only be picked up with time and experience. It's not something Embiid or most rim protectors have much practice with, though it's increasingly important with the way teams line up today. Even still, some of Milwaukee's looks could have been prevented (or at least defended) with active rotations once a play was in motion. George Hill never really thinks about helping to the corner here, gifting a wide-open three to Lopez after Embiid tries to prevent what looks to be an easy lob opportunity for Middleton and Giannis:

Perhaps the Sixers simply decided they were okay living with Lopez being the guy letting it fly. I don't really buy that given how good he has been from the corners and how hard teams try to prevent the corner three as a general rule. Whether you want to blame Embiid for not trusting Harris to defend this well or Hill for, well, whatever this is supposed to be, it's a breakdown they can't afford.

Choosing not to defend Lopez, unfortunately, was a theme of Thursday night's game. It would have been one thing if Milwaukee was asking him to take off-the-dribble threes or something outside of his wheelhouse. But the Sixers were allowing him to step into open threes off of pick-and-rolls and dribble handoffs, at times showing coverage that can only be described as cataclysmic.

The most charitable explanation here is that Embiid is expecting a switch that never comes, and by the time he realizes it, it's too late for him to make a difference anyway. I'm a bit more cynical than that. Scott is providing absolutely zero utility or value with the route he takes here, and Embiid is not prepared to do anything other than sit back here even though Lopez is already on a roll at this point in the game. At a minimum, it's a poor understanding of how the game had played out to that point, and since Embiid is the guy making calls in coverage, it certainly doesn't reflect well on him.

And really, a lot of this could have been prevented by simply sticking Embiid on Giannis, which Rivers was reluctant to do until the second half. That ended up being the wrong choice.

A wicked case of over helping

On the other side of things, you would think by now that the Sixers would be used to playing with Embiid, one of the premier rim protectors in all of basketball. Generally speaking, there are not many instances where Embiid is going to need help defending around the basket, with his length and timing creating serious issues for would-be finishers at the cup.

In spite of this, the Sixers were determined to abandon shooters in high-value spots in attempts to help Embiid around the basket. There are cases where this is at least semi-defensible — stopping Giannis is a team responsibility as much as it is an individual assignment, so helping on his drives could very well be part of the game plan.

Even with that caveat, it's hard to look at Philadelphia's approach on Thursday and think they did all the right things. Helping on Giannis makes sense if it looks like he has turned the corner on somebody. In this example, Mike Scott leaps off of Bobby Portis in the corner when Embiid is in a perfectly reasonable position to dissuade Giannis at the rim:

Scott, as should be clear at this point in the season and recap, is a bad decision-maker who can't be trusted in the guts of a playoff series. Not finding a better option to eat his minutes is one of the front office's few missteps of the season, though ultimately it's on Rivers to recognize how actively harmful he can be at his worst. Anthony Tolliver isn't my idea of a useful stretch big at his age, but he hasn't gotten much burn to show what he has. And Thursday was a good night for Scott relative to many nights this season, with the vet shooter knocking down a trio of threes to help keep them in the game.

End of the day, I'm not going to lose sleep about Scott's decision-making, because his role will (hopefully) dwindle as they go deeper into the season. When other starters and important role players are making these sort of mistakes, that's when the alarm bells start ringing.

Welcome to the spotlight, Seth Curry. This possession has a case as my least favorite defensive play of the season for the Sixers — Embiid is guarding Donte DiVincenzo on an island, has him in no-man's land because of the size discrepancy around the basket, and it's not even fair to say Curry leaves Khris Middleton to try to help on the paint. He is just drifting through this play, throwing an arm up to make it look like he's doing something instead of defending the only option DiVincenzo had as he made his way to the basket.

When Curry's shooting has been on point this season, his defensive weaknesses have been easier to overlook. And yeah, it was the second half of a back-to-back, so he had built-in excuses to look out of it against Milwaukee. But his inattentiveness and physical disadvantages make him a potential liability on and off the ball, which threatens to come back to haunt the team in the playoffs.

This is what makes the calculus of the playoff rotation so interesting. George Hill hardly has enough time to get fully integrated between now and the end of the year, but on some level, he's the perfect fifth player to have on the floor with the Embiid-Harris-Green-Simmons quartet, a capable shooter and switchable defender who at the very least will be in the right places and play sound, intelligent ball on both ends.

Whether that's enough to bump Curry out of the lineup when it matters is another story. I wouldn't hold your breath, but these are the sort of mistakes that will matter more beginning in a few weeks.