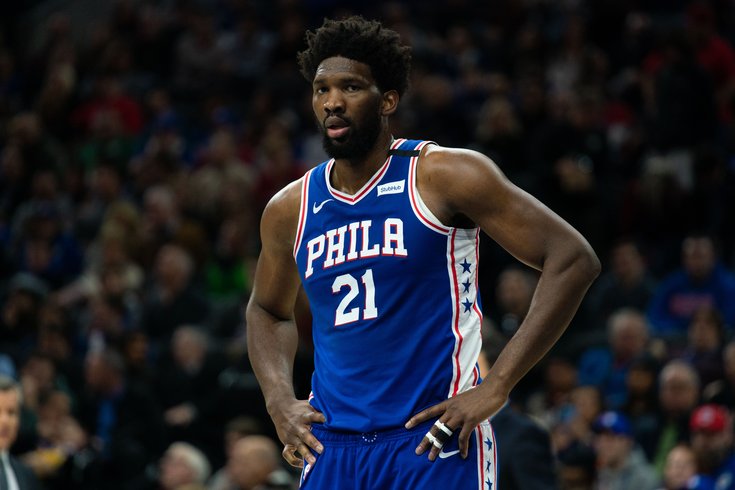 Philadelphia 76ers center Joel Embiid, who suffered a dislocated finger in the win, looks on during the second quarter against the Oklahoma City Thunder.

The Sixers snapped out of their funk and won a hard-fought game at home over the Oklahoma City Thunder, bouncing back with a 120-113 victory. It wasn't always pretty, and Joel Embiid's dislocated finger probably caused some stomach-churning around the Philadelphia area, but they got it done.

Here's what I saw on Monday night.

• The Thunder decided to stick Chris Paul on Tobias Harris for a lot of Monday night's game, which could have devolved into Harris trying to post him up every other possession. Harris resisted that temptation and had himself a great offensive night anyway, getting it going from deep early to help offset some clunky Sixers offense in the opening quarter.

As the game progressed, we saw signs that were more important than Harris just knocking down a bunch of standstill threes. Philadelphia's opening play of the second half was a nice screen-and-roll involving Embiid and Harris, with the former getting an easy bucket at the basket on a nice Harris feed.

Harris has cooled off lately, in part because the offense has gone away from him at times during this tough Philly stretch. There's a tug-of-war the Sixers have to navigate with touches in an attempt to run their best stuff while continuing to keep everyone happy. Harris is a team-first guy who is a more natural candidate to defer, and that means he can get lost in the shuffle, which the Sixers can't really afford.

Unfortunately, Harris was lost in the shuffle for a different reason on Monday — he and Ben Simmons got into foul trouble in the second half, and Brown opted to play conservatively with his franchise center already nursing a hand injury.

• With Simmons and Harris battling foul trouble, it was up to Josh Richardson to carry Philadelphia's offense at times on Monday night. He did a heck of a job with his hands on the controls, though in a change of pace from recent games, it was as their primary perimeter scorer, rather than as a setup man.

The trouble with Richardson's performance, at least in terms of projecting how it impacts them moving forward, is they were more or less the same looks Richardson gets every game. He's a hot-and-cold guy running pick-and-rolls, with a decent amount of shotmaking equity but not enough tricks in his bag to get where he wants to go on a consistent basis.

But they need this level of aggression from Richardson because he's one of the only guys they have on the roster who teams have to respect at all three levels on defense. It pays to have guys on the floor who teams can't sag off or disrespect in some fashion, and Richardson helped the Sixers stay out in front despite a scoreline that usually doesn't bode well for them.

(Speaking of defense, Richardson was also one of the only guys they had who held up well on defense against OKC's guards.)

• I thought this was the best Al Horford has looked physically in weeks. Presented with a matchup that allowed him to take Danillo Gallinari down on the block and go to work, Horford was the hub of Philadelphia's offense for a stretch in the third quarter, forcing the Thunder to make some adjustments and send extra help his way, with Chris Paul's help defense eventually dissuading him.

It's the first time in a while I can remember Horford actually playing in a manner that changed the way an opponent guarded the Sixers. It was not an overwhelming night for him, but it was a step in the right direction.

• James Ennis had an erratic night at times on offense, but I thought that was one of the better performances he has had on the defensive end in a while. Digging in on that end is a New Year's Resolution all these guys could stand to uphold.

One thing you can always count on with Ennis is that he will play hard whenever he's on the floor, chasing down offensive rebounds and trying to beat opponents to a spot, and that turns out to be a valuable trait for this group. They don't have nearly enough players who come out with their hard hats on every night.

• It was a do-everything night for Ben Simmons, who had to guard second-year phenom Shai Gilgeous-Alexander for most of the night on top of setting the table for his teammates. The Gilgeous-Alexander assignment is a lot tougher than Simmons made it look, and he ratcheted up the pressure on Chris Paul and Co. down the stretch to help close this thing out.

Where I really think Simmons deserves credit is for his effort down the stretch of this game, when the Sixers scored on several extra possessions that were created because Simmons refused to be denied on the offensive glass. His contributions late in games are often boiled down to his limitations as a crunch-time scorer, and those are important to take stock of, but when it comes to doing the little things, he has been sensational in that regard.

• Trey Burke gave the Sixers good minutes once again on Monday, and though I've copped several times to being skeptical of him as a playoff-caliber piece for this team, he deserves minutes right now for his fit with this group if nothing else. They badly need live ball-handlers, and Burke has no fear of attacking whoever is guarding him, fast or slow, big or small.

As I have stressed many times over, you want as many guys as you can fit in the rotation who can create their own shot. And unlike in other team contexts, I think Burke's gunner mentality actually helps his case in Philly, where there are a few too many players who are bashful about getting shots up. You don't want Burke to hijack the offense when the second unit is running through Joel Embiid, but with the big man in need of a lift, Burke provided it.

• With the Sixers desperate for a win, I give Joel Embiid credit for wrapping his hand up and trying to gut one out while he was in pain. He didn't have it for a lot of Monday night, but he kept coming anyway, and he helped set up some key buckets for Sixers teammates down the stretch that sealed the win. Couldn't have asked for a lot more from someone who was in that much pain.

That being said, it was clear he was dealing with pain that impacted how he played. His shooting touch disappearing is not necessarily hand-related, but Embiid wasn't even trying to spar with Steven Adams on the glass at times, and he kept fidgeting with his hand throughout the night, focusing more on that than some of his duties on the floor.

The Sixers did not go out and sign Al Horford and build a starting lineup that costs hundreds of millions of dollars to run Embiid out there in less-than-optimal shape during a January game against the Oklahoma City Thunder. You have to actually be willing to use your insurance policy for it to have any value.

I don't know that there's anyone to "blame" here, because you certainly don't want to create a situation where you're pissing off your star by benching him with a non-threatening injury. But someone has to look out for the best interests of the collective long-term instead of just focusing on the outcome of a January game in the middle of a tough stretch.

• The Sixers' defensive philosophy is to sell out to guard the three-point line, banking on Embiid (and to a lesser extent, Horford) to clean everything up in the paint and force opponents into tough shots. Oklahoma City makes that really hard to defend for 48 minutes, because not only do they play some five-out lineups, they play lineups featuring several guards/ball-handlers at a time, which makes them hard to stay in front of.

Philly paid a price trying to do so. They had major players in foul trouble for large chunks of the second half, and the Thunder were in the bonus for nearly nine full minutes in the fourth quarter, which is a huge issue in a game that was tight for the majority of the second half.

You can't make wholesale changes to your scheme mid-game, but the Sixers might run into teams who will throw looks like this at them in the playoffs, and they're going to need to be prepared for it.

• It would be easy to pick on Furkan Korkmaz for getting absolutely roasted by Dennis Schroder whenever he had to guard him on Monday night. And yes, I am going to roast him — Korkmaz looked like he was stuck in cement trying to stay in front of Schroder, and he added to the misery by taking some cheap fouls as his man blew by him.

But the Sixers also needed to do a better job of putting Korkmaz in position to succeed. The Thunder play a lot of guys who are no threat to hurt you off of the dribble and are on the floor to space the floor around their guards. Putting him on a guy like Schroder, who will force you to track him through screens when he attacks, is not the move.

Korkmaz held up his end of the bargain on offense. Give the man a little help.

• It was bad enough that Joel Embiid came out to start the game looking sluggish and unable to do much with Thunder big man Steven Adams. It got a heck of a lot worse when he started to clutch his left hand in pain during his first stint on the floor, taking a brief trip back to the locker room before coming back into the game late in the first quarter.

He didn't last long that stint. Embiid continued to mess with it, and somewhere between when he went out of view from the media seating and forced his head coach to call a timeout, his finger did....this:

I want to die pic.twitter.com/mBTBuuklCF

The Sixers would call this a dislocated finger and get Embiid back on the floor after treatment and tape, and we'll have more on how it got to this point after the game. I don't know whether to give credit to Embiid for playing through it or raise an eyebrow at sending him back out there so quickly — I lean toward the latter.

• As Mo points out here, Al Horford can do a better job of giving Simmons room to work with in transition:

Horford has to do a better job spacing out to the corner when Simmons drives in transition, this just crowded the lane on the fastbreak for Ben. pic.twitter.com/IuU5NTD12G

The reason this is in the ugly is the reaction from the home crowd. Sick of seeing Simmons dump off so many potential shots at the rim, there were some groans and even light booing in response to this play, and they continued to urge Simmons to shoot the next couple of possessions down the floor. Everyone is fed up with the passiveness, and I totally get it.