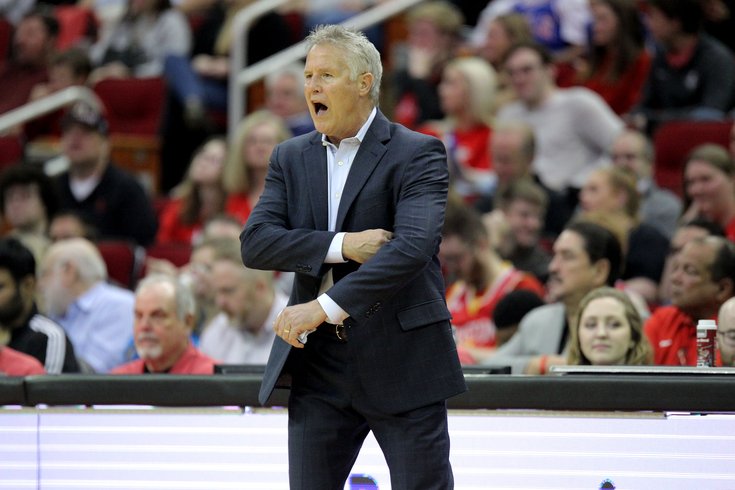 The Sixers showed some more fight after getting waxed by the Indiana Pacers on New Years Eve, but the Rockets were comfortably out in front for most of Friday's 118-108 loss, and Philadelphia still has plenty to figure out about how they move forward from here.

Here's what I saw in the loss to Houston.

• Brett Brown was forced into it basically by necessity, but the Sixers went to multi-guard lineups early against the Rockets, finding more room in the rotation for Trey Burke in the middle of a good individual stretch. This will shock almost no one, but it was a look that worked for Philadelphia.

Burke was a big part of that individually, taking advantage of favorable one-on-one matchups on the perimeter and getting to the rim with ease. He comes with his warts (and he gave a lot of those points back on defense), but Burke helps the Sixers play with pace, which is a needed ingredient for this group both in the halfcourt and in transition.

It was not just that lineup choice that changed, though. The Sixers made it a point to actually use Simmons as an off-ball player, and they have ramped up the number of plays where he is the screener in pick-and-rolls over the last two or three games, often with great results. Josh Richardson is getting more and more opportunities to take the reins there, and activating Simmons as a lob threat and downhill athlete makes sense on paper, provided teams can't just sink way under on the action every time.

It seems unlikely Burke will continue to get crunch-time reps, so working on the chemistry between Simmons and Richardson on these looks will be pivotal for the Sixers.

• Let's stick with Simmons for a moment. The focus tends to be on everything he can't do, specifically his shooting, but this game should highlight how much the Sixers theoretically can do with him on both ends of the floor. He can guard James Harden, he can push the pace, he's a dangerous attacker as a roll-man, and his passing is a skill that can be taken advantage of all over the floor. This is true regardless of the personnel they have around him.

Harden would end up getting him, but Simmons made life difficult and forced him into tough shots on more possessions than most guys are capable of. Simmons had his down stretches on offense, but he did an excellent job of trying to breathe life into the team by taking off in transition, and he embraced (and thrived in) his job as a screener big-time.

This was a game where it felt like the Sixers needed to offer a response to a miserable previous week, and Simmons answered the bell for the most part. We spent a lot of the last few days talking about accountability, and I was curious to see how the entire group would respond to that challenge. The player who stood tallest was Simmons by a mile, even if it was somewhat a product of play design.

• I think the limitations of making Josh Richardson your primary pick-and-roll guy are pretty clear, but for the time being, the Sixers are going to have to keep giving him the ball in those sets. If it helps unlock this version of Simmons, you live with some of the dips in form.

• Furkan Korkmaz gave the Sixers decent minutes on a night where they needed them. He went cold from beyond the arc, but he made some surprising contributions on the defensive end to help keep things tight in the second half. Not a matchup that is especially kind for him with how Harden hunts switches, but a good effort nonetheless.

• It used to be that you could at least count on Joel Embiid to show up with gusto for an appearance on national TV, particularly in a game where he's up against a guy he has a bit of a feud with. So much for that — Embiid looked out of sorts at times against Houston on Friday night, making mistakes that a player of his stature and growing experience should not be making.

Embiid looked every bit like a player who was taken out of rhythm by having to sit exactly one game against the Indiana Pacers. His reads weren't sharp out of double teams, he got stripped for a bad turnover two because he wasn't bracing himself for weakside help, and on the whole, he just didn't look ready for this game. To show up and look like this after all the talk about accountability this week is simply unacceptable.

Add onto that getting beat down the floor several times by Clint Capela, leading to easy Houston points, and you have a recipe for a bad Embiid night. His numbers were fine enough, but if you can look at how Embiid carried himself and that game and come away satisfied, we see the game differently. With a lot of the offense centered around Simmons, he checked out instead of staying engaged. That can't happen, period. And yet this isn't the first time he has floated in and out of a game because he wasn't the primary option at all times.

Brown made a pretty bold choice to keep him on the bench for such a long stretch of the fourth quarter. It was the right decision. If Embiid wants to make sly comments about what Simmons needs to do to help the team, perhaps he should think about how that applies to him as well.

• Al Horford has gone from a guy I expected to make every open shot he took against the Sixers to a player who inspires a small sense of shock whenever he makes an open jumper. So many of the shots he gets in Philadelphia are wide-open, but the quality of the looks never seems to matter, with Horford missing left, right, short, and long.

Even in the backup center role where he should theoretically thrive on defense — or at least look more like the guy they paid him to be — Horford has looked out of his depth lately. The sort of athletic, springy bigs who populate most benches in the NBA are giving him fits, with Horford often caught in no man's land between the driver and roller.

There have been stretches like this before for Horford, who was nicknamed "Average Al" by some perturbed radio folks in Boston for a reason. He has rallied from these down periods to come back and crush teams down the stretch, but even if the Sixers get a major defensive uptick from Horford, it's hard to see how they get where they need to go with how poor and ill-fitting he looks on offense.

Philadelphia is built with the expectation that they will win and win now. Considering how poor he looks alongside Embiid and the struggles he has had without him recently, the Sixers are going to need to take a hard look at whether Horford helps accomplish that goal. They will need to beat teams that aren't the Bucks to win in the playoffs.

• Perhaps the Sixers need to go from passive-aggressive comments about Simmons' shot to outright aggressive comments about Simmons' shot. There was a first-quarter possession where he stood unguarded from about 18 feet, passed up a wide-open shot, dribbled into a wall of defenders, and then threw the ball to Embiid with the shot clock winding down. Embiid bailed him out with a make, but shouldn't be in that position to begin with. Step out to the three-point line and do your job.

That's the only negative thing I'll say about him tonight, he was far down the list of problems.

• In the span of about four seconds in the second quarter, Mike Scott gave up an offensive rebound on a free-throw and then fouled Russell Westbrook in the process of Westbrook sinking a layup. He is not making shots, he is clueless on rotations, and they simply can't rely on him moving forward. The sooner they can upgrade those minutes, the better.

I mean this sincerely — I don't even think Scott would be able to explain what exactly he was hoping to accomplish here. Embiid, the guy who needed to pick up Capela, runs right in front of him as he makes the decision to stick to Capela.

What is Scott doing here? pic.twitter.com/alRBRAXWzP

One thing I would caution against — overpaying in a trade to get someone to basically be better Mike Scott. They need to bring players in who can bring more than one thing to the table. The emergence of Burke highlights how valuable shot creation is for this group, and if they can bring in one or two guys who can dribble and shoot, they could be cooking with gas.

• On the subject of Simmons as a screener, the only thing stopping Philadelphia from choosing to run that is...well, nothing. There have been times when there weren't any secondary playmakers to help use him in this way, but those excuses went out the window last season. If you want to point the finger at Brown for an issue, I'd say this is a good way to make use of your time.

This team can't just keep trying to sledgehammer through everyone in the paint every night. Yes, Embiid is going to have to get his touches there, and it will be an integral part of their success. But Simmons being this good in a role he has been used sparingly in should put everyone on the team on notice. They all have to be willing to try new things, coaches and players alike. If the post-up center has to set more screens or move to the corner on some plays, he should do it. If the team's supposed point guard has to be more of a downhill forward, so be it.

We'll dig a little deeper into this tomorrow, but it's something that is going to have to feature moving forward.