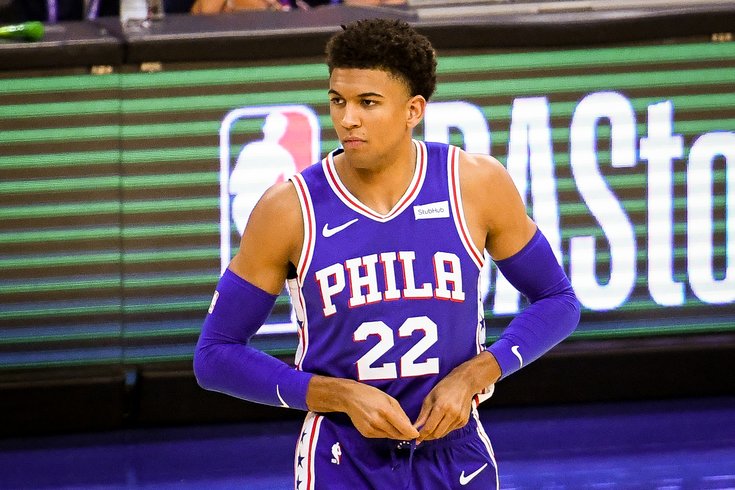 Matisse Thybulle is out indefinitely after suffering a right knee sprain and bone bruise in Saturday night's win vs. the Washington Wizards.

A Sixers' team spokesman told PhillyVoice that the injury was suffered when he hyperextended his knee late in the fourth quarter after contact with Wizards wing Troy Brown Jr.

Thybulle was evaluated on Sunday morning, and the Sixers say he will be re-evaluated in approximately two weeks. On an optimistic timeline, he would return in time for Philadelphia's home game against the Oklahoma City Thunder on January 6th, missing at least six games. That is a tough part of the schedule, by the way — Philly has a couple of winnable games against Detroit and Orlando this week, but the other four (Milwaukee, Miami, Indiana, and Houston) are all tough, with three of them coming on the road.

Reactions to this injury, I imagine, will be divided into two schools of thought: you're either asking, "How does this impact the Sixers in the immediate term?" or cursing under your breath about Philadelphia's rookie curse striking again. Before we get to the former, it really is uncanny how unlucky they have been with first-year players.

As of this very moment, things are still uncertain with regards to how the Sixers may respond to the injury, based on conversations PhillyVoice had with members of the organization on Sunday afternoon.

The mind drifts to Delaware, where the Sixers have a couple of players who would be natural fits to bring up to the big leagues, even if it's just as emergency depth. Zhaire Smith has been out of sight and out of mind for basically the entire season, and in theory, Smith brings a jolt of energy and athleticism that separates him from the other non-Thybulle wings on Philly's bench. Unfortunately, he's far behind Thybulle in polish, and he hasn't exactly lit things up in the G-League. His three-point shooting has been below par (29.7 percent) and he has been a secondary figure in a league where you'd hope he could dominate more than he has.

Shake Milton brings something totally different to the table, but given the team's current issue, you could make a case that he makes more sense than Smith as the team tries to cope with this new zone defense issue. Milton can shoot, put the ball on the floor, and at least offer some secondary playmaking, so I wouldn't be surprised if he's brought back into the fold.

(Don't forget two-way player Marial Shayok either. He has paced the Blue Coats for most of this season and could walk into an easy-to-define role as a bench shooter with the big club. His numbers from deep aren't especially encouraging so far, but he's been asked to become a high-volume scorer for the Blue Coats, and would presumably see his efficiency climb in a more stable role.)

Regardless of what the Sixers decide to do in order to cope with this, realistically the rotation is going to remain basically the same. When Josh Richardson returned from injury, Brett Brown was interested in potentially cutting the rotation down by one player and putting the writing on the wall for Furkan Korkmaz, who had been far outplayed by Thybulle in the weeks prior. My best guess is that we see Korkmaz settle back into his role as one of the first two wings off of the bench with James Ennis, and the Sixers will hope to get by with that pairing for wing depth until Thybulle gets back.

One thing that could fly under the radar — on a team that has lacked for energy over the last few weeks, even when they were rolling, Thybulle was a reliable shock to the system every time he stepped on the floor. There are pitfalls to playing young, excitable players on a title contender, but beyond what he produces in terms of raw box score stats, I'm interested in how (or if) the Sixers replace the bounce he gives them off of the bench.

Sorry to be the bearer of bad news during the holiday season. Hopefully, this is just a blip for one of the team's rousing success stories of the first few months.