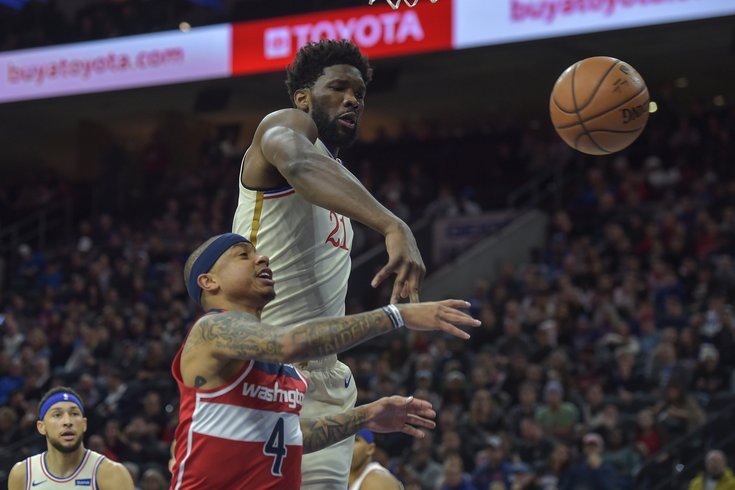 The Sixers earned a badly-needed win over the Wizards on Saturday night, emptying the bench for garbage time at the end of a 125-108 victory.

Here's what I saw on Saturday night. Go Birds.

• Washington is down some bodies at the moment, so they do not have many guys they can bring off of the bench to deal with Joel Embiid. In a funny twist of fate, one of the only guys available was Anzejs Pasecniks, the European stiff Bryan Colangelo traded up for the right to select years back.

When I tell you it was a physical mismatch, what I really mean is it looks like Embiid is going up against a child. He tortured poor Pasecniks to the tune of four fouls in five first-half minutes, and that forced the Wizards to send an army of wings to try to defend him. Admiral Schoefield did his best to antagonize Embiid with some jawing on both ends, and he's a strong dude, but let me tell you, it is hard to make up for the size difference.

(That being said, Embiid should be ashamed of himself for letting Pasecniks get a few over on him in the second half. Come on, fam.)

There are limitations to playing through Embiid at the top of the zone, by the way, despite the success he had individually against the Mavericks on Friday night. Philadelphia's offense settled for a lot of tough jumpers on Saturday, and that's a product of Embiid getting occasional bouts of tunnel vision in the post. He settled down a bit as the game wore on, and the Sixers' ball movement ended up being enough to win the day.

• You can beat a zone defense a lot of different ways. The simplest way is to make some open shots, but failing that, you have an inherent advantage on the offensive glass as players try to find a man to box out with the ball in the air. The Sixers are the sort of team that should dominate on the glass on both ends, and reasserting themselves there against Washington went a long way toward solving the zone issue.

Ben Simmons was the leader of the pack on that front, bringing in four offensive rebounds himself in the first half and playing with a consistent level of energy we haven't seen from him the rest of the week. Before the game, Brown said this was the area he believed Simmons could help the most vs. the zone, and whether that was a conversation the two of them had or not, Simmons justified the belief.

But he wasn't the only guy who got to work on the glass. He and Al Horford tipped the ball back and forth to each other several times on one possession, and the Sixers looked the way you'd expect a team with a size advantage to look for once.

• Trey Burke got an opportunity to play the backup point guard minutes on Saturday night after playing decent in a Friday cameo, and I think he acquitted himself well (outside of a mistake we'll get to below). I'm not sure they should be counting on him making some tough stepback threes every night, but even when he lacks scoring punch, he gives them a little bit of added tempo on the floor.

Raul Neto has been a tremendous shooter this season, but he has been blah everywhere else for a while, and the Sixers have clearly needed a change of pace. Burke gives them that, and we'll see how long of a leash he has in this role.

• This is the breakout game Josh Richardson has desperately needed. He continued to struggle from beyond the arc, but he killed the Wizards in basically every other way, catching them napping with some off-ball cuts, working the handoff game with Joel Embiid, and adding all of that on top of some of the only tenacious defense anyone on the Sixers played at the other end.

Granted, this was not exactly the toughest defense Philadelphia has on the schedule. But it was a reminder of Richardson's versatility on the offensive side of the ball. He told reporters after Wednesday's loss to the Heat that they needed to attack zone defenses more aggressively than they had off-the-dribble, and instead of relying on other people to do it for him, he led by example.

When you only have roughly three guys on the team who can dribble, you need all of them to come through on a nightly basis in order to get wins. Richardson has been lagging behind expectations lately, but this was a nice return to form.

• I would like to see Tobias Harris take back the larger role in the offense that he has played for most of the opening months of the season, but he shot well on Saturday night, moved the ball, and the Sixers ultimately coasted to a win in the end.

• Matisse Thybulle had a quiet first half after getting a slight demotion in the rotation — perhaps as a product of Brown wanting to make changes to combat the zone, not sure yet — but he had a terrific final stretch to put the game away for Philly.

• Gotta love hearing some loud, "DALLAS SUCKS" chants at the end of the game.

• There was a funny moment early in the second quarter when Joel Embiid had Admiral Schofield sealed on the block and was waving his hand for the ball, and Trey Burke never even looked in his direction. The big man screamed in his direction and waved his arms in frustration, eventually getting the ball after some more dawdling on the perimeter.

Burke learned his lesson the next time down the floor. Embiid planted himself at the free-throw line, waved one giant hand at Burke, and immediately scored over Schoefield with ease. Your mission as a backup point guard is simple — get the big guy the ball.

• Al Horford turning the ball over while posting up Isaiah Thomas seems impossible, but he somehow managed to do it. Incredible.

• Were there moments when the Sixers played with improved defensive energy on Saturday night? Sure. But those moments were the exception, not the rule, and one day this team will learn the way to buy yourselves some rest is to play hard for the first 36 minutes so you don't have to play your best players for the final 12.

The Wizards have been a good offensive team this year, and Bradley Beal can fill it up with the best of them, but the Sixers gave Washington some unnecessary extra possessions because they couldn't be bothered to end them with rebounds. A couple of extra seconds of effort per trip, and the Sixers would have coasted to a victory instead of having to play a lot of their starters normal portions of minutes on the second night of a back-to-back.

Nitpicking during a comfortable win, but still.

• The third foul called on Furkan Korkmaz on Saturday night was an absolute disaster.

• I'm not sure if those of you watching at home can hear Sixers P.A. guy Matt Cord yell "AAAAALLLLLLLLLLLLL" every time Al Horford scores, but if I never heard it again it would be the best Christmas gift anyone has given me in years. I will hear it in my nightmares. Make it go away before my ears start bleeding.