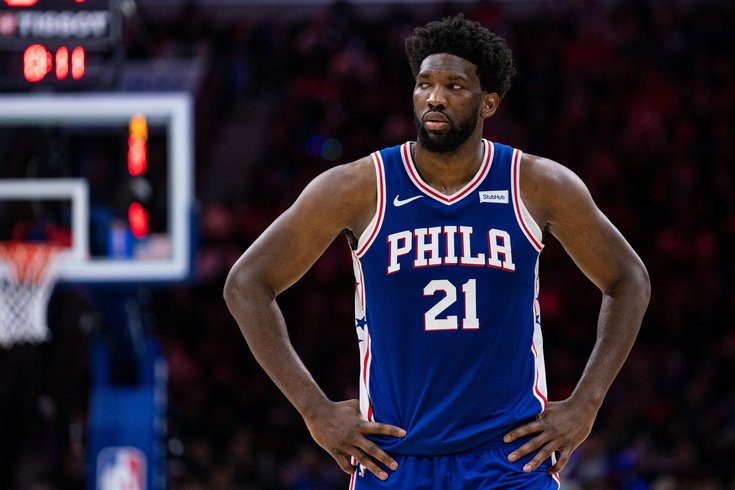 NBA teams generally don't play zone defense. Up until the early 2000s, you couldn't even legally play it in the NBA, and though it has certainly seen an uptick since the turn of the century, few teams use it as anything close to a primary weapon. It exists as a changeup to throw opponents off.

Mission accomplished for Miami on Wednesday night. The Sixers saw firsthand just how damaging it can be against their offense, built around a post-up big man and a 6-foot-10 point guard who is disinterested in the perimeter. After falling behind by 10 points in the first quarter, the Heat came out in the second and played zone defense for the vast majority of the game until the final whistle. It was the spark behind a 37-19 second quarter for the visitors and what would ultimately carry them to victory, late push from the Sixers aside.

So what exactly went wrong for Philly against the zone? That depends on who you ask, and when you piece together all the answers from the Sixers' brain trust, you find the truth, because it took each failing element to bring Philadelphia to a screeching halt on their home floor.

Let's start with a guy who played in this very zone, former Miami wing Josh Richardson.

"I think it flattened us out a little bit," Richardson said after the game. "I think we were settling a little bit, not getting the ball inside the way we could have. They're good at the zone, they practice it a lot...you just got to move the ball, you got to get the ball to the high post, low post, and play inside out, or you just got to drive it. You can't just stand there with the ball over your head."

There's correct answer No. 1. The fear of a zone collapsing on you cannot prevent a team from taking it into the teeth of a defense. Beating a zone means you're going to have to make threes, but you can still take those threes on your terms, forcing teams to collapse on you before finding the open shooter.

Philly did this just fine early on, with Richardson leading the way.

A more interesting version of this answer came from Embiid, who appeared about halfway through an answer complaining about his lack of touches in the first half before he thought better of it.

Once Philadelphia made it a point to get the ball to Embiid in the fourth quarter, he and the team came alive, and that's not an accident. If he is to be tasked with anchoring the defense, and he moves mountains every night, he wants to see the favors returned to him on the other end. That is natural.

And when that doesn't happen, you get moments like this, which drew groans from the home crowd:

That isn't going to cut it against the dregs of the league, let alone a good playoff team like Miami.

"We need to make shots"

"You just got to make shots, you got to make threes to make them get discouraged and get them out of the zone. When they first threw the zone on us, we didn't make enough shots, so they got encouraged with it," Harris said. "It was a different look for us that we haven't seen that much, credit to them they pulled it out, I just didn't think we made enough shots when they presented the zone."

They were doing just fine at this when Miami first rolled out the zone. Some of that, though, is a function of the lineup they had on the floor at the time: Raul Neto, Furkan Korkmaz, Josh Richardson, Tobias Harris, Joel Embiid. Although you certainly wouldn't call them all knockdown shooters, each of them has to be respected in the closeout game.

And so the response early on was simple: force a collapse, then hit the open perimeter player and watch the dominoes tumble.

"We kind of hope they do play it," Harris said of the zone, "because we know we're not going to shoot like that. We make a couple of shots, that's why teams don't really play zone, guys make shots and then they get up out of the zone real quick."

The only problem with that logic is it assumes everyone on the team has an equal ability or interest in making shots. I may be stating the obvious, but the Simmons shooting question hangs over everything with this team, zone defense or not.

Teams are incentivized to play zone against the Sixers merely because Simmons is on the floor. We can talk about a million other things wrong with this team, but the foundation of this team is what it is. You could trade Al Horford, Tobias Harris, and Josh Richardson, replacing them with a stable of the best-shooting wings in the league, and the tentpoles are still the same. You will still arrive at a place where Simmons sprints away from the three-point line to drive into a wall of defenders waiting for him, leading to late-clock shots like these for one of the other players who ends up with the ball.

The players who actually take shots need to make shots, and Harris is dead on about that. Unfortunately, not everyone on the team is interested in taking shots, and the public knowledge of that fact will invite more zone moving forward.

What can't happen, of course, is letting the frustrations with zone defense (or any defense, for that matter) bleed into the rest of your game. And the Sixers did exactly that.

"The second-quarter stretch where they made a run, we had no energy, it was like we were zombies out there walking around, too many easy baskets and whatnot," Harris said. "We relaxed up second quarter, they came out and got it going, especially the end of it...a lot of execution on our part we didn't do a good job of...I just think we were too late, after the run, it was too late to really gather our energy and really get back and going."

"I think we ended up overthinking it too much, I feel like we've been really quite good against a zone this year," Brett Brown added. "It put us on our heels, and I don't feel like we responded the way I thought we would, I think it crept into our defense, it watered us down on both sides of the ball...it was as much a mentality and mood swing as it was anything."

I will spare you from 25 clips of the Sixers getting beat on backdoor cuts, blowing switches, and otherwise failing at things they're more than capable of executing, but suffice it to say it was not pretty for them on Wednesday night until about midway through the fourth quarter. They rediscovered their killer defensive instinct when it was too late for it to make a difference, with the crowd swelling behind them for a killer fourth-quarter push.

And that was ultimately the most frustrating part about this game on Philadelphia's end. Within their collapse, there were moments that showed a sustainable path forward. When they committed to getting stops, they were a loud, overwhelming machine. And they were certainly expecting to face some zone, between messaging from the coaching staff and a former player who knows what they do and how.

Everyone can see the path to victory, if only they would just take it.