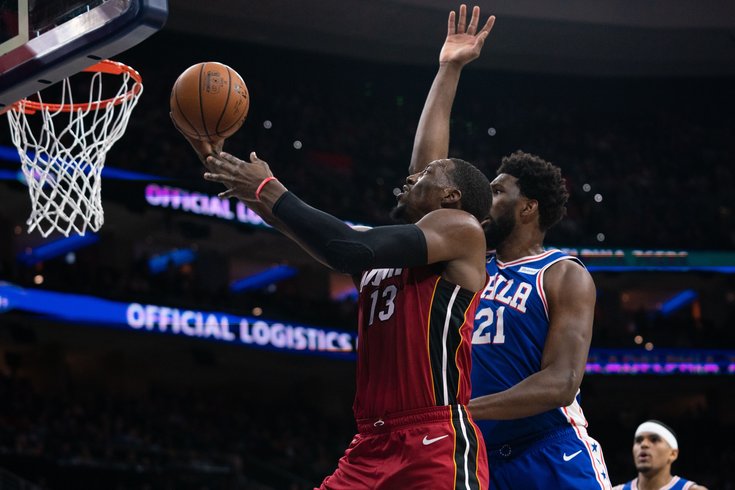 The Sixers battled valiantly to overcome a double-digit Miami lead in the fourth quarter, but their comeback attempt came up short, and they suffered their first home loss of the year, 108-104.

• The Heat seem like they should be a team that challenges Philly in the halfcourt more than they actually do in practice. Jimmy Butler at the controls of pick-and-rolls, Bam Adebayo rolling and providing a vertical threat, and tons of shooting around that duo who can make shots if Butler can collapse the defense.

There's just one problem for the Heat in this matchup — Butler's methodical style of play in the pick-and-roll is often to Miami's detriment. The Sixers are hurt the worst by guys who are quick decision-makers that take off for the rim at the first possible opportunity, and Butler often lets their big men off of the hook and gives them time to play catch-up.

Something to keep in mind for a potential playoff matchup down the road.

• Matisse Thybulle's defense was one of the few big bright spots for the Sixers on Wednesday night. He was one of the primary catalysts in their hot start to the game, poking balls away from the likes of Tyler Herro and getting the Sixers running on the fast break.

Hard to get too jazzed up about a game where he played a minimal role, but he continues to be excellent on their home floor. Now they just need to figure out how to get him rolling when they're away from home.

• I have to acknowledge the Sixers battling back down the stretch, and you can throw in some platitudes about their perseverance, the ability to dig down deep and get stops to claw back, etc. When you see them turn the screws and play pressure defense against teams late in games, they remind you that they probably have the best collection of defensive talent in the league, and they can impose their will when it matters. That is going to be a huge factor in their fight for an NBA championship.

And I can tell you, even if the players don't after the game Wednesday, that the crowd was an enormous factor in that game down the stretch. That arena was deafening in the final moments of that game, and the Sixers rode that wave of sound all the way to a near comeback.

But they shouldn't have had to play from out of that hole to begin with. So they get a sliver of credit, but not much.

• I thought Brett Brown's challenge was doomed the second he made it because of body contact Joel Embiid made on Butler, but you absolutely have to use the challenge there to try to swing the game in the final moments. In a three-point game, it's a no-brainer for me.

• The Sixers appeared to be rolling when the start of the second quarter rolled around, only for Miami to roll out a zone defense for almost the entirety of the next 12 minutes. A controversial take — I don't think Philadelphia responded to that poorly to it conceptually, but the people they rely on to make shots were brutal for most of the quarter, and it allowed the Heat to slowly work their way back into the game, eventually taking a decent-sized lead into halftime.

Philadelphia was running players into the middle of the zone, and then either taking open jumpers there or using the pressure that came to find the open player on the perimeter. But when Mike Scott and Josh Richardson build two separate houses of bricks for most of the game, it's a little difficult for a team devoid of shooting options to beat the zone.

The turnovers were a different story. When the shots stopped falling, the Sixers got a little too panicky and began trying to force passes into tight windows, Ben Simmons especially, and that played into the hands of the Heat, who got out and ran instead of trying to beat their heads against a brick wall in the halfcourt.

Dribbling into the teeth of a zone isn't necessarily a fruitful venture, but it doesn't help that the Sixers basically have no reliable rotation player who can be trusted to dribble in traffic.

• The real upside of the zone defense for Miami was the impact it had on Embiid, who looked to be off to a flying, aggressive start when he checked out of the game for the first time with seven early rebounds. They don't have a match for him inside, and he made them feel that physical advantage early.

But once they set up the zone, Embiid was relegated to a passenger in the offense. He was unable to establish position on the block with help around him at all times, and offensive rebounding becomes much more of a chore when you're having to wade through several bodies at a time in order to chase the ball on misses.

That doesn't excuse his lackadaisical effort in other parts of the game. Embiid was lethargic at times on the defensive end, with the home crowd (rightfully) jeering him for standing flat-footed under the rim as the Heat collected a floorboard in the second quarter. He has had far too many effort-based issues so far this year, and even if the goal is to get him to mid-April healthy, the path to get there absolutely cannot involve mailing it in during the games he does play. He came alive again in the fourth quarter, but by then, it was too late.

• Those issues vs. the zone for Embiid are not made any easier when he's next to Simmons, who is still not even pretending to care about trying to space the floor and unclog the paint for Philly. You want to get someone in the middle of the zone, but you don't want to have two guys in the painted area and defeating the purpose of trying to find the open space.

Philly tried to play around this problem by turning Richardson into the lead ball-handler and putting four guys around Simmons with the center (Al Horford) spacing the floor around him, and that feels like a stop-gap solution to the real problem. This is not the first time they have seen a zone, and it will not be the last, and until Simmons' skill set rounds out in a way that stops this from being viable, they're all going to feel the pain from it.

• Neither of Horford or Richardson look right at the moment, for different reasons. I'm not overly concerned about Richardson's explosiveness, which he has still shown in fits and starts, but his apparent wrist issue looks like it could be impacting his ability to shoot and finish. Since those are two things the Sixers desperately need him to do, that's a problem, and

I'm more concerned about how Horford has looked, given his age and the dwindling margin for error he has on this team. Horford being slow in space is a death sentence, as he has to protect to the rim with backup lineups and cover smaller/quicker players with the ultra-sized lineup. They should be willing to give him some extra time off if that's going to make a difference, especially because the Sixers are closing out December with a crowded schedule over the weekend. And frankly, a tight hamstring being his biggest issue would probably be good news for Philly compared to the alternatives.

• I ultimately think Mike Scott is going to turn his season around eventually, but when he isn't making shots, he is not bringing much to the table for the Sixers. In fact, he's often taking things off of it in those instances, contributing poor defense and some avoidable turnovers when they can least afford them.

My beliefs about who the Sixers should target heading into the trade deadline have a built-in assumption that he's going to be a reliable playoff contributor. That's still where I'm at for the time being, but a lot of people would feel much better about this team if Scott could just normalize from three.

• James Ennis was an absolute mess on Wednesday. Botched some easy switches with other wings, didn't add much on defense, one of the few real clunkers he has played this season.

• Playing zone for an entire quarter (and most of a game) can work, but it is still for cowards. You will never move me off of this hill.

• The broken speakers in the Wells Fargo Center were absolutely awful to listen to for the entire game, so someone might want to do something about those.