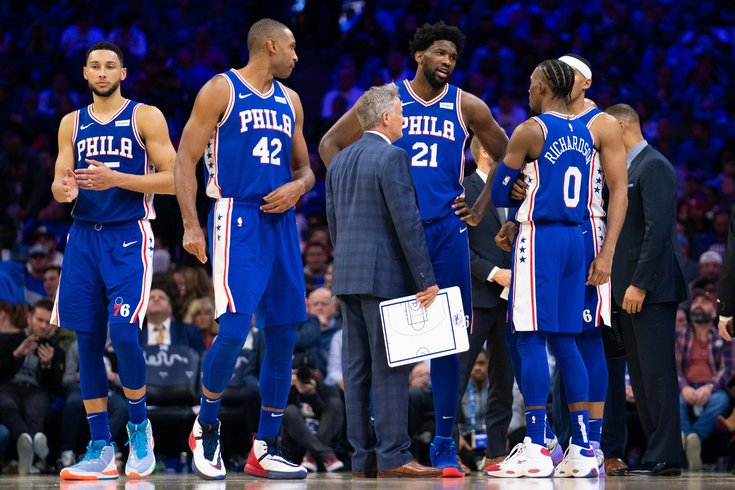 The Sixers starting five huddles with head coach Brett Brown during a stop in play.

The Sixers, you may have heard, laid an egg on New Year's Eve. In the words of head coach Brett Brown, they "stunk," and did so badly enough to trigger a post-game rant from Josh Richardson on a lack of accountability in the locker room. Not the sort of thing you want to hear from a team allegedly fighting for a title.

Thursday, the faces of Philadelphia had their chance to publicly weigh in on the accountability issue, having conducted a team meeting in the morning to talk things out in-house. For the time being, they're putting on their best appearances.

"It has been a rough last three games, but we're good. I don't really want to share what goes on inside, but we're good, I feel like everybody has a good spirit and we know we're going to get out of it," Joel Embiid told reporters Thursday. "I don't talk much, I lead by example, but if I feel the need to say something I will, and as a leader you kind of have to do that. That's what you got to do."

"Everybody has the freedom to do whatever they want, we're not entitled. I've been here the longest, Ben has been here, we're not entitled. The way I get better, I like people telling me what I don't do best, and I feel like every time if I do something wrong, these guys let me [know]. We're humble, we want to learn, we want to get better...there's no sense of people being afraid to speak up, everybody has the freedom, and that's the culture that we have. There's nothing going on."

It's probably the right thing for a team leader to say publicly. The Sixers gain nothing from their best player coming out and putting everyone on blast, and from this writer's chair, the fix doesn't appear to be a simple one, with roots in every area from the effort to clunky team construction to flaws with the roster's core players.

The first item there is the one that has generated most discussion lately, perhaps rightfully so. With one of the most talented starting fives in the league, the Sixers have made it a habit to mail in games or at least stretches of games, leaving themselves in a position to struggle against opponents they should beat easily. Their three-game losing streak has featured familiar problems: bad turnovers, sluggish effort, and numerous questions about the state of the project.

Some have posited that these Sixers are a switch-flipping team, one that can ultimately turn it up when they need to and overcome these issues. Brown sees that mentality developing, and he does not like it.

"I definitely see it out of them, and it's not acceptable. I completely coach and live life thinking good things add up, you don't just click your heels and April 14th is here. That's not how I see anything, and we shared that notion today," Brown said. "That's stuff where I need to continually remind them, at times maybe remind them more than I have. There are so many bullets you feel as a head coach in the NBA you've got, I fire them responsibly."

"You do need some help. People do need to own things, and be able to accurately answer the question, what do I want out of this? What's my role, what's my responsibility, what's leadership look like in my world? And I do the same, I don't absolve myself from any of those questions...I think some of the problems have been derived from that [switch flipping] notion, and it's not smart."

And yet, even as the Sixers tried to circle the wagons and block out the outside noise, even as they said all the right things about each taking responsibility for where they are, the big fella couldn't seem to avoid barreling into the subject that has hung over this team for the last two-plus seasons: Ben Simmons' shooting.

He did not mention him by name, he did not point the finger at anyone individually, but it is not hard to figure out who and what he is referring to when he uses specific examples in response to broader questions:

REPORTER: Starting lineup has struggled offensively. What have you seen in that regard?

EMBIID: We just got to look at ourselves and see what we can do individually, we’ve got to help each other even if it means being outside of your comfort zone for the greater [good] to help the team win. Meaning that, if you’ve got to space and shoot it, you’ve got to do it. We need everybody to buy into that and we’ll be fine, we’re going to be fine. We’re still finding our groove, we haven’t been totally healthy, the whole starting lineup. Like I said, we’ll be fine.

On its own, not an especially damaging quote. But this is not the first time Embiid has not-so-subtly hinted that Simmons needs to shoot the ball to help the team. In mid-December, he told reporters double-teams most often come off Simmons' man this year and last. In mid-November, he said it as clear as he possibly could: "For us to win, we are going to need him to shoot."

This is the thing about using a word like accountability — you can make it mean whatever you want within the context of a team sport. In the context Richardson used it the other day, it's a clear stand-in for things like effort and focus.

But being accountable also means doing things for the sake of everyone around you and not just playing in a way that makes you feel comfortable. This is why you see Embiid spend possessions on the perimeter and setting screens in pick-and-rolls. It isn't because he particularly likes to do those things (though he likes to shoot threes more than he lets on), but because those things open up the floor for other players, like Simmons, to go to work. So when the franchise center and head coach publicly broadcast their desire for one player to shoot, and he doesn't, in that way he is not fulfilling his responsibility as a core member of a title hopeful.

So what does Simmons have to say on the issue of accountability? He agreed with Richardson, and believes Philadelphia's morning meeting on Thursday helped clear some things up.

"We all know why we're here and what we want to get out of being here. That's a championship, we just have to hold each other accountable," Simmons said. "Ups and downs, you know? You're not going to be 82-0. As long as we stay together and we don't lose our minds, we're going to be good. I think we'll be fine."

Opinions will vary on that assessment.