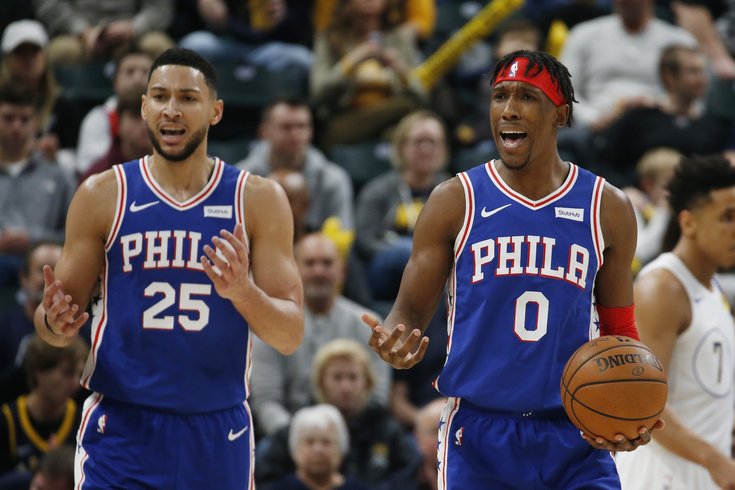 The Sixers got absolutely smoked by the Pacers on New Year's Eve, 115-97. There won't be a lot of positives to talk about after that one.

Here are a few thoughts as we head into 2020. Everyone have a safe and happy evening — and please don't drink and drive.

• Kyle O'Quinn was pretty good. It was like having a nice deck chair on a sinking yacht, but hey, he hasn't been in the rotation much lately, so I'm sure he's happy with that performance.

• One positive thing lately — Josh Richardson is showing improved chemistry in pick-and-rolls with multiple Sixers teammates. We have discussed his partnership with Joel Embiid some, but there have also been signs of life with Ben Simmons as a screener. That's a look many have wanted to see him in for years, and after going to it in overtime vs. Miami, the Sixers had some success with it in Indiana.

Richardson was one of the only guys, perhaps the only guy who acquitted himself well on both ends to end the calendar year. Congrats to him for not looking like complete crap.

• Here's an area where I take issue with Brett Brown and always have — instead of trying to make opponents react to Philadelphia's strengths, there are plenty of examples where he's lining up his team to best deal with what an opponent does. Starting O'Quinn is ostensibly to deal with their twin towers, Myles Turner and Domantas Sabonis, but they have to defend you on the other end, too. Spread them out and make them defend you out to the three-point line, instead of making their lives as easy as possible defensively.

And by the way, O'Quinn acquitted himself fine! The results of this decision were not bad. It's just not the sort of philosophy I think coaches should live by.  You have the more talented team even without Embiid, so go out and play like that's the case.

• It should be clear to basically everyone that Embiid is Philadelphia's best player, regardless of whatever frustrations you have with him. And in spite of the Sixers investing in a massive insurance plan for Joel Embiid in the offseason, they are dead in the water against good teams without him. So how valuable is that insurance policy?

If I have been focusing a lot on Al Horford lately, it is because he was their big bet of the offseason, and lately, it has not been clear what they're getting out of him. Struggling on offense at power forward with Embiid in the frontcourt is one thing. But failing to do an adequate job on the defensive end when he is in at center can't happen, and Horford was an absolute trainwreck on Tuesday, which is something we've seen more and more often lately. In fact, there were plays when he straight up didn't make an effort to contest shots at the rim, remaining flat-footed nearby as T.J. Warren and company glided toward the rim.

You brought this guy in to be a tone-setter, a culture builder, a mentor to Embiid and the best possible backup plan behind him. He left no bigger imprint on offense with Embiid out than in games with Embiid. Is the problem coaching? Is it the roster's clunky fit? Is it the aging curve catching up to Horford? There may be elements of all of those things. The bottom line is that he is being paid an enormous sum of money, and his signing came at the expense of other potential moves that would have brought (or kept) better-fitting players for this core.

The Sixers will not want to make any rash decisions this early in the lifespan of this group, but they need him to start showing signs of life ASAP because signing him indicated they were ready to win right now. We sure about that one?

• This doesn't all boil down to Horford, of course, and it would be foolish to ignore the other major players who flatlined Tuesday.

This team handed $180 million to Tobias Harris in the summer, and he spent a lot of Tuesday afternoon getting sauteed on backdoor cuts. They inked Ben Simmons to a max extension that hasn't even begun yet, and he has shown no ability to lift this group up without Embiid unless the Sixers are playing some bulls**t, bottom-of-the-barrel Eastern Conference team. It's great to see Simmons launch threes when the Sixers are stomping a Cleveland Cavaliers team that was in the midst of leaking stories about their coach. It's less great when they're up against a legitimate playoff team and he tosses a bunch of runners at the backboard and hopes they drop.

(Spare me any love for the box score from Simmons in that game. Numbers don't mean jack when you're in the process of being blown off of the floor by a less-talented team.)

These are guys the Sixers are calling and expecting to be stars, and they look like a bunch of forgettable players without the franchise player. At least in Harris' case, he has a multi-faceted game that can be tinkered with to account for different lineups and styles of play. In theory, Simmons should be one of the league's most versatile players. He may be on defense, but he has one plan and one plan only on offense, and it makes it hard to overcome adversity as a group.

• The difference between the Sixers and basically every other good team in the league is that they don't have a single guy on the roster who you look at and think, "Hmm, he might be able to shoot them through a bad night tonight." This doesn't even have to be a very good player, but you need guys who can swing games when a lot of the roster doesn't have it.

Who is the guy they have that inspires any sort of fear when they hit a shot and you think they might go on an extended run? For all his warts, at least JJ Redick brought that to the table.

More importantly, the Sixers just don't have guards in a league that has tilted more in more in favor of guards as the years have gone by. They have to win through brute force, which is extremely hard to do on a night-in, night-out basis.

• I am not picking on Norvel Pelle, who has actually been fine in my view this year, but using one of your two-way spots on a 26-year-old big man with Embiid and Horford on massive contracts is one of the most under-discussed goofy roster moves the Sixers have made and is in the same vein of trading up in the draft to Anzejs Pasecniks.

I'm not going to sit here and make the argument that there is some elite guard waiting to be signed to a two-way deal on the market, but having Pelle in that spot doesn't even give you a chance to upgrade the ceiling of the roster/team. The only path to him playing in minutes that matter is one of your highly-paid players getting hurt or traded. And instead of trying to find and develop someone the Sixers might be able to use to augment the strengths of the talent on-hand, they have committed to having an emergency big behind the insurance policy that isn't working. It's checkers management in a chess league.

• Perhaps you are the sort of person who believes the Sixers are a "flip the switch" team who will turn into something special in the playoffs. We have seen groups like that before, and most of those teams are battle-tested, either having won titles or at least made deep runs in the playoffs together.

The Sixers carry themselves like that sort of team. But they have done nothing to earn the right to do that. They are an extremely talented team that can play with the best of the best at home but continues to lose on the road, and continues to struggle with focus and execution night-to-night. They are a team built around the idea that they can beat the crap out of teams on defense, but that is a style that only works if you actually play like you give a damn for 48 minutes every night. When the effort goes away, the Sixers are just an expensive, ill-fitting cast of characters who can't really score and don't make each other better.

That sort of matters, considering where the Sixers are in the standings and how tough all the teams ahead of/around them are. They're not just going to pick up free wins by showing up with a lot of talent to games in Miami, Indiana, Toronto, and Boston, and as they've shown, even the full-strength Sixers are capable of dropping games to bad teams.

For all the excuses that come along with not having Embiid, look at the Pacers team they just lost to. Victor Oladipo has been out for nearly a year. Malcolm Brogdon, their big offseason acquisition, played a total of eight minutes before exiting the game, and the Pacers lost those eight minutes. The rest of the Pacers kicked Philly's ass anyway. This group made T.J. Warren look like Michael Jordan.

So what do you do with this group? Is a red-faced coach going to come in here and get them to play harder? That will be the suggestion from many, and I have nothing to disprove the "new messenger" theory a lot of people are banking on being the fix for what ails them. When games like these add up for a team that has accomplished absolutely nothing, no potential solution should be dismissed.

At the end of the day, this Sixers team is what it is. When they show up and thrash someone when they play hard, it's not surprising. And it's just as unsurprising when they no-show a game and get their teeth kicked in. That would be unacceptable for a bad team. For a team that claims to have Finals aspirations? It's absolute garbage.