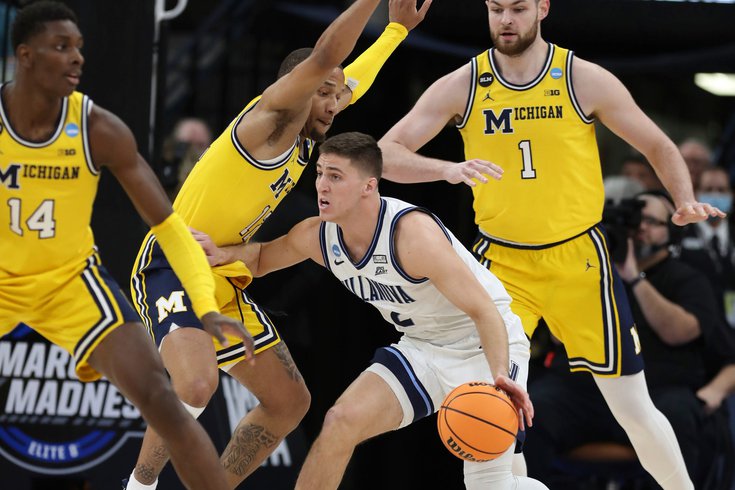 Villanova may not have been underdogs Thursday night in San Antonio — vying with the No. 11 Michigan Wolverines as the 2-seed and a 5.5 point favorite. But they certainly were undersized against the Big 10 school in the Sweet 16.

And yet again, as Jay Wright's squads seem to do year after year, the Wildcats played smart basketball and minimized mistakes en route to a confidence inspiring 63-55 victory.

Before the Wildcats hit the video and lace up to prepare for the Elite Eight on Saturday night, let's take a look at the good, the bad and the ugly from the Wildcats' eighth straight win as they become a real contender for a national title (and prepare for an intimidating battle against either top-seeded Arizona or No. 5 Houston):

• Oh boy, when the three pointers start falling this team is really hard to slow down. It's like the NBA's splash brothers, but basically with five long range shooters on the floor at all times. Leading by an unspectacular 12-11 margin after the first TV timeout, Collin Gillespie and Justin Moore drilled back to back long rangers to send Juwan Howard looking for Michigan's first timeout.

After missing four straight, Gillespie drained a pair of much needed bombs to help stabilize things and get the Wildcats back ahead, which is where they remained heading into the locker room.

Jumping way ahead to a tight two possession game inside two minutes of the other half, the Big East player of the year showed the ice flowing through his veins when he banged his fourth three of the game to bump Nova to a nine-point edge late, willing them to victory as Michigan showed signs of life.

• Speaking of Gillespie, the fifth-year senior has appeared in 11 NCAA Tournament games and will play in his 12th in two days, which is damn impressive. Consider that the maximum you can appear in is six in one postseason, he has a body of work as impressive as any Wildcat.

• For those who don't know, Michigan's big man Hunter Dickinson was the potential Achilles heal for Nova. Skying at 7-foot-1 (a full five inches taller than Villanova's tallest starter Eric Dixon), the sophomore center averaged just under 19 points and nine boards per game during the regular season and presented a big mismatch for the Cats down low.

The key was clearly to avoid getting into situations where the Michigan advantage would be apparent, down low on offense as well as on defense. There were a few occasions where Dickinson was able to go full Joel Embiid on whomever he was posting up on for an easy deuce.

Nova didn't let a big night from Dickinson — 13 points and 14 boards — determine the outcome, but boy was it hard for them to answer for their big foe. In future rounds, the Wildcats better hope they're able to neutralize some of the other talented centers still in the tournament.

• The Wildcats ball movement at time is like poetry in motion. During one half court set midway through the second half, the Cats swing the ball around the horn as they dodged defenders to set up a Caleb Daniels and-one at the basket during a key stretch inside the eight minute mark with the Wolverines stirring.

One of the under-appreciated weapons of this Nova team is its ability to create a basket off the dribble with penetration when they absolutely need it. Samuels had a key bucket by that recipe to extend a tight game to six points around the two-minute mark.

• A 24-second violation relatively early was not a good look for the Nova offense, as a fairly open three pointer was passed up as with the clock ticking down, resulting in a loss of possession. At its worst, the Nova offense in the half court can be very slow and deliberate and it is nice to see this team knows how to avoid falling into that trap.

• In a relatively low scoring first half, a 7-0 run toward the end of the stanza by Michigan completely altered the game's momentum — and a lot of it was due to some rare bad decision-making by the Wildcats, who were perhaps a bit too cautious on offense and not fully aware on defense.

• This is only technically bad — however, since the Wildcats won it's probably not something worth losing sleep over — but Nova essentially got all of its scoring from Gillespie, Moore and Jermaine Samuels, who combined for 49 of the team's 63 points. In prior rounds in this tournament, and throughout the regular season they were a very well-rounded offense that typically spread the wealth. Having three guys score 78 percent of your points isn't a recipe for winning in the long term but it was no problem Thursday.

• Leading up to the final TV timeout, a huge Eli Brooks three-pointer cut Nova's lead to six, and an offensive foul gave them the ball back heading into the team meeting. Michigan score after the break. A four point game is a much more dramatic situation than a nine point one.

• Back to back to back turnovers (yes, three in a row) when trying to ice the game inside 90 seconds is not something that will have Wright feeling warm and fuzzy after what should have been an easy breezy victory. Michigan full court pressure did the Wildcats in twice, and artificially kept the Wolverines in it for much longer than a clean final minute would have otherwise.

• On the subject of fouls, how many games in this NCAA Tournament — and in televised basketball in general loose all their intrigue toward the end due to an endless stream of desperation fouls and timeouts. Inside one minute in this one, Michigan had just three fouls in total — meaning they would need to commit four more to get Nova to the line shooting. I have said this before and will say it again, what is wrong with the Elam Ending?