5 reasons why Villanova can win the national title this year 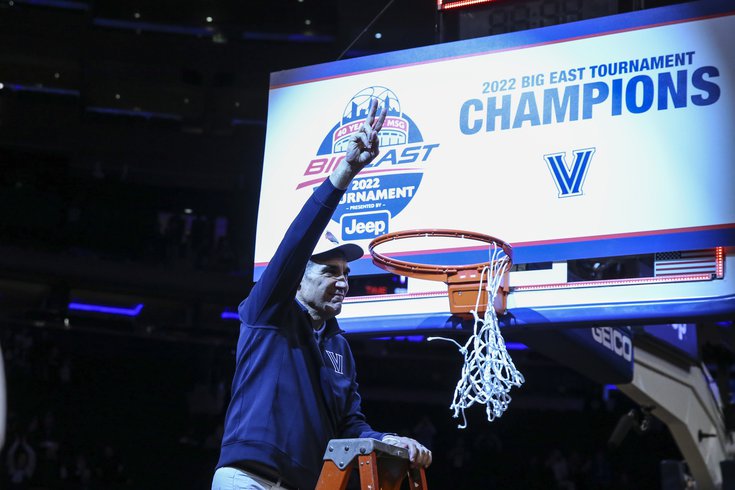 Jay Wright is leading Villanova to its 16th NCAA Tournament appearance this year since taking over as the head men's basketball coach in 2001.

The 2022 NCAA Men's Basketball Tournament kicks off Thursday, and just like in years past, the Villanova Wildcats enter March Madness playing their best hoops of the season.

The Wildcats closed out the regular season winning seven of their last eight games to finish second to Providence in the Big East Conference at 16-4 — despite winning both regular season matchups over the Friars.

Villanova's strong play continued over to the Big East Tournament last week at Madison Square Garden, where the Wildcats defeated St. John's, Connecticut and Creighton to capture the school's eighth conference tournament title and fifth in the last seven years.

Standing at 26-7 overall, the Wildcats earned the No. 2 seed in the South Region and will face Delaware in the first round of the NCAA Tournament on Friday. This year marks Villanova's ninth consecutive appearance in the Big Dance.

Seeking their third national championship in six years, the Wildcats have their sights set on the Final Four in New Orleans. Here are five reasons why Villanova can cut down the nets again this spring.

Villanova enters the tournament with one of the most efficient and balanced offenses in the country.

But while Villanova's offense is one of the most efficient in the nation, it is not one of the highest-scoring or most up-tempo styles. The Wildcats rank 150th in the country in points per game and 345th in pace this season.

However, don't let those offensive metrics concern you. Villanova loves to play at a methodical pace in the half-court.

When Villanova's offense is at its best, the ball movement is a work of art. Players are passing up good shots for great shots. It forces opposing defenses to have to stretch the floor, thus creating open lanes for the Wildcats to attack the basket. And if a shot at the rim isn't there, Villanova will either get to the free throw line or kick it out to wide-open players on the perimeter to knock down threes.

Given how important ball movement is to its success, Villanova's offense is totally team-oriented. If only one or two guys carry the scoring load, the offense tends to struggle. But when there's a balanced scoring attack and everyone is getting involved, it's nearly unstoppable.

That, however, wasn't the case all season for this Wildcats team. When opposing teams would double point guard Collin Gillespie and take Villanova's best player out of the game earlier in the season, others would oftentimes struggle to step up offensively and fill the void. If an opponent could cut the head of the snake off, that would all but spell doom for the Wildcats.

But as the season went along, Villanova's offense developed and became less dependent upon both Gillespie and three-point shooting to win. It was most-recently on display in New York City last week when players like Justin Moore, Jermaine Samuels, Brandon Slater and Caleb Daniels all had strong showings at the Big East Tournament.

Villanova's balanced offense will need to continue if it wants to be in New Orleans in early April.

Defense is a hallmark of a great Villanova team, and this year's squad has what it takes to win it all.

But Villanova's defense can put opposing offenses in a chokehold. Opponents average only 63 points per game against the Wildcats, which is among the lowest in the nation this year.

Villanova's 2016 and 2018 national championships, especially the former, were won behind great defense. The Wildcats can't expect to do the same in 2022 without a strong defensive performance in the tournament.

Other advanced metrics show that Villanova has what it takes to win the national title this year.

The Wildcats stand at No. 7 in this year's NET Rankings, highlighted by their 17 Quad 1 and 2 wins and 4-1 record on a neutral floor.

Villanova also played one of the most difficult schedules in the country this year. Its conference schedule consisted of 12 games against tournament-bound teams, and the Wildcats' non-conference slate featured matchups against the likes of Baylor, Purdue, Tennessee and UCLA.

All the analytics point to Villanova being able to make a deep run in the Big Dance.

This year's Villanova team, like previous squads, brings a wealth of leadership and experience into the tournament.

That all starts and ends with the aforementioned Collin Gillespie, the fifth-year senior who returned this season after missing last year's NCAA Tournament due to a torn MCL.

This season, Gillespie has been even better than last year. His team-best points and assists per game averages earned the Philadelphia native Big East Player of the Year and first-team All-Big East honors for a second consecutive season. As the Archbishop Wood graduate goes, so do the Wildcats.

Gillespie and fellow fifth-year senior Jermaine Samuels are two of the last remaining pieces from Villanova's 2018 national championship team. Meanwhile, most of the Wildcats' key contributors this year were part of Villanova's team that advanced to the Sweet 16 last season.

This group has played in plenty of high-level non-conference, Big East and postseason tournament games. The Wildcats won't be intimidated by any matchups in March.

When it comes to leadership and experience in March, there isn't a better example of that than the man on Villanova's bench: Jay Wright.

The only coach in this year's tournament with more rings than Wright is Duke's Mike Krzyzewski, who will retire at the end of the season.

Wright has been through the battles of the tournament. He knows as well as anyone how important it is to zone out the surrounding distractions when you have multiple days or only 24 hours to prepare for an opponent.

Wright will have his Wildcats ready to play and execute their gameplan at a high level.

What could derail a Final Four trip for Villanova?

While Villanova appears poised to make a deep run in March, there are some factors that could slip up the Wildcats.

Villanova typically doesn't beat itself. The Wildcats tend to not make many mistakes or commit lots of turnovers. But opposing teams that have sought to press Villanova full-court have had some success in forcing the Wildcats into turnovers and disrupting their ability to get into a rhythm offensively. Opponents who can speed Villanova up and keep it from operating in the half-court could be problematic.

The Wildcats' lack of depth and size could also be an issue. Based upon what we saw in the Big East Tournament, it appears that Wright's rotation will be no more than eight players, featuring only one true big man in Eric Dixon. If Villanova gets into foul trouble in a game, that will make life much more difficult in March. And teams with a lot of size could be able to counteract Villanova's athleticism and versatility on the wings.

Lastly, Villanova's road in the South Region will not be easy. A trip to New Orleans could require the Wildcats to defeat the likes of Loyola Chicago, Tennessee and top-seeded Arizona, a team picked by many to win it all.

All in all, Villanova is playing its best basketball of the season at the exact right time. That alone is enough to count on the Wildcats having an extended postseason run and possibly bringing another championship to the Main Line this spring.