If anyone knows how to prep to face Villanova, it's Michigan's Phil Martelli 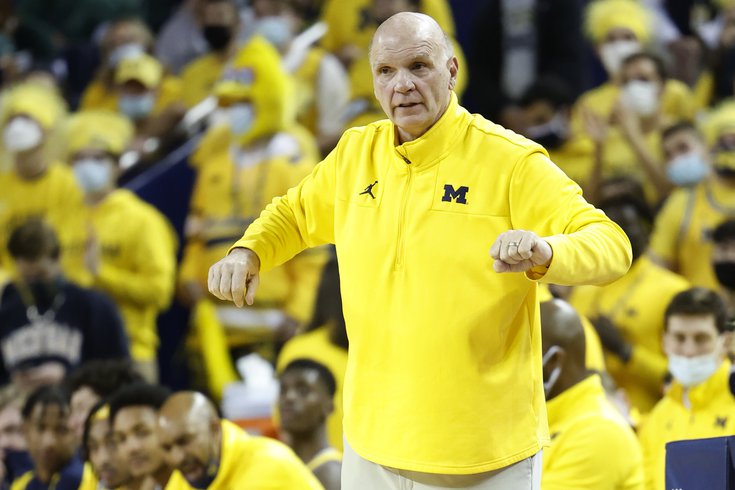 Phil Martelli will be coaching against a Big 5 foe again Thursday night.

On Monday, March 18, 2019, Phil Martelli wondered if he would ever smile on a basketball court in March again. The legendary St. Joseph’s Hawks head coach after 24 years had been fired. His heart had been torn from his chest.

Perhaps there is no better scouting report on Villanova than Martelli.

“We’ll be thoroughly prepared and it’s all hands-on deck, but my voice is not any louder than in any other game, not that this is any other game, this is the Sweet 16,” said Martelli, Michigan’s associate head coach who still retains a lot of fans and friends in Philadelphia who will be watching. “But this is an interesting sidebar. The Michigan guys might not get the life-and-death Villanova-St. Joe’s thing, and I haven’t faced Jay since I was at St. Joe’s.

“People see us going after each other tooth and nail for 20-some years and when we see each other, we’re like long, lost brothers. People outside of Philadelphia don’t understand that bond. Everyone who played in the backyards, or played tackle in the streets, you pound your brother, then you go home and pass them the meat the potatoes. I saw Jay last year at the downtown Marriott in Indianapolis last year, while we were in the (COVID-19) bubble. I went blowing into their meeting room and yelling who’s got the soft pretzels and water ice (laughs). “People see us hugging and the kids from outside the area see us and don’t know what’s going on.” Their bond is stronger than COVID-19.

As Martelli was talking, the Villanova women’s basketball team bus was pulling up to the Crisler Center, in Ann Arbor, Michigan, for the Wildcats’ NCAA tournament game against Michigan’s women (Michigan won, 64-49) on Monday night.

“You can’t get away from it,” Martelli said, “even as I’m talking right now. The Philadelphia basketball community is like a family, and regardless of where you go, you’re still connected. These last few years have been amazing here at Michigan. The basketball has been phenomenal. The level of basketball has been extraordinary. The people that I’m with have touched my heart every day.

“The respect with which I’m treated, it gives me chills at times. I feel so appreciative of the opportunity that I’ve gotten here and how they’ve embraced me, and how the Michigan program has allowed me to be me. I don’t have to be a corporate lawyer. The wonderment of these new venues, and of these new coaches, I never prepared for a Tom Izzo team, and we’re on national TV.

“Everything is so big that it’s all new to me. I feel new. I’ve been to the Sweet 16 before, but not like five years in a row, like Michigan. Taking a moment to reflect on myself, embracing the new has surprised. I never considered it work at St. Joe’s, and this is something I consider work.”

There is a renewed vitality to Martelli. He maintains he’ll always bleed and love St. Joe’s. He’s going to fight and claw to help Michigan win on Thursday, and he says that’s it’s going to be a herculean task because of how well he knows Wright and the Villanova program.

“Let’s say three years ago, in March, if you were to put these words in a sentence, ‘basketball’ and ‘smiling,’ I would have said, ‘I don’t know if that’s ever going to happen,’” Martelli said. “Now I can say, I have gratitude in my heart and my friends and relationships are always going to be there with St. Joe’s. That will never change. The new smile comes from the new relationships and the new memories.

“Juwan plays a big part of that. He’s a wonderful, wonderful, wonderful guy. The way I would describe us is we always don’t have to be talking. In the two weeks he was off, I knew that he trusted me, and in any kind of situation, I trust him. I don’t have all the answers, and I don’t always have be listened to, I just want to be heard. If you’re ever in a foxhole, you want to be in a foxhole with Juwan.

“He’s a good friend and I’m not sure this would have worked everywhere. There is a trust.”

Martelli knows the Wildcats like the back of his hand.

“There are many programs that run around preaching culture, culture, culture. I think it’s true when you watch Duke. I think it’s true when you watch Michigan State. At Villanova, I know it’s true. I absolutely, positively know it’s true. Villanova is not going to beat themselves. We’re going to have to absolutely win this game, because Villanova won’t crack. They do not beat themselves. That’s their greatest strength. The only way to beat Villanova is to beat them. Basketball is an imperfect game. That’s hard to do.

“You have to focus on you, and not so much focus on them. We were on a win-lose, win-lose, win-lose the last stretch of the season, though all against NCAA tournament teams. What I like about us last weekend was our stars were stars. Each guy has to do his part. We need everybody to star. We need anybody to be a superstar.”

Regardless of what happens in the end, there will be an emotional hug between Martelli and Wright after the game.

“What I would like is to have one more game on Thursday after midnight,” Martelli said. “My bucket list is to be up all night preparing for either Houston or Arizona.”