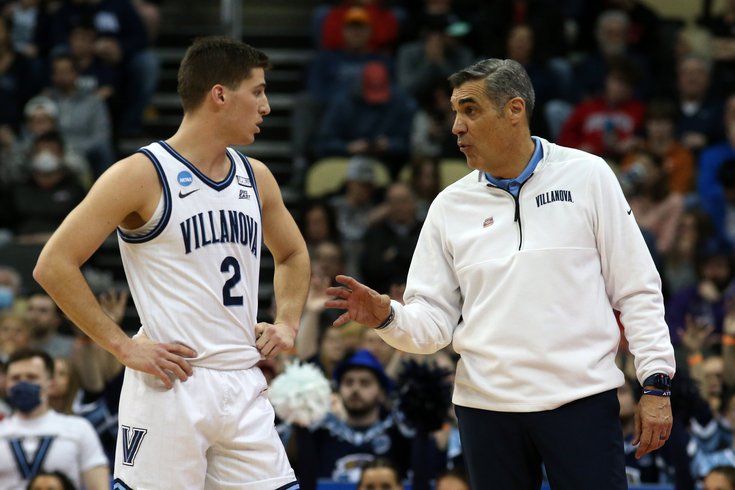 After a pair of double-digit wins to open up the 2022 NCAA Men's Basketball Tournament, the Villanova Wildcats will make their second-consecutive Sweet 16 appearance Thursday against the Michigan Wolverines.

This will mark Villanova's eighth appearance in the regional semifinal round under head coach Jay Wright and 20th overall in school history.

The second-seeded Wildcats advanced to the Round of 16 with an 80-60 win over Delaware in the first round and a 71-61 victory over Ohio State in the second round.

Now just two wins away from the Final Four, the Wildcats turn their attention to Michigan in the South Region.

The 11th-seeded Wolverines advanced to their second-consecutive Sweet 16 under head coach Juwan Howard with a pair of upsets over sixth-seeded Colorado State and third-seeded Tennessee in the first two rounds. This will be Michigan's 18th Sweet 16 appearance in school history.

Here are five things you need to know before Villanova faces Michigan in San Antonio, Texas on Thursday night. Tip-off is scheduled for approximately 7:30 p.m. Thursday on TBS.

A rematch four years in the making

Villanova has nothing but positive March Madness memories in the Lone Star State. The Wildcats' two titles in 2016 and 2018 were each won in Houston and San Antonio, respectively.

When Villanova last cut the nets down four years ago at the Alamodome, it came following a 79-62 victory over Michigan in the national title game. Now, four years later, the Wildcats and Wolverines will finally meet again.

Most of the players from that national championship game are long gone, but a few familiar faces remain.

Fifth-year seniors Collin Gillespie and Jermaine Samuels were both freshmen and key role players off the bench for Villanova's title-winning team in 2018. Now, Gillespie leads the Wildcats in points and assists, while Samuels is Villanova's leading rebounder and top shot-blocker.

The only remaining piece on Michigan's roster from the school's 2018 squad is graduate senior Eli Brooks. The point guard was a freshman and bench player for the Wolverines that season.

Now, the York County, Pennsylvania native is Michigan's second-leading scorer and passer. Brooks tallied 16 points and a team-high six assists against Colorado State before notching 23 points and a team-best five dimes against Tennessee.

A pair of efficient, methodical offenses

Villanova and Michigan's Sweet 16 matchup will feature two of the country's most efficient and methodical offenses.

Both the Wildcats and the Wolverines rank in the top 20 in offensive efficiency at 8th and 19th, respectively, according to Ken Pomeroy's college basketball ratings.

But expect this contest to be played at a slow pace. Michigan and Villanova rank 128th and 140th, respectively, in points per game. The Wolverines rank 202nd in tempo, compared to the Wildcats at 345th in the country.

Neither team is going to try to get out and run, but it will be imperative for Michigan to disrupt Villanova's offense in the half court.

The Wildcats are extremely disciplined and will not beat themselves, so Michigan will need to force turnovers and speed up Villanova in order to generate mistakes.

For the Wildcats, the difference could come down to free-throw shooting. Villanova's 82.6% clip from the charity stripe is the nation's best, while Michigan ranks 64th. If this is a close game late and the Wildcats are in front, don't expect Villanova to lose it at the free throw line.

An x-factor for Villanova's offense could be Caleb Daniels. The senior guard is averaging 12 points per game off the bench for the Wildcats in the tournament. Daniels' ability to knock down threes and rebound could be huge for Villanova in this game.

The starkest contrast between Villanova and Michigan is on the defensive end, where the Wildcats have a reasonable advantage.

The Wildcats have played well defensively in their first two tournament games, holding their opponents to a combined 23.4% shooting from three and forcing 23 turnovers.

Michigan's offense has looked very good in the first two rounds, but one area that Villanova could capitalize is in the turnover department. Michigan tallied 30 turnovers in its first two games, so that could be an advantage for the Wildcats on Thursday. Villanova will need to force turnovers in order to disrupt Michigan's half-court offense and take the Wolverines out of rhythm.

If Villanova is to win Thursday night, it will likely come behind a strong defensive performance.

Dickinson had a team-high 21 points and four blocks against Colorado State before earning a 27-point, 11-rebound double-double against Tennessee. Therefore, Dickinson could be a matchup nightmare for a Wildcats team that skews small.

Offensively, there's two ways Villanova can go about attacking Dickinson. The Wildcats will need to try and get the big fella in foul trouble and off the floor. That can be accomplished by getting to the rim and drawing contact.

The other way in which the Wildcats can neutralize Dickinson defensively is through sophomore forward Eric Dixon.

Dixon, who is averaging 12.5 points and seven rebounds per game through the first two rounds, has the ability to stretch the floor and knock down threes. If Dixon can draw Dickinson out of the paint, it could allow Villanova's guards and wings to get into the lane and find open shots at the basket.

Defensively, the Wildcats will likely throw multiple looks at Dickinson to keep the big fella on his toes. Dixon and Samuels will likely share the defensive responsibilities, and Villanova may even throw a double team at Dickinson when he gets the ball down low.

Slowing down Dickinson will be a tall task for Villanova; one that must be done if the Wildcats are to win Thursday night.

Thursday will be a big night for Philly college basketball and Big 5 fans, as two of the city's most iconic coaches will reunite in San Antonio.

Jay Wright and Phil Martelli know each other very well. From 2002-2018, Wright and Martelli faced each other 18 times as part of the Holy War between Villanova and St. Joseph's.

The first 11 matchups from 2002-2011 were more evenly-matched, with Wright's Wildcats winning seven times over Martelli's Hawks.

But after 2011, Martelli never defeated Wright again, losing seven years in a row before being fired by St. Joe's in 2019 following a 25-year run as the school's head coach. The lopsidedness in the rivalry was less a reflection of Martelli's coaching at St. Joe's and more so a validation of Villanova's status as the preeminent college basketball program in the region.

During his 25-year tenure at Hawk Hill, Martelli's St. Joe's teams were a consistent contender in the Atlantic 10 Conference and made seven NCAA Tournament appearances. His best team came in 2004 when the Hawks won a school-record 30 games and advanced to the Elite Eight behind Jameer Nelson and Delonte West. Martelli finished with the most wins in St. Joe's history.

Since leaving Philly, Martelli has served as Howard's associate head coach at Michigan for three seasons. Martelli briefly stepped in as Michigan's interim head coach at the end of the regular season while Howard served a suspension for his role in a physical altercation with Wisconsin coaches last month.

This will be the fourth time Martelli coaches in the Sweet 16 and the first time he ever faces Wright in the postseason. While Wright holds the head-to-head advantage, Martelli's wealth of knowledge and experience regarding Villanova will be crucial to Michigan's preparations for the Wildcats.

Thursday night's reunion between Wright and Martelli will be a sight for sore eyes in Philly.