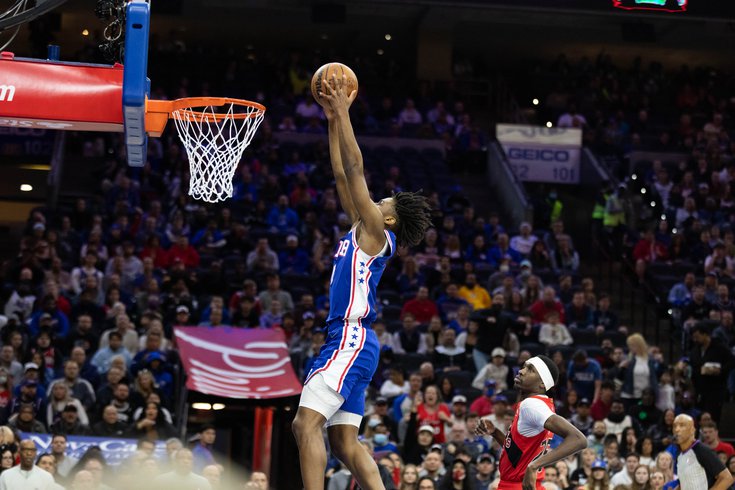 Tyrese Maxey dunks during the Sixers' game against the Raptors at the Wells Fargo Center on March 20.

You can make a Sixers fan happy by simply naming a few Tyrese Maxey stats from his breakout second season. His scoring average has more than doubled from a paltry eight points per night to 17.4 per game. Maxey's three-point shooting has risen by over 10 percentage points while jumping in volume by over two shots per game, the young guard posting elite numbers off-the-dribble and off-the-catch. Opportunity has brought results on almost every front, the second-year guard going from nice young player to feared scorer in what feels like the blink of an eye.

The most impressive thing about that jump, though, isn't the statistical production or the wins or the semi-frequent highlights he provides to the public nightly. It's the maturity he has shown throughout the process, the reverence for the big picture and his teammates, the understanding that his leaps forward are about something bigger than just himself. Exiting Philadelphia's dramatic win over the Miami Heat, the team down Joel Embiid and James Harden, Maxey heard his name shouted by fans throughout the arena and could think of only one thing — the depth guys who helped make that moment possible.

"I can’t take any of this credit," Maxey said after the game. "I’m looking at the stats right here, and guys like Shake [Milton] and [Furkan Korkmaz] and Paul Millsap started tonight, I don’t think he’s played in the last 10 games. Furk hasn’t played much. But for those guys to stay ready, and come in and play 31 and 27 minutes, it’s just a testimony to our group."

Maxey's reverence for the guys in Philadelphia's low-minute group stems in part from his own journey with that group last year, when Doc Rivers noted that Maxey and big man Paul Reed were two of the hardest-working guys in their program. As he struggled to get minutes for a Sixers team atop the Eastern Conference, the reports from behind the scenes never hinted at frustration or discouragement from the Texas native. This was just another opportunity to put work in, a chance to continue building to prepare for the moment when his services were required.

You could see the Sixers might be onto something when Maxey stepped on the floor in last year's playoffs and played fearless basketball, helping to save the Sixers in Game 6 of the Hawks series despite substandard outings from Joel Embiid and (naturally) Ben Simmons. In terms of his demeanor, rarely has anyone doubted whether Maxey had the right stuff to succeed in the league. But even an optimist has to be surprised by his rapid ascent, Maxey growing into a high-level shooter to round out his scoring package.

As recently as this season, the big question with Maxey was whether he would be a willing-enough shooter to be an essential piece for an elite offense. His acceleration, in-between game, and navigation amongst the trees inspired visions of a young Tony Parker in San Antonio, with the absence of an outside presence to match. Like many players on the Sixers over the last two seasons, there were plenty of record-scratch moments for Maxey on offense, though at least he had the off-the-bounce game to turn his hesitation into a decent look inside the arc.

Somewhere along the way, that all changed. Through 11 games in March, Maxey has taken more threes (59 of them, if you're counting at home) than in any other month of his career. With James Harden running the offense and relegating Maxey to the corner for decent chunks of games, Maxey has embraced his role as an off-ball threat, producing the best efficiency of his career to date as well. Maxey is at a blistering 45.8 percent from downtown in March, a number that would have felt out of reach on any reasonable volume just one year ago.

"He's just not scared," Doc Rivers said of Maxey's crunch-time performance against Miami on Monday. "He's so comfortable in the moment. My guess is as much as he works, you know, he's put so much work in his game, he feels pretty comfortable in any position. You put the work in, the more work you put in, the more confident you are. I think that's a great testimony for Tyrese Maxey."

Getting Maxey to trust that work has been a collective effort. Joel Embiid has ribbed him in press conferences to shoot more, nudging one of his best teammates to live with the results. Veteran Danny Green has nudged him, reminding Maxey that being the hardest worker on the team should give him the confidence and the right to let it rip whenever he has the opportunity. Over time, those messages have hit home and Maxey's accumulation of experience has ultimately allowed him to play free and loose. Monday's game-ending heater, it should be noted, came after Maxey missed his first three threes of the game, the second-year guard still sliding into position and keeping his hands and base ready because the offense needed him to do so.

When people talk about the structure of contenders, we tend to do so in very decisive and inflexible terms. This guy is the No. 1 option, this guy is the No. 2 option, and so forth. There's good reason for that, certainly, and Philadelphia's contention chances hinge on Joel Embiid frequently being the best player on the floor of each playoff game. But Maxey's responsibility as the clear third guy behind Embiid and Harden isn't to simply wait his turn and take the scraps those two leave for him, it's to understand what is required on a given night, whether that means him absolutely taking over a game or spending much of it in the background, picking his spots and otherwise allowing their star pairing to work.

As a supporting player, Maxey's development as a catch-and-shoot guy from the corners is almost unquestionably the most important development of the year. He is shooting a blistering 59.1 percent from the corners this year, a number that will almost certainly drop over time but threatens to remain high as a result of the attention paid to Harden and Embiid in the middle of the floor. Ultimately, it all spells doom for opposing defenses. There is risk in any decision you make with Maxey in the corner — he's a blow-by threat if you close out hard, he'll punish you for sagging, and his team's lead stars have more space to operate if you hug him tight.

And I don't know what exactly you do with him now that he has both the confidence and competence as an off-the-dribble threat. Even if Maxey is above his head as a pull-up shooter this year — I'm not necessarily willing to concede that, given his excellent free-throw shooting and touch from other areas of the floor — regression would pull him down to being a very good shooter as opposed to being one of the league's very best shooters.

It's no wonder he has been able to inspire trust and excitement in the team's MVP candidate, Embiid coming to Maxey before a game like this and trusting that he could be part of a winning effort, unlikely as that might have seemed to anyone on the outside looking in.

"To see Joel jumping around and his energy being out there, guys know that when your best player is out you want to go play hard for them and try to win the game," Maxey said Monday. "To be able to spread the court and kind of make plays for each other, get stops defensively, and then try to run faster because we don’t have our offensive superstars where we can slow the game down and give it to them and they bail us out. Play faster, play together, and just compete, go out there and fight, and try to win the game."

"[Embiid] told me he wasn't playing before the game, and he said go out there and help us get a W. I told him I got him... it’s just a great feeling, you know, to see the work that you put in come to life in a big game like that. I talked about it yesterday, last night in the same spot, talking about how we had the No. 1 team in the East coming in [with us] off of a back-to-back, and we were going to see what we’re made of."

Whatever Maxey is made of, the Sixers need as much of it as they can find. In year two, at 21 years old, Maxey is beginning to hit a level of consistency that should put fear in opponents. Slumps are brief moments, rather than extended issues. Bad halves are shaken off, approach adjusted as the game warrants it. And to his head coach's delight, Maxey is checking back into games with an understanding of what's working and exploiting those advantages himself, showing a student's approach to the game.

"He was awesome," Rivers said Monday. "When he came in, we explained to him very clearly what we were trying to do and we got that a lot. We got to the right place on the floor, he attacked, the 3s were great and more importantly, he made the defensive play to win the game. That was one hell of a block."

On its own, Maxey's development over the last two seasons is a massive organizational win. But it has come quickly enough that you occasionally wonder if he can give them the push over the top his two starrier teammates need. If not, he has supplied a season's worth of evidence to suggest there's more to come.